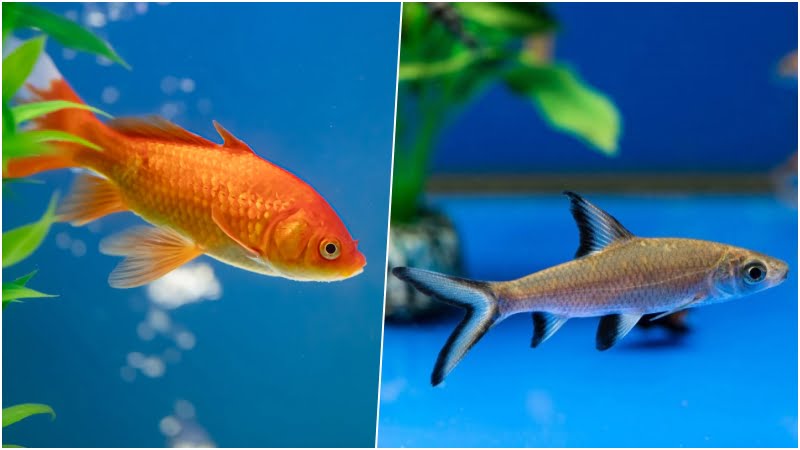 Bala shark are different from the “general shark” you see on the TV. The bala shark is a freshwater, tropical fish that is smaller, more peaceful, and easier to deal with. With these adorable characteristics, you may want to house it with your beloved goldfish, don’t you?

Come to think of it, you may want to understand their compatibility when living in the same aquarium. The collected information demonstrated in this article will give you sufficient compatibility background of bala shark with goldfish. I believe that you can find the answer here.

Can I House Bala Shark With Goldfish?

Keeping bala shark with goldfish may be ok, but this is just temporary. In the long term, it is imperfect and causes your fish to suffer from misery.

I’ve seen some owners keeping bala shark with goldfish together in their home aquarium. So, this means you can keep these two species together.

However, they do share the same food sources, temperament, and some other water conditions. Moreover, the bala shark is hardy, which means they have a high tolerance against environmental changes, thus, it is possible to keep them with goldfish.

Once again, environmental differences do matter as this can cause significant harm to your fish over a long-term period! So, to make sure either your goldfish or bala shark stay healthy and help extend their lifetime, you should separate them to avoid the negative effects of this hybrid situation.

As I have mentioned, the tropical bala shark and coldwater goldfish may have some similar aspects, but the differences can be more.

Let’s see the comparison and important explanation in detail.

The tropical bala shark and coldwater goldfish probably have several differences in their living water conditions.

So, here from the table, you can see that the bala shark and goldfish share the same water salinity, pH, and hardness levels. The vital differences that certainly affect their activity level and health are the water temperature and current.

Bala shark are fast and active swimmers so they prefer fast-flowing and strong water currents. Additionally, reports show that bala shark can be found in natural lakes, fast-moving rivers and streams.

On the other hand, the goldfish will be more enjoyable with the slow-moving water current. Their natural habitat is shown to be slow-moving rivers and streams, as well as low-current lakes.

With the different water current requirements, the goldfish can easily suffer from stress when in the same tank with the highly-active bala shark. The bala shark will require more space and a stronger current than the goldfish to swim happily.

Temperament is also a critical factor when choosing tank mates for your fish. Both goldfish and bala shark are peaceful fish. They also exhibit social behavior as they prefer shoaling in groups of at least 3 individuals of their same type.

Though both are not aggressive fish, they sometimes eat smaller fish. With such a compatible temperament, some owners might house bala shark with goldfish and haven’t noticed significant negative effects yet.

However, remember that the goldfish temperament can change owing to the environmental disturbance. You can read more about this goldfish issue here. Therefore, keep an eye on them to make sure they are friendly to each other if you plan to keep them together temporarily.

Goldfish and bala shark can share the same food sources because they are omnivorous. Both of them can feed on small crustaceans, rotifers, and insects and their larvae, as well as algae, and plant portions.

But the bala shark will need a high-protein diet as they grow and become larger very fast. Providing them with sufficient protein proportion can help them grow healthily.

Bala shark love heavily-planted tanks. They are easily scared so they need more hiding places and may spend a great amount of time being in caves or hiding behind the plants.

But if you put the goldfish into such a planted environment as that of the bala shark, this will be problematic. The goldfish love eating and uprooting live plants, so they may turn your tank into a “mess”.

Tank size also matters. The bala shark do best in a minimum 125-gallon tank, while the goldfish can thrive in smaller tanks. Thus, when the tank size is too small, this will distress your bala shark as they do not have enough space to swim around.

When thinking of pairing goldfish with other fish varieties, it is crucial to consider the water changing issue. Goldfish release a lot of waste and this can be built up in the tank very quickly. Thus, they need frequent and large water changes (weekly water change is recommended) to get their tank environment clean. The amount of water change is about 25 – 75%.

The bala shark, on the other hand, is sensitive to large water changes. Though they do need regular water changes to maintain good water quality, changing more than 50% of tank water can cause them to be shocked and even lead to death. Hence, changing about ⅓ of water each time is highly recommended for bala shark’s owners.

Keeping bala shark and goldfish together is not recommended despite some common aspects. Tropical fish and coldwater fish should be separated to ensure their healthy life.

The unwanted and significant negative impacts mainly come from the differences in water conditions. The goldfish is highly sensitive to temperature change. A sudden and rapid change in water temperature can lead to their death.

The bala shark is not sensitive to the temperature change but living in the unsuitable water temperature and water current for the long period can decrease their metabolism and disease-resistant ability considerably. The goldfish will also suffer the same health issues when in the same situation as the bala shark.

When their disease-resistant ability is degraded, they will be vulnerable to parasites and infections, which probably shorten their life span.

Therefore, bala shark should be kept with other tropical fish sharing the same temperament. Meanwhile, coldwater fish can be housed with other peaceful and friendly coldwater species.

Due to differences in water conditions between the tropical and coldwater fish, it is not recommended to keep bala shark with goldfish. Each of them needs to be in a suitable water environment to be healthy and happy. Yet, you can keep them together but just for a limited time, such as in the winter days as you don’t want your outdoor housed goldfish or bala shark to get frozen.