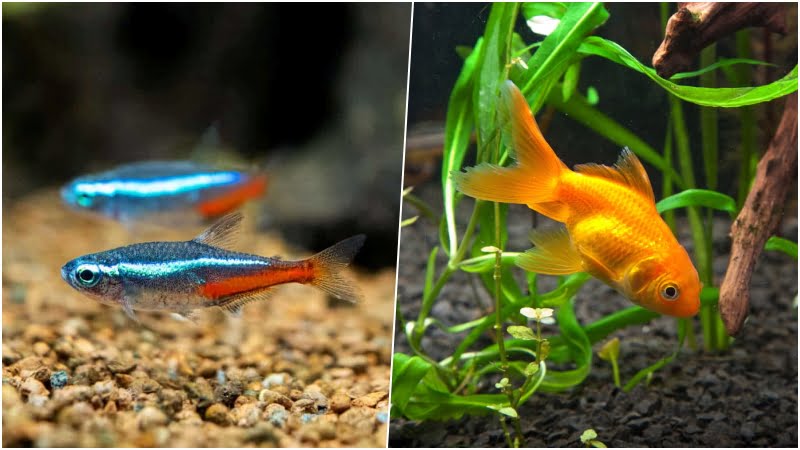 Both goldfish and neon tetra are sociable fish, thus they seem to be the ideal partner for each other. Unfortunately, in fact, they are not compatible. Housing neon tetra with goldfish may give them bad experiences and make them suffer a lot because they have different living habits and living conditions.

You will find 5 key differences between the neon tetra and goldfish, which are attributed to their incompatibility, so, just keep reading!

Why We Cannot Keep Neon Tetra With Goldfish?

The critical difference is that neon tetra are tropical fish while goldfish are coldwater fish. Tropical fish cannot thrive in the living environments of coldwater fish as there are several significant differences in their habitat, diet, and behavior.

Additionally, goldfish have a fast-growing pace, meaning that they will get larger very fast and can eat neon tetras if they are in the same tank.

Below are five key differences between the neon tetra and goldfish, which also are the reasons why neon tetra with goldfish is not a good tank-mate choice.

Besides, goldfish need foods that are specially made for them because of their digestion issue. The ideal food for goldfish is often flakes or pellets. Feeding them with food for tropical fish can make their digestion more difficult.

On the other hand, tropical food a the main feeding source for neon tetras. The neon tetras can also consume flakes or pallets of goldfish but in smaller pieces.

Typically, housing goldfish require a larger tank size than keeping neon tetras; for example, to keep a comet goldfish, you need to prepare at least a 30-gallon tank. Because goldfish grow very fast, they need huge tanks to thrive in and avoid stress. That’s outdoor ponds and very large tanks are recommended for goldfish owners to provide them with good living space.

Conversely, you can keep neon tetras in a small tank. So, if you add goldfish to be their partners, the goldfish will outgrow them and threaten your neon tetras.

Briefly, the small tank can considerably impact the growth and health of goldfish. Meanwhile, neon tetras are sensitive species that will be directly impacted by environmental changes, which means frequently adding and removing other fish varieties could harm their health.

Water changes have a high impact on neon tetras. They require a more stable tank environment with minimum water change than the goldfish. Too frequent water changes can stress your neon tetras out. They eat and produce waste less than goldfish. They don’t require much tank maintenance but owners still have to make sure their tanks are clean and neat. These are critical requirements you need to meet to maintain their health.

On the other hand, goldfish are messy fish. They produce a large amount of waste as they eat likely frequently and a lot, which makes the tank water dirty quickly. They actively swim around, nibble on things, and curiously explore their surroundings. When they root around in the aquarium, they can mess up the tank setting by moving the rocks, uprooting plants, and knocking over the tank decor. With such messy environments, water changing and tank cleaning should be done frequently for keeping goldfish healthy and active.

Therefore, keeping neon tetra with goldfish is not recommended. Frequent changes in water content make your neon tetra stressed. With these differences in tank environments, it is impossible to keep neon tetra and goldfish healthy and happy when they are housed together.

The disease resistance of neon tetra and goldfish are different. Goldfish tend to be more vulnerable to parasites when they are in warmer water since changes in water temperatures can lead to heavy stress for them. Thus, they cannot live well in a warmer water environment of neon tetra.

Tropical fish have the potential to carry diseases that are harmful to goldfish. In other words, neon tetras can transmit diseases to which goldfish are not able to be resistant. Therefore, the tetra could be healthy and happy, while its diseases are passed on to your goldfish.

Thus, in order to keep both fish healthy and disease-free, do not put neon tetra with goldfish in the same aquarium setting.

It is recommended to keep neon tetras in groups of at least six, but they will be more active when kept in groups of eight to 12 or more.

Besides, it is more distressing to them to be put in a tank with fish that are a threat than to be isolated. It is because they have to stay in certain parts of the tank and avoid larger fish for their safety. Therefore, leaving this situation for long periods will decrease their activity levels and negatively affect the health of your neon tetras.

The goldfish will probably outgrow the neon tetras, which definitely causes stress to the fish when you put the neon tetra with goldfish in the same space.

Goldfish generally exhibit friendly behaviors toward other fish, but they will get aggressive if the environment becomes overcrowded, making them a threat to a school of neon tetras.

There are two situations for you to consider.

If your goldfish is small-size, you can temporarily put them together and try to get another tank as soon as possible. They can live together for a maximum of the first four months, as four-month-old goldfish do not cause much mess and threat to your neon tetras.

If your goldfish is already medium to large-size, you should make a priority. This means you can keep only one species, neon tetra or goldfish, depending on which you prefer. When the goldfish is about six-month-old, they may threaten and even eat the neon tetra.

What fish can neon tetras live with?

They can live peacefully with other tetra species such as Cardinal Tetras and other fish species, including Guppies, African Dwarf Frogs, Mollies, Loaches, and Corydoras Catfish.

Is it necessary to get a heater for a neon tetras’ tank?

The answer is “Yes.”
Because they are from tropical regions, they can only do best in heated aquariums. Thus, for keeping neon tetra temperatures in balance, an aquarium heater is an important tool.

In this article, you will figure out that housing neon tetra with goldfish is impossible. Goldfish and neon tetras cannot live together due to the following reasons:

With these significant differences, you should keep the neon tetra and goldfish in two separate tanks to provide them with a comfortable living space, contributing to avoiding stress and disease for their better health.