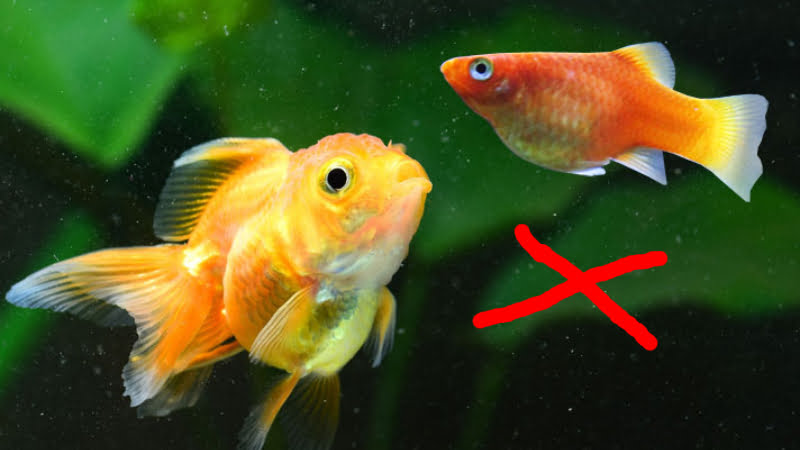 Platies and goldfish may theoretically coexist, but doing so is not recommended for various reasons. They have specific requirements for the water temperature, the size of the tank, and the food they consume. In addition, they are unable to live comfortably because of their behavioral problems.

This is a common question asked by those interested in aquariums, and there are also different thoughts on the subject of whether or not goldfish and platy can live together. Some individuals are of the opinion that if you set up an aquarium that meets all of the necessary requirements, then they will be able to coexist peacefully. However, experts advise against raising goldfish with platy since the downsides much outweigh the positives. Moreover, it is incredibly difficult to do so. As a result, we’re here to clarify the topic and give complete details.

4 Reasons Why Goldfish Shouldn’t Be Kept With Platy

According to what we’ve previously said, platy and goldfish should not be kept together in the same tank. They are two distinct species that need different living conditions. They are unable to accommodate one other’s requirements. Therefore, this will cause these two fish to feel unsettled in their comfort zone.

Below are the differences between platy and goldfish that we would like to describe in depth. Keep reading to understand why we advise you had better not raise them in the same tank.

In fact, goldfish are far larger than platies in terms of size. They may grow up to 12 inches long, so you’ll need a big tank to keep them. In general, they need a tank that is at least 50 gallons in order to live peacefully, while certain species, like the shubunkin and the comet, need tanks that are as large as 75 gallons. Additionally, if you want to produce a significant number of goldfish, you are going to require an aquarium that is quite a bit larger than the average one.

Platies, on the other hand, are characterized by their tiny size. The average individual is just 2.5 inches in length. Because of this, they will perform quite well in tanks of any size, and we cannot say the same thing for goldfish.

The vast majority of individuals are of the opinion that it is OK for goldfish to inhabit small spaces. However, we want to clarify that this is not even close to being true. By the time goldfish are adults, they have grown to be rather enormous, and it is just not possible to keep them in aquariums that are too tiny. In addition to this, goldfish create a great deal more waste, and the water in a tiny aquarium may become toxic very fast if it is not changed out on a regular basis.

Both platy fish and goldfish live in freshwater; however, they have different temperature requirements for their environment. Goldfish often perform well in water that is on the cooler side, with temperatures ranging from 60 to 74 degrees Fahrenheit. Hence, there is no need to install a heater in the aquarium for them.

In contrast, platies are tropical fish, and as such, they like to live in warm waters. The ideal temperature range for platies is between 72 and 78 degrees Fahrenheit. And, unlike goldfish, they do need a heater to be present in the tank in order to be alive.

In terms of the water parameters, platy and goldfish are relatively comparable because they call for a pH range of about 7.0-8.4 and the water hardness level up to 12 dGH.

It is clear that they are native to entirely distinct bodies of water. Therefore, attempting to house them in the same aquarium definitely poses a significant threat to their health and can usually lead to fatal consequences.

As was said before, it is possible that you may see aggressive behavior from both goldfish and platy fish. Because of their large size, goldfish will quickly become the dominant species in your aquarium. Because of this, please note that your platy fish could become a meal for the goldfish at any time. With that said, If you want your platy fry to have a chance of survival, you can’t breed your platys in the same tank as your goldfish. Or else, they will be eaten immediately upon the goldfish see them.

About the platies, in general, they are rather peaceful fish, and it is rare circumstances when they would cause any disturbance to the neighbor fish. However, we would like to call attention to the fact that they are really speedy fish, and the vast majority of the time, they will be the first ones to grab the food in the aquarium. This is something that we would like to emphasize. Therefore, if you aren’t paying attention, platies might deprive goldfish of their food, which would cause them to experience a serious deal of stress.

So, there is no doubt that these kinds of behaviors make platy fish and goldfish incompatible. Numerous instances of nipped fins and aggressive behavior such as pushing and pushing have been reported. As such, they can’t make good tankmates.

When compared to platies, goldfish are far more difficult to care for and maintain. Because of their enormous size, which we have already mentioned, the aquarium in which you keep them must be rather huge. In addition to this, they generate a significant amount of waste and have a rather high bioload.

If you don’t replace the water in your aquarium on a regular basis, harmful compounds like ammonia and nitrates may grow in the tank and harm the fish. And any sort of fish, even goldfish themselves, may die from these poisons.

In addition, if you have goldfish, it is highly recommended that you install a powerful water filter in their tank in order to avoid any of the problems listed above. Platies, on the other hand, are not as concerned about the filter and may be fine without it.

To sum up, goldfish pose a threat to your platies due to their high bioload, making them a danger to some harmful diseases. And this is another reason why you should not keep them together.

Choosing Tank Mates for Your Platy And Goldfish

It is important to consider compatibility in the following aspects when selecting tank mates:

When determining whether or not to keep a group of fish together, there are a number of things to consider. If you take the time to do research, you won’t have to worry about dealing with difficulties such as injuries, nutritional concerns, health problems, and so on.

Fish that get on well with goldfish

Your goldfish will live in a healthier, less stressful environment if you choose tank mates that are suitable for their needs. This will allow for all of the aquarium’s residents to live together in harmony.

Fish that get on well with platies

Platies, which are peaceful and energetic, should be housed alongside other fish with similar temperaments and water needs.

What are the chances of goldfish eating platys?

There might seem strange that a livebearer would be recommended for a goldfish tank, but Platies are chunky enough not to be eaten by a goldfish. Additionally, they are placid and will not nip at your goldfish because they are not aggressive at all.

What is the reason that my platy is biting my goldfish?

Fish, just like other animals, are capable of aggressive behavior. They will compete with one another in the tank to see who is the best. The platy fish are the same as other fish in the aquarium in that they may display aggressive behavior against the other inhabitants of the tank. Your platy could all of a sudden start biting his tankmates or swimming after the other fish for no apparent cause at all.

What is the main difference between platy fish and goldfish?

In spite of the fact that platy fish and goldfish do not like the same water conditions and should not be maintained together, there are a large number of different fish species you can choose to house with your platy fish or goldfish.

It is also important crural to research the needs of each fish and avoid any accidents in the aquarium by picking fish that have the same temperament.

I really hope that you have a better understanding of why you shouldn’t put goldfish in an aquarium with platyfish, and you could choose tank mates that are compatible with each other instead.