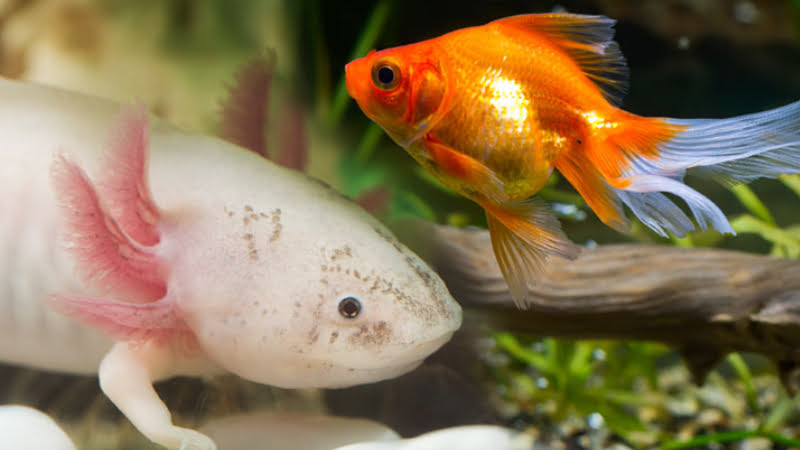 Axolotls are a type of neotenic salamander, found in Mexico’s Lake Chalco and Xochimilco. Their appearance is otherworldly and fascinating. There are lots of people out there who just love them, with some even keeping them as pets as a result, even though they aren’t exactly common!

On the other hand, a goldfish is a type of fish that is native to Asia and Eastern Europe. There is no doubt that these are by far the most common fish that are kept in homes around the world.

You can keep both of these animals as pets in an aquarium at home. There might even be some people who enjoy having both axolotls and goldfish, choosing to have both animals at the same time. However, you might wonder, “Can axolotls live with goldfish?” In other words, can they cohabit within the same aquarium?

In this article, I will answer that question for you, provide the reasons, and also recommend some compatible tank mates for your goldfish.

Can Axolotls Live With Goldfish?

Many people think that goldfish are a great companion for axolotls since they both enjoy cold. But, unfortunately, that’s not the case when it comes to these freshwater fish. It is quite a bad reputation that goldfish are known for being fin nippers. Then they also get big, so they are able to harass your salamanders even more.

Goldfish tend to nibble at the axolotl’s fins and gills, which causes the pet stress and injury. Also, as they typically produce a lot of waste, it isn’t ideal to have that added to the mess that axolotls already make.

Fancy goldfish are the only goldfish varieties suitable for an Axolotl tank. Compared to Axolotl, these fish are just as slow, giving them a chance to nip when they start to chase each other. It doesn’t take long for the goldfish to learn to avoid the axolotl. Although they are still a choking hazard when they are still small, it is even more so due to their slow movement.

The first thing you should do if you intend to keep fancy goldfish along with your axolotl is to get a large tank that can hold the mess created by the goldfish.

Why Keeping Axolotls With Goldfish Is A Bad Idea?

There are a number of reasons why you shouldn’t have an axolotl share a tank with goldfish, so for your to better understand the reason, let’s take a look at a list of some of the main ones.

It is important to realize that the tank setup for the two animals may be slightly different, and this might cause some issues when they are combined.

It is estimated that axolotls grow to be around 9 inches in size, and they require a lot of space since they do not like living in crowded conditions. It is also necessary to provide a goldfish with at least 20 gallons of water as their personal space in order to remain comfortable.

It is basically recognized that both animals require a lot of personal space, so when they are kept together, you will need a very large tank to keep them happy! But this doesn’t just come down to their comfort and preferences. An axolotl can lose its limbs or even die if it is kept in a crowded tank.

Lighting is also an issue. For some essential vitamins to be produced in goldfishes, they require lighting. The light also showcases their vibrant colors.

If you don’t have enough natural light, you will need full-spectrum lighting for these fish.

On the other hand, axolotls are nocturnal, which is why they are not fond of being in the bright light! Actually, bright light stresses them out quite a bit.

Having said all of this, it would be possible to get a tank that could house both species at once. I think it would have to be a very large, well-lit tank with plenty of shelters so that the axolotl could hide. It would be costly, and it would take a great deal of effort. It is therefore not recommended.

It is true that both species thrive in cold waters, but their specific ideal temperatures differ a bit. Goldfish need water that is at least 65 degrees Fahrenheit, or else they will stop eating, become lethargic, and eventually starve to death.

An axolotl, on the other hand, prefers to have a temperature between 60 and 64 degrees Fahrenheit, which is just below what the goldfish cannot handle.

Axolotls require meat to survive since they are carnivorous animals. They can consume any fish they can fit in their mouth. An adult goldfish may not fit in the mouth of an Axolotl, but the smaller ones will not be so lucky to become Axolotls’ meal.

The Axolotl is likely to attack at night when you and the other fish are asleep. Likewise, when goldfish live together in a tank, no matter how big or small they are, they tend to nip at Axolotls’ gills.

Filtration is one of the most important parts of any goldfish tank. If you have ever kept goldfish, you may know that they produce a lot of waste, which leads to ammonia, and this must be cleaned with a specialized filter.

However, the filter that can be used with axolotls is a sponge filter, which will not be able to remove the ammonia from the water. So…they are not a good match.

Keep These Goldfish Tank Mates Instead Of Axolotls

So, the answer to the question “Can Axolotls live with Goldfish” was no. Keeping Axolotls with Goldfish should be avoided. Now, you might wonder which tank mates Goldfish are compatible with. Let me help you find the most suitable tank mates for your Goldfish

If you’re looking for goldfish tank mates, one of the most important things to consider is the temperature of the water. Goldfish are eurythermal, meaning that goldfish have the ability to withstand a wide range of temperatures. Therefore, they can be kept either in tropical environments or room environments. Having said that, here are some of the best tank mates for goldfish that you should consider:

Zebrafish are excellent tank mates for goldfish as they are small, are not a nipper, and prefer cooler water environments. Further, they are herbivorous omnivores, a similar trait to goldfish, which makes feeding them much easier. Additionally, you do not have to worry about Zebrafish being eaten by Goldfish because Zebrafish are fast and large enough.

Dojo Loaches are probably one of the most common goldfish tank mates. Dojo Loaches can thrive in cool water which means that the conditions for goldfish will also be ideal for them.

Nonetheless, some aquarists have reported noticing aggressive behavior from these two species sometimes. You should be very careful if you decide to keep dojo loaches with your goldfish.

Can 2 axolotls live together?

Axolotls are not a social species, so they don’t require friends to be entertained. However, if you want to house two axolotls together, it will be fine as long as they are the same size.

Yes, axolotls can eat goldfish, even though goldfish isn’t the type of fish that axolotls favor to eat the most, they will be able to consume it nevertheless.
Both these fish prefer to live in cold water, you can introduce them into the same aquarium. But the goldfish should be very large, about twice the width of your axolotl’s mouth. Otherwise, axolotls will certainly swallow the goldfish whole.

Can you put guppies with goldfish?

The answer is YES, guppies and Goldfish can live together. However, you may want to keep in mind that bigger goldfish may be able to eat the smaller guppy fish. So, choose guppies of the same or larger size as goldfish.

Can tetras live with goldfish?

To sum up, can axolotls live with goldfish? It is technically possible for axolotls and goldfish to live together. Despite this, it is not recommendable, since their specific preferences differ, and their relationship will be incompatible.

If you insist on keeping them together, it would take a lot of time, effort, and money to adapt a tank to create the right environment for both animals at the same time.

You should keep them in separate tanks so that their specific needs can be met. And if you really want them to share a tank with others, why not try having them share a tank with different and more compatible species instead?