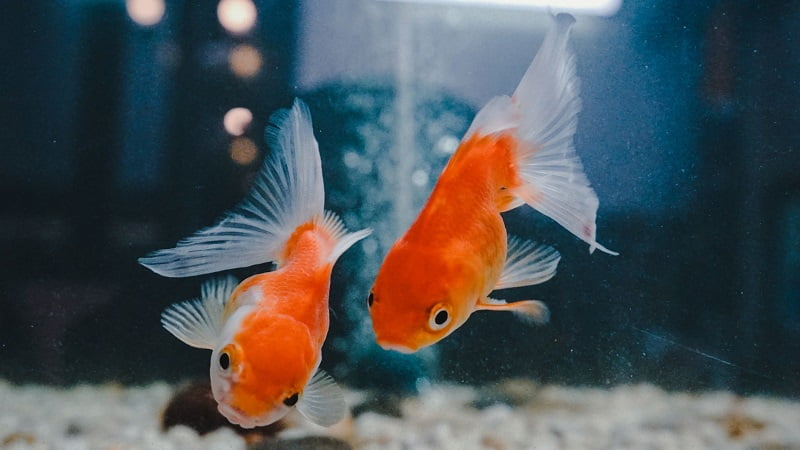 Various pieces of research have shown that some fish have big personalities, but how about goldfish? Do goldfish have personalities? If yes, what are the characteristics they may have?

Do Goldfish Have Personalities? – 3 Important Things

Goldfish do have personalities

Yes, goldfish do have personalities!

Their personalities may be different from species to species, but goldfish are generally sociable, friendly, and active, eager to explore the world.

For example, some owners have spotted the personalities of their fancy goldfish as silly, funny, enthusiastic, clumsy, and incredibly friendly. Meanwhile, others have shown that their goldfish is shy and somehow timid.

Fact: Goldfish are not aggressive and territorial fish, but they will eat their eggs if the eggs are not separated after their spawning period.

Goldfish personalities can be told through their behaviors

Goldfish have different personality traits which can be told by certain behaviors.

Personality can be represented as behavioral syndrome – a set of behavioral traits usually consistent over time and environmental conditions; therefore, specific personalities will have corresponding behaviors. Research shows that the personality of a fish can regulate its moving style in the environment.

Let’s take a look at the set of behaviors correlated with specific personalities of goldfish.

Goldfish personalities can be changed by external factors

Goldfish’s personalities (behavioral syndromes) can change depending on the environmental conditions and their owners.

Poor water conditions can trigger the alternatives to the behavioral syndrome of goldfish. Notably, poor water quality is usually related to pollutants in the water, which mainly causes stress to your goldfish. In other words, contaminants can induce critical stress responses and changes in the metabolism of the fish, thus leading to differences in their behavioral traits.

For example, studies demonstrated that pollutants, including Cocktail of French pesticides (atrazine, metolachlor, isoproturon, linuron…), can significantly impact or lessen their activity and foraging.

Other environmental stress-driven factors, such as crowding, inappropriate tankmates and tank size, or shortage of foods, can also change the personality of goldfish. In such situations, they will easily get more aggressive.

Let’s take food shortage and crowded conditions as examples. Several studies have demonstrated that hunger levels can stimulate the proactive levels of the fish, and thus, aggression is often a way for goldfish to approach the food sources. When their living space is crowded, the probability of food shortage is likely to increase. Thus, the goldfish show a tendency to “fight” for food. In that case, you will notice that they attack and bite other fishes in the tank.

According to scientific studies, associative learning capabilities and social learning abilities are vital in goldfish. They can also recognize human individuals because of their exceptional visual acuity.

Thus, they can be friendly and sociable to their owner while showing shyness towards other persons. If you are having goldfish in your aquarium, you may notice that they will swim to the front of the tank, or swim rapidly around the tank, and float at the surface to look for food. These are behavior traits indicating that they are showing favor to you, their owner. Meanwhile, when other people come near to the tank, they will hide.

After a period of time, goldfish will learn how to comfortably interact with their owners and other people with food. You may notice that they tend to “beg” for food whenever you approach their tank.

Video: Do Goldfish Have Personalities?

Do goldfish get excited to see you?

Yes, they will get excited when seeing the person that has fed them. Their incredible associative and social learning abilities help them to easily associate with humans, especially their owners.

Do goldfish have feelings?

Goldfish do have feelings. According to studies, goldfish have conscious awareness, which allows them to have emotions, such as lonely, fear, or pain. Moreover, goldfish are species that have different personalities, and so they may experience a different degree of sensitization.

Do goldfish recognize their owners?

Their exceptional cognitive abilities, including visual acuity, allow them to distinguish humans. Therefore, they can recognize their owners who regularly feed and take care of them.

In short, goldfish do have personalities, and their personalities can be different from species to species. You may find that your goldfish are friendly and active, while some will be more perverse towards others.

Moreover, their personality traits are somehow dependent on environmental conditions. Stress-driven environments (crowded and small tanks, lack of food, or pollutants) can cause them to become aggressive or less active.

You should notice the changes in their behavior traits to be able to provide suitable solutions in time so that unwanted injuries can be avoided.