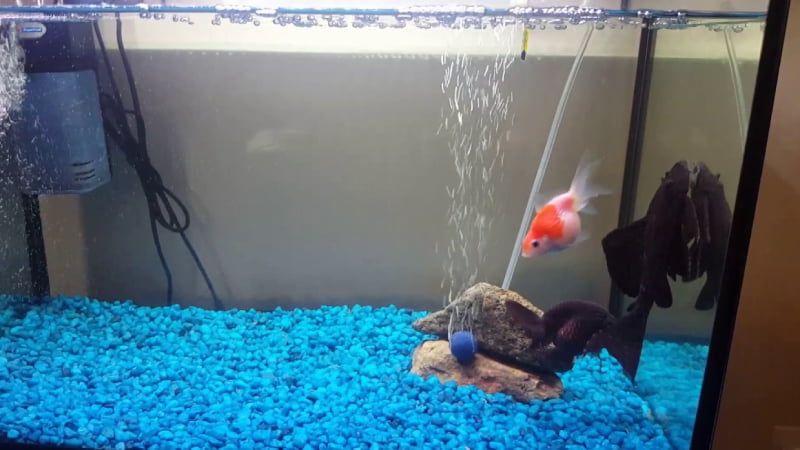 Finding a fish to pair with a goldfish in an aquarium may be challenging for many pet owners. Furthermore, it is suggested that Plecos is a viable choice. And there has been enough study done to determine whether or not Plecos and goldfish are a good match in this article.

Yes, plecos are excellent tankmates for goldfish. However, not every species of Plecos is capable of this. Only two species of pleco are able to coexist with goldfish without causing any damage.

You’ve come to this article to clarify any lingering questions about whether pleco and goldfish can be kept together, which pleco is the best goldfish mate, and why. It would help if you learned more about this before making an informed decision. Complete the article’s reading to learn all there is to know.

Can Pleco And Goldfish Get Along Well?

Many people believe that these fish are not a good match for most aquarium layouts. This is true to some extent. It is, however, naive to conclude that this indicates that they are incompatible in any way. Thus, are they compatible, and if they are, what should you watch out for when pairing them up?

It is not encouraged, but it is not impossible, to maintain pleco and goldfish together in the same tank, provided that the tank is large enough (at least 80 gallons). If your pleco is being given a diverse and healthy diet, it will have no negative impact on the goldfish’s nutritional needs. On the other hand, goldfish prefer cooler water, which is not suitable for certain pleco species that prefer warmer water.

Are plecos capable of eating or sucking goldfish?

One of the most compelling arguments against maintaining plecos and goldfish together is the possibility that plecos may suck on the slime coat of goldfish. It turns out that a goldfish is protected from sickness and potentially dangerous poisons by a slime-coating on its body. As a fisherman, you are certainly aware of this, and it is the reason why you should never touch a fish with dry hands since it may cause damage to the fish’s slime covering.

Anyhow, there’s a frequent misconception that plecos will always fiercely attack a goldfish or attempt to devour its skin at night.

A goldfish’s skin may be damaged or sucked on by a pleco catfish. This, however, is the most probable reason for its malnutrition. Due to their size, certain plecos need a lot of food in order to be healthy. The common pleco is a good example of a large species that exhibit this behavior.

Many people are unaware that a pleco purchased from a pet shop may grow to a length of 15 inches. The common pleco, a well-known species, falls within this category. Omnivorous and very tough, they are able to develop rapidly and become massive.

Feeding these plecos a lot of food is necessary since they grow in large numbers. Even while plecos are known to consume algae, it is a misconception that they can thrive on it alone. In the event that it is hungry or malnourished, it will most likely attempt to feed on your goldfish.

Herbivorous fish such as goldfish will not eat pleco catfish. It is possible that goldfish might occasionally take a nibble of small fish fry, but plecos are usually too large for them to swallow.

The Advantages Of Keeping Plecos In A Goldfish Tank

Plecos aren’t exactly eye-catching aquatic creatures. They spend most of their time in the bottom of the tank and only go out at night or when food like zucchini or bloodworms is placed in the tank.

Adding plecos to a tank is a good idea since they can consume a lot of algae. Goldfish aren’t going to consume so much that you’ll have to toss away your algae scrubber.

Therefore, you won’t have to spend as much time cleaning your tank.

That’s basically the only purpose I can think of for keeping a pleco in the same tank as a goldfish. As I previously said, the fish aren’t very interesting, and most people find them unappealing, even a little ugly.

A Guide To Introducing Plecos To Your Goldfish Tank

Plecos, like any other fish, are not simply relocated from one habitat to another. This might lead to major acclimation issues, which could harm both the new and old fish in the tank as a result of aggressiveness.

In goldfish aquariums, algae-eating fish such as the Rubber-lipped and Longfin Bristlenose Plecos may withstand the low temperatures. Being able to tolerate the same temperature range as a goldfish makes these two Pleco fish species excellent aquarium mates.

The most important factor in determining whether species may live in the same habitat as goldfish is the maximum allowable temperature. Changing the aquarium’s temperature to fit the sort of goldfish partner you choose is not suggested. Because of these unbalances in the new environment, neither species will be able to live their lives to their full potential.

In order to have the best deal, one would have to find a species that can live in the same conditions as goldfish and can, therefore, naturally live within them. Furthermore, the slime that covers goldfish is a difficult prey item for these two Pleco species. As they are non-aggressive, the goldfish may spend their time freely without fear of being disturbed. Hence, they’re excellent companions for goldfish.

An additional fish is essential to the goldfish’s long-term survival. In their native habitat, goldfish often eat on algae and other substrates. As a result, introducing algae to your goldfish tank will help vary the fish’s diets. Additionally, this generates a micro-environment that resembles the natural world. Goldfish are also known to like nibbling on algae on a consistent basis. Nevertheless, if the algae are not controlled, they may grow out of control and leave stains on the aquarium’s walls. This might be harmful not only to the goldfish but also to the surrounding ecosystem.

How much aquarium space is appropriate for goldfish and plecos companions?

Goldfish, by nature, need a lot of room to flourish. Because of the large amount of ammonia they emit, they make a mess of their surroundings. This means that living in an environment where resources are limited is stressful.
Additionally, in terms of family requirements, goldfish are not very demanding. However, it’s not a good idea to eat fish alone. You may, therefore, keep a goldfish and a Plecos around to keep the place occupied. A goldfish tank must have at least a 20-gallon capacity in order to meet the minimal criteria. A larger tank will be necessary if you want to maintain additional goldfish or a fish friend.

What is causing my pleco to chase my goldfish?

When they are young, plecos are exclusively aggressive against other plecos. As a general rule, bigger fish are less likely to come into contact with smaller ones. When the pleco is the tank’s biggest fish, it may seem to be hostile, but it is only performing its job.

What are the chances of a pleco attacking a goldfish?

Closely monitor the situation in your aquarium. As a matter of fact, your goldfish may be attacked or fed upon by your pleco. In order for your fish to get along, it is critical that you maintain a close check on their behaviour at all times. The film that surrounds plecos’ lips may be eaten by them.