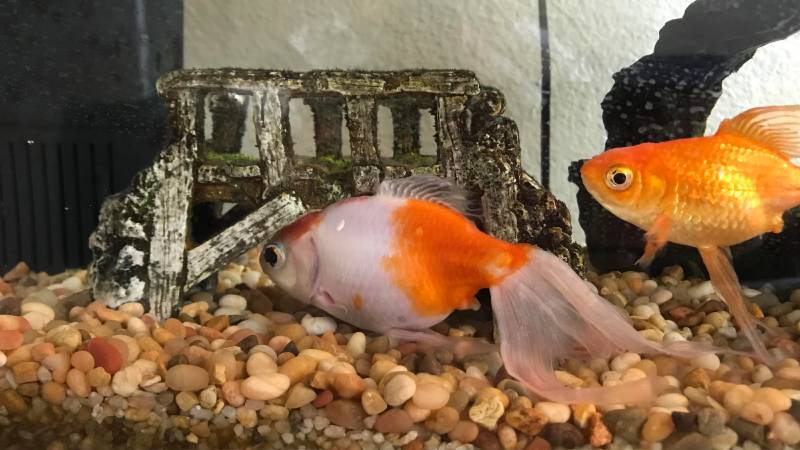 It is well known that goldfish are active swimmers. In fact, you can often see them swimming constantly and exploring the environment around them. Therefore, it may come as quite a surprise to you when you find them hiding unexpectedly. That is the time when you might wonder, do goldfish like to hide? And do goldfish need hiding place?

The answer is no. Goldfish don’t like to hide. Despite this, they prefer a hiding place to rest and ensure that they are safe from any threat. Goldfish, in most cases, hide when they feel threatened, are stressed, are suffering from illnesses, or when their habitat changes due to excessive current, overcrowding, or any other reason.

I would like to discuss this topic a little more in-depth in this article.

Every living creature needs to have a place where it feels safe and secure. Goldfish are no exception. In many cases, when you provide your goldfish with a hiding place, they will feel more comfortable. Having such a place will also allow them to rest peacefully.

In fact, sometimes giving your goldfish places where they can hide can also help to reduce their stress levels. It is very likely that any goldfish that is timid will appreciate the fact that it will be able to stay safe and out of the way of other aggressive tank mates, and then it will be more than happy.

The hiding place can also be used in any of your goldfish which are in a state of stress due to sickness.

The plants, rocks, caves, and ornaments that are placed in your aquarium can be used to provide hiding spots for your goldfish.

Your goldfish will begin to interact with its other tank mates once it has felt safe or has recovered from sickness, and will begin swimming freely in the aquarium.

Is It Normal For Goldfish To Hide?

The art of watching their little goldfish swim around the aquarium is a very entertaining pastime for many aquarists. There is nothing better than watching and enjoying the beauty of a goldfish. It is, however, a cause for concern if your goldfish begin to hide more frequently.

You need to notice if your goldfish is hiding most of the time, as this is a very clear sign that something is bothering them. This behavior needs to be understandable from the beginning, and you need to take appropriate steps to make your goldfish feel as comfortable as possible in their habitat.

Next, we will discuss the various reasons that will make your goldfish hide and how you can make sure they are comfortable while in the aquarium.

Why Do Goldfish Hide? How To Prevent Goldfish From Hiding?

There are many reasons why your goldfish hides. Let’s discuss them one by one.

In some cases, a new goldfish will hide if introduced into a community tank that has other fish, as he or she is uncomfortable with its other tank mates. Your tank is an entirely new habitat for the newly introduced goldfish. As such, it is going to need some time to get accustomed to the new environment. In just a few days, it will get acquainted with the new environment, feel comfortable and start interacting with its tank mates.

How to prevent this: The good news is that you don’t have to worry about it too much. The new goldfish will get used to his new surroundings within a few days.

Overcrowding is another reason why goldfish hide. They need enough room to move about and swim freely. Space will be an issue if you have a small aquarium and too many goldfish in it at the same time. Due to territorial issues that can arise, goldfish might become aggressive toward each other. When this occurs the timid goldfish will begin hiding as they will not be able to cope with the other aggressive goldfish in the tank.

How to prevent this: Either you can buy a large tank for the fish or you can move some fish into the new tank. As a result, all of your goldfish will have ample space to live in harmony with each other.

The goldfish is a fish that thrives in such slow-moving aquatic environments as ponds, lakes, and rivers. If the water current in your aquarium is too strong due to a strong filter, your goldfish will be forced to hide as it will not be able to freely swim around in that situation.

How to prevent this: Choosing a low-current filter or adjusting the aquarium’s current can help you to prevent this from happening. In this way, you will ensure that the current is evenly distributed throughout the aquarium, and your goldfish will not experience strong currents in just one part of the tank.

Goldfish hide when they are ill and this is one of the most common reasons for their hiding. Your goldfish will hide when it is ill as it is seeking protection for itself. Another thing about sick fish is that they are usually not very active and will separate themselves from the rest of the group. Instead, they will hide in places where they can rest a little.

How to prevent this: Make sure to check the health of your goldfish if it is hiding. Once you find out about the illness, you can treat it immediately so that you avoid infecting the other fish in the aquarium. In an alternative way, you could remove the sick fish from its tank and keep it quarantined in another tank so that it gets the care and attention that it needs.

Goldfish will hide if they feel threatened. They might not necessarily be threatened by the other fish in the tank. Occasionally, your goldfish may feel threatened if there is a loud sound or someone constantly walking around the tank.

How to prevent this: The best way to prevent this is to place your aquarium in a quiet area. Additionally, it is also advisable for you to move slowly around the tank in order to ensure that your goldfish do not perceive your movements as a threat. Your goldfish will eventually get used to your movements, and it will not be affected by them anymore.

Goldfish that hide in your aquarium can also be due to poor water quality. In the event that the water conditions are not favorable, this can result in sickness or stress in your goldfish, which will cause it to start hiding. We should take into account factors such as sudden changes in the water temperature, dirty water, and pH changes when looking into this issue.

How to prevent this: Once you have identified the changes and have stabilized your tank, your goldfish will be able to once again feel relaxed and will stop hiding.

Your goldfish is also likely to hide when they are stressed out. There are many reasons why your goldfish may feel stressed, for example, if it is sick, bullied, the tank is overcrowded, or if there are any unfavorable conditions within its habitat.

How to prevent this: By providing your goldfish with favorable conditions, you can reduce their stress and help them live a long and healthy life.

Goldfish are able to live on their own without any company. However, if the goldfish have been bought from a pet store where they had been kept in a group, then you should be cautious. In a new environment, your goldfish may start feeling lonely and may decide to hide.

Video About Goldfish Hiding In a Rock

Why do goldfish hide in the corner?

When there is any change in the environment, the goldfish may hide in the corner. There may be changes in your water’s temperature, pH level, chemistry, or a rise in nitrate levels in the water. The goldfish will stop hiding whenever the environment is stabilized at its optimum conditions and will once again be able to swim freely.

Do goldfish hide when they are dying?

When goldfish are dying, they do tend to hide. The reason behind this is the fact that they get sick or they are suffering from some kind of illness. When goldfish get sick, they become stressed and begin to hide. It is advisable to quarantine your goldfish in a separate tank for treatment if you find they are hiding due to illness.

It is good to maintain plants in their tank, variety in their food, a large, clean tank with a stress-free environment, plenty of oxygen in their tank, nice, cold, soft water, and other goldfish mates and some decorations.

In short, goldfish are a kind of fish that do not like to hide. But it is possible that they will hide sometimes. That’s why we have to provide them with some hiding place.

There are many reasons for your fish hiding. Goldfish, in most cases, hide when they feel threatened, are stressed, are suffering from illnesses, or when their habitat changes due to excessive current, overcrowding, or any other reason. You should find out the answer and prevent it.