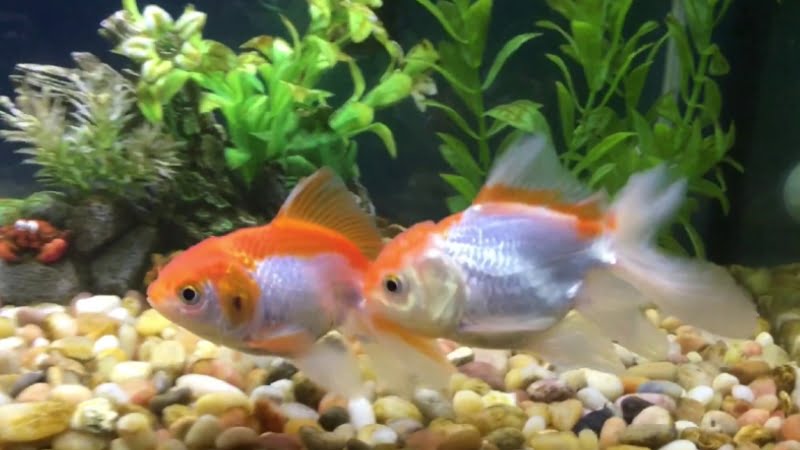 It’s hard to tell when your goldfish playing or fighting because the actions can be very similar. Allow me to show you the essential tips you need to know on how to distinguish between the act of playfulness and aggression. And, I have some small pieces of advice for you on how to avoid the hostile situation and keep all your goldfish safe.

How To Tell If Your Goldfish Are Playing Or Fighting

There are 3 aspects I find crucial when deciding if goldfish playing or fighting. Hopefully, this helps.

Do They Nip At Each Other?

However, the nipping can simply be an aggressive way of playing around with your goldfish. It depends on the attitude, the aftermath, and how each one reacts to the nipping. Furthermore, we have to consider if the fish are recently introduced into the tank or not. New fish sometimes have to deal with bullies when they first arrive.

For example, if one fish tries to nip the caudal fin of another and the other swims towards a corner to hide, and you notice significant injuries or cuts on the fin, it’s 100% undeniable that the fish are fighting. On the contrary, if there are no severe cuts on the fin and the “victim” turn around and nip back, there is a high chance that they are playing.

Chasing Can Be A Normal And Playful Case

As I mentioned above, chasing can be playful between the fish. It’s normal for them to swim alongside each other. In fact, they might also be working to grow their families in the near future. When a male fish wants to mate, he will chase the female until she accepts the act and releases eggs into the water. Later, the male will introduce milt or goldfish sperm to fertilize the eggs.

Some Hide Inside Caves Or Decorations More Often

If you find one of your goldfish hiding more than usual in caves, pieces of decoration, under large leaves underwater, etc., it may be experiencing bullying from others and has to find a place to hide from the aggressors. The best way to handle the situation is separate this one from others and allow it to have time to heal and reduce stress.

How To Prevent Goldfish From Fighting

For me, these four tips are the easiest to follow to prevent goldfish from fighting.

A small tank with a dense population is not a great combo for any kind of fish, including goldfish. My advice is that you give them extra space, so that tank members don’t have to bump into each other frequently. Depending on each breed, a goldfish can grow up to 6 inches.

We follow the same tank size rule as with other species: each inch of fish needs 2 gallons of water to swim freely. For example, if you have a pair of goldfish and both have reached 6 inches in length, you will need a tank of at least 12-gallon big.

Also, please don’t put goldfish in a bowl like in the movies. The space is too narrow for them to develop normally. They will die prematurely before even fighting each other in the long run.

Furthermore, it’s vital to keeping mind other factors that go into the tank, like a water heater, filter, sand, greens, decorations, etc. Each element occupies some space. So we need to add things up and get a bigger tank as a result. A 20-gallon tank would be perfect in this case.

Don’t Occupy All The Space With Deco

Occupying all the space with decorative pieces will restrict the swimming patterns of the fish and make them feel trapped or crowded. And we understand that this is not a positive sensation for goldfish, given that they will become moodier and tend to act hostile toward tank mates in such cases.

On the other hand, the tank shouldn’t be too vacant. It’s safer to provide some hiding places for the fish so that the weaker ones always have a “sanctuary” when they feel attacked or pressed by aggressive tank mates.

Put A Separator Net Between The Fish

When it’s visible which fish are being the targets of the feud, we can proactively protect it by putting a separator net to divide the tank. So the weak one can stay in its own safe zone while the others have time to calm down and behave better. I find the method highly effective. It avoids fish loss the most. At the end, who likes saying goodbye to their gorgeous pet fish.

Make Sure That The Water Parameters Are Correct

Wrong water parameters stress fishes out and provoke them to do stupid and aggressive things that they shouldn’t do.

Video: Goldfish AGGRESSIVELY chasing Each Other

Why are my goldfish hitting each other?

If the tank is too small, goldfish can turn aggressive toward each other. Territorial behavior can be distinguished by the pursuit and nipping of other goldfish from a specific tank area. But, sometimes it’s hard to tell goldfish playing or fighting.

How do goldfish kill each other?

In general, goldfish don’t try to kill each other, but fights happen. Fish can get hurt during fights, leading to bacterial infections or other diseases. This disease can lead to the death of your fish if it isn’t treated as soon as possible.

What causes goldfish to be aggressive?

There are 5 main reasons why goldfish become or act aggressively against other tank members: territorial trait, sickness, competition between males for mating, dense population, and incompatibility between the species. The weaker goldfish will hide to preserve themselves from being harmed.