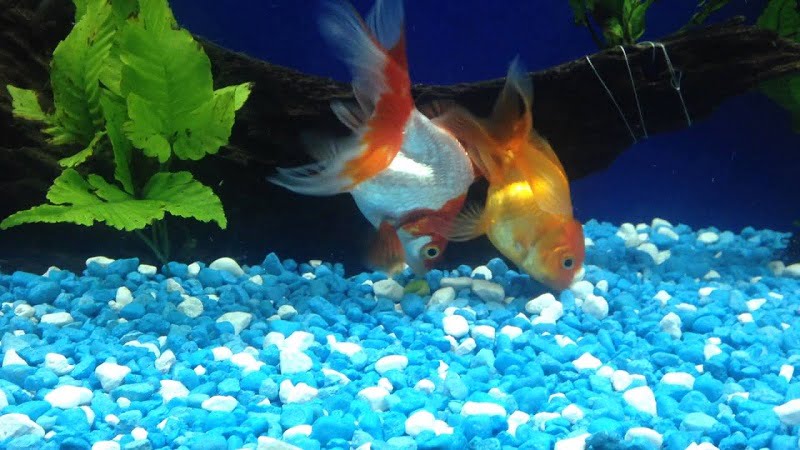 Although goldfish are often recognized for their peaceful and friendly nature, you can notice they sometimes fight aggressively with each other or attack other fish species.

You will be able to know when there is a goldfish fighting when one keeps chasing and nipping the others.

In reality, different goldfish types own different personalities, thus it may be normal for some goldfish to fight more often than others. But if the fighting happens too often, it might be a sign of stressed goldfish.

This article will point out 7 major causes for your goldfish fighting, so let’s find out together.

Why Are Goldfish Fighting Each Other?

Goldfish fighting usually comes from stress because when the goldfish are stressed out, they will easily get aggressive and attack others.

Here are 7 critical causes driving your goldfish to fight aggressively.

Though goldfish are ok with having friends, they need a large space to swim around and discover comfortably. When their tank gets crowded, their activity level is probably reduced, causing them to get stressed and end up fighting.

Goldfish prefer long and wide rectangular tanks to tall tanks because the long tank would provide them with more swimming space. On the other hand, the high tank type has more water pressure owing to the deeper water level. Consequently, their swim bladder and body will suffer more pressure, making them difficult to swim.

Moreover, a small tank size can make your goldfish become more territorial. Goldfish that show territorial behavior usually chase and nip others away from a certain area of the tank.

When being kept in a bowl or a vase, goldfish can become stressed out since these spaces are too narrow for them to thrive. This means they experience cramped conditions and feel restless. As a result, the goldfish will exhibit aggression towards their tank mates.

Fighting to compete for food is a common issue when you house your goldfish in a crowded tank.

However, even in the larger aquarium, you can notice your goldfish fighting as they are in competition for resources such as food.

Even if your tank is very spacious, goldfish will sometimes fight and bully each other if they are in competition for resources such as food.

Be aware of underfeeding your goldfish and this may make their fighting more intense. Add live plants to your goldfish tank to offer goldfish a supplementary source of food and to provide smaller fish with hiding places.

This can help minimize the probability of goldfish fighting driven by a lack of resources.

When goldfish are in the breeding season, they will naturally get aggressive. Male goldfish will fight with other males to attract the female.

When a sick goldfish is surrounded by other fish, it feels preyed upon and feels vulnerable. As a result, they may chase the fish away with jabbing motions of their bodies. It is their way of warding off predators.

Some goldfish may try to nudge the sick fish, and some have even rested alongside them to comfort them. This is typically the comforting side of goldfish, and should not be interpreted as aggression.

When you notice injured or sick goldfish, they need to be relocated to a quarantine tank right away. This is better for their safety and recovery, as well as to prevent infecting other fish.

Goldfish living in poor water conditions are easily stressed, which leads to aggression in the tank.

Besides, living in such poor water environments will significantly impact your fish’s disease resistance, causing them to be more vulnerable to sickness.

As a consequence, goldfish will fight each other to release stress or to protect themselves if they are weaker because of sickness.

For these reasons, it’s important to always check and keep the ideal water conditions in your goldfish aquarium.

Generally, goldfish cannot get along with other aggressive fish. So, when you put them together with aggressive species like the oscars or cichlids, there will be constant fighting in your tank.

Moreover, keeping goldfish with other fish that do not share the same living conditions will be problematic. The issue of aggression and fighting will consequently emerge.

Goldfish may chase another goldfish when startled by external sources. You can easily find this response in a newly introduced goldfish because it is not familiar with the new environment. As a result, the fish will show temporary aggression as well as notable stress problem.

Keeping small children and pets like cats and dogs away from the tank can help reduce the effects of being startled in your goldfish.

How To Prevent Goldfish From Fighting?

When goldfish have something to compete over, such as a food source or territory, they are much more likely to fight. You can prevent this by feeding your goldfish well and providing your tank with plants and other decorations to provide them with more hiding places.

Good water quality is also crucial to keep them healthy and avoid stress, which is one of the main causes of goldfish aggression.

You can read more about how to avoid goldfish fighting here.

Are my goldfish fighting or mating?

How do I care for my injured fighting fish?

You can heal your fish from an injury with various types of medication. A veterinarian can help you determine the best medication to use for treating goldfish or you can search the internet for information.
Here are three actions that you can take to simply assist your goldfish’s recovery from goldfish fighting.
1. Move the injured fish to a separate tank or hospital tank.
2. Provide that fish tank with Melafix.
Melafix is a product that kills bacteria, so it helps prevent bacteria from infecting your injured fish.
3. Ensure good water quality.

What are aggressive goldfish varieties?

There are some goldfish varieties that can be aggressive and dominant. Ryukin goldfish is one example.
Goldfish with vulnerabilities, like fantails or bubble-eyes, should not be kept with more aggressive varieties.

Your goldfish may be fighting for several reasons. In general, goldfish fighting occurs when they are in competition for food or swimming space. Also, poor water quality can stress fish and cause them to become aggressive.

I hope that the 7 causes for goldfish fighting demonstrated in this article will help you provide better care for your goldfish.