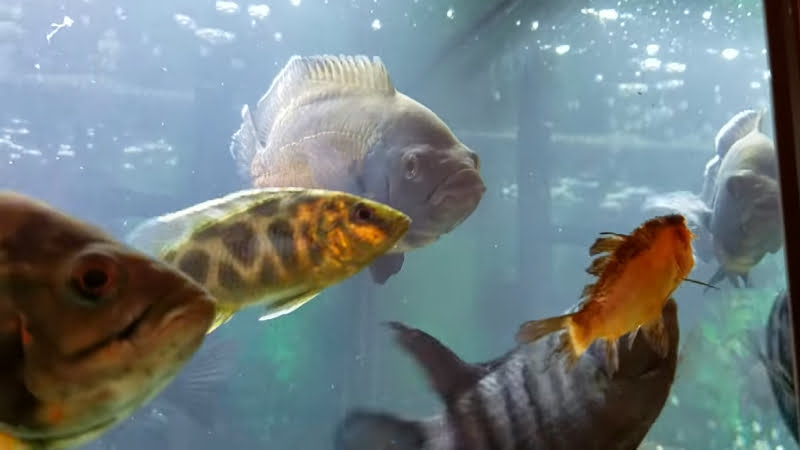 It is the goal of many fishkeepers to create a well-diversified and colorful tank of fish (unless they have a favorite breed they love to keep). There is a common misconception that all species of fish can live peacefully and happily together, yet that is not always true.

Breeds of fish will have a variety of needs, and not all fish species will make good tank mates for one another. Despite the fact that goldfish are one of the most popular fish kept by fishkeepers, this article will discuss whether or not they can coexist with the cichlid, which is another popular fish kept in aquariums. In addition, we’ll show you some things to consider if you want to keep Cichlids and Goldfish together.

Can Cichlids And Goldfish Live Together?

Let me first give you an overview before jumping into the specifics of whether or not these two fish can live together.

Goldfish and Cichlids generally can not coexist with each other under most circumstances. While goldfish are coldwater fish, cichlids are tropical water fish, which means they must be kept in warmer water than goldfish. There is a conflict between the temperaments of the two fish as well, with goldfish being passive and cichlids more aggressive, so they cannot live together peacefully in the same tank.

When I was doing my research for this article, I found a few owners who had successfully raised cichlids together with goldfish, including cichlids like angelfish and blood parrots. However, these are a few rare instances. It’s important to distinguish between barely surviving and thriving.

Check out below why cichlids and goldfish cannot live together.

5 Reasons Why Cichlids And Goldfish Can’t Live Together

I mentioned above that cichlids are adapted to warm water because they come from tropical regions. On the other hand, goldfish require cold water to survive. If they are exposed to warm water, it will unnaturally increase their metabolism and will pose a health risk for them.

Here’s where it gets tricky. 74 degrees and 76 degrees seem pretty close, right? Can there be a very slight chance that they might be able to thrive at a similar temperature – say 75 degrees?

Fish exposed to the extreme ends of the temperature range can prove to be fatal in the long run, even if they do not die immediately. It goes without saying that you should always aim to maintain the temperature within a middle region-not at either end of the scale.

You will severely reduce the life expectancy of your fish if you keep them at the incorrect water temperature.

A Giant Tank Is Required To Keep Cichlids And Goldfish Together

While this is not the case with every single specie of cichlid, most of the species that we keep as pets clock in at between 4 and 10 inches in length, with some species reaching up to 14 inches. Similarly, indoor aquarium goldfish can grow up to 6 inches in length. The fish can reach a size of 14 inches if they are raised in a pond. When keeping fish of this size, the tank requirements are larger than if you were keeping smaller fish such as bettas, tetras, or guppies.

The minimum tank size for one goldfish is 20 gallons. A tank size of 40+ gallons is recommended if you are raising two. Cichlids require a tank size of 30 gallons as the absolute minimum. Moreover, cichlids are highly territorial and require a lot of space. Hence, bigger is always better when it comes to a cichlid and goldfish aquarium.

For this reason, you will need a tank that is large enough to house both cichlids and goldfish. Having a small, cramped tank compromises a fish’s potential adult size and swimming abilities while increasing its bio-load and the potential health risks that come with it. However, a bigger tank would mean investing in more equipment as well as a lot of elbow grease in general. For some people, that might not be possible.

Cichlids And Goldfish Cannot Get Along

Goldfish are as gentle as they appear. As social animals, they love to live in groups and have even been known to interact with fish from other species and are known to be quite playful. These fish don’t claim territory, and they are relatively easy to raise in community tanks.

Cichlids, on the other hand, cannot be said to be the same. This is due to their notorious temper. These fish are aggressive and extremely territorial. In a cichlid tank, death due to bullying is a common problem.

It is obvious that your goldfish will suffer physically and mentally in a cichlid’s company. Cichlids also nip at goldfish’s long, flowing fins, which makes matters worse.

So, in summary, your goldfish is going to be very stressed. A sign that a goldfish is becoming stressed is their erratic swimming patterns, rubbing their bodies against rocks and gravel, and crashing to the bottom.

Furthermore, if your goldfish are small, they will definitely become the meal for your cichlids.

It Will Be A Challenge To Maintain The Tank Environment

There is no doubt that goldfish are the messiest fish in the hobby of fish keeping. The amount of bio-load that they produce in their tanks is truly unbelievable. In my opinion, the cichlids come in second place. Combined, they will wreak havoc in the tank.

Getting ammonia, nitrite, and nitrate accumulated in the tank sooner and more often can lead to a toxic buildup. Although goldfish are hardy and can tolerate some wrong parameters to a certain extent, cichlids do not cope well with unbalanced environments. Goldfish also release slime from their bodies that pollute the water very rapidly.

In essence, you will have to change the water more often than you would like. There will be very little room for error. I’m sure you already know that dirty water is an open invitation for a whole host of different diseases.

Goldfish are easily infected by parasites, bacterial infections, and fungal infections. There is a possibility that if goldfish are kept in an aquarium with cichlids, their infections might eventually spread across the entire aquarium.

Moreover, goldfish have a slime coat which will affect cichlids as well. There is a risk of infection between goldfish and cichlids, so it is best to keep them apart.

How To Keep Cichlids And Goldfish Together?

Even though keeping cichlids and goldfish together comes with many risks, many people still insist on keeping them together. I dug through forums and found that some experienced fishkeepers have had success in keeping these fish. The tank’s size, the fish’s temperament, and your experience are key factors.

You Will Need A Big Tank

You will need a large tank if you want to keep cichlids and goldfish together. It would be about 100 gallons or more. Additionally, you will need to add plenty of plants and decors that will serve as a hiding place for subdued goldfish, as well.

Goldfish aren’t territorial, but cichlids are. Their natural instinct is to carve territories and fiercely guard them.

Therefore, if you think you can handle the responsibilities of getting a bigger tank and everything that comes with it, you might wish to give it a try.

Check Out The Breed

Both types of fish have different breeds, and each of them has a different personality. It has been mentioned how Cichlids are mostly an aggressive breed, but there are a few exceptions to this rule. If you are able to find certain breeds of cichlid that are not aggressive, it will make it much easier to introduce them to a tank of goldfish since there will be much fewer chances of violence or bullying taking place.

Keyhole cichlids, german blue rams, blue acaras, and electric yellow labs are just some of the peaceful cichlids in the community tank.

You Must Be An Experienced Fishkeeping

The most important factor in keeping these two breeds together will be your experience with fish keeping. You will need to be able to manage your water temperature, and water quality through regular cleanups and water changes, as well as managing conflict or feeding issues, which will all be issues that you will have to deal with.

An experienced fishkeeper may not have an issue with this, but a hobbyist or beginner might find this challenging to manage. Keep in mind that these two fish are naturally not meant to be together, so making it work will not be straightforward.

Video: Cichlid Fish Vs Goldfish- Which One Is Suitable

Can angelfish live with goldfish?

Interestingly, I found a hobbyist who successfully raised goldfish and angelfish together, however, it might not be advisable to do so. It is due to the fact that angelfish are tropical fish that thrive in warmer water, while goldfish thrive in cold water.
I’m pretty sure that if you ever raise them both together, the angelfish will nip and attempt to eat the goldfish.

No, Blood parrot cichlids cannot be kept together with goldfish. It is true that a blood parrot will not be able to harm goldfish due to its deformed mouth, but it is still unwise to keep them together.
Moreover, they come from very different parts of the world, and they thrive in water that has very different parameters.
A hobbyist on the forum, however, did report having kept blood parrots and cichlids together. It has been reported that he set the water temperature on the warmer side and used extra filtration.

Can african cichlids live with goldfish?

Peaceful and social goldfish will have difficulty surviving in the company of aggressive African cichlids. In addition to the inevitable harassment and bullying the goldfish will suffer, these fish require different water parameters.

In spite of the fact that goldfish are peaceful fish that you would assume could live peacefully with most other species of fish, this is not always the case. When it comes to the compatibility of goldfish and cichlids, they should not keep them together in the same tank.

Having said that, an experienced fish keeper who has a large enough tank might be able to provide a home for these two varieties of fish to live together, but I wouldn’t recommend it for the vast majority of fish keepers.

You have very little chance of keeping them together and maintaining a happy, peaceful, and natural life for them both. Rather than force these two species to live together, it would be best to look for tank mates that are more compatible with one another.