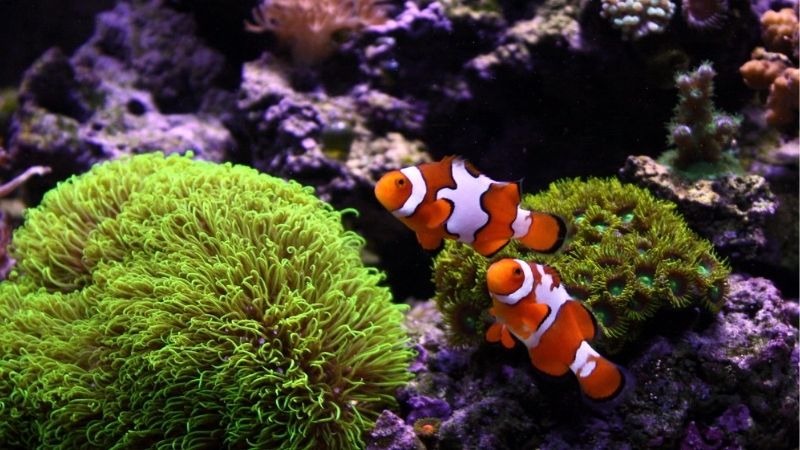 Caring Picasso Clownfish is a difficult process, but their striking colors and patterns make it worth the effort. This blog post will provide you with tips, tricks, and methods that can help you care this type of clownfish successfully.

What Is Picasso Clownfish? Are They Peaceful Or Aggressive?

WHAT IS PICASSO CLOWNFISH?

Clownfish are fish that are thought to have gotten their name from being able to look like clowns at a circus. They get the Picasso nickname because of the abstract coloring present on their bodies.

Picasso Clownfish are peaceful fish that is generally friendly and familiar with anyone around it. It can also be found in a Disney film, which may partially explain its popularity, as well as the bright colors of this fish.

Clownfish are a type of colorful marine fish with two major distinguishing features. First, they all start as males, and second, only one male living in any particular group will turn into a female. These females take on dominant roles over the lesser males within their grouping.

ARE THEY PEACEFUL OR AGGRESSIVE?

Picasso Clownfish are a peaceful species, with one exception. They may attack other fish and even your own hands when they have eggs or are in their anemone.

More often than not, Picasso’s Clownfish are very friendly and engaging. Not only will they follow you as you walk by their aquarium, but they will do it endearingly. Picassos don’t swim like other fish; rather they tend to waddle slowly making them look like a pet dog that is pleased and excited to greet you!

Clownfish, including the Picasso, are known to ‘chatter’ among themselves in their natural habitat. This is usually done to warn others of approaching predators and consists of five clicking sounds per minute. How they make these sounds is not yet known; however, Clownfish have also been known to produce these sounds while housed in an aquarium for human

Best kept in pairs due to their propensity to fight with larger groups, Picasso’s have a strict hierarchy where the female is definitely in charge. As previously stated all Clownfish are born male with one growing faster than the rest and metamorphosing into a female.

The male and female will bond by the male submitting. The pairing lasts for life, although should one die, the other accepts another mate. Should death occur on the female’s side, the remaining male becomes a female.

You will likely rarely compare your Picasso Clownfish to other species in its aquarium, as it has little or no interest in anything other than what is directly above their homes. It’s not a good swimmer and tends to stay on the top of the tank when possible, only swimming from one side of the tank to another.

Unlike much other fish, the Picasso has two dorsal fins. The first is a scalloped spiny dorsal fin and the second is a smooth soft dorsal fin. Picasso’s fins all have an appearance similar to that of a boat rudder with black edges

Picasso Clownfish- color and pattern-wise, these fish are much like other clownfishes. They sport a vibrant orange with the darkest black as well as white. What is different about them, though, is that their patterns aren’t the normal stripes or patches but rather unique designs not seen in other varieties of clownfish.

In the wild, Picasso Clownfish are graded on their markings and how prominently white coloring appears. They can range from grades of premium down to standard. Differentiating between market prices for these various grades of fish is important if you want to earn a profit auctioning your catch in the future.

The Picasso Clownfish is said to have a white stripe connecting the main body to the rear stripe. This connection provides a great deal of detail in how it should be painted, but does this make for an objectively high-quality fish? I’m not sure if any type of fish can be graded as A+ since one person may prefer less or more white.

If you’re trying to figure out if a Picasso Clownfish is male or female, it’s about as difficult as guessing whether the sky is blue. The dominant female is larger than her counterpart. Don’t be fooled by gender dynamics when you’re aquarium shopping though-the girls are just waiting for their turn to rule the roost!

As was previously mentioned, Clownfish are all born male with one turning female and becoming dominant. When this happens the female and the male will then bond within a few days. Please note that exceptions may occur and on rare occasions Clownfish never even accept each other as mates although no reason for this is known.

Once bonded, Picasso Clownfish will spawn as often as once a month and have no issues with spawning in an aquarium community. They are one of the easiest species to breed. It is much easier to spawn them separately in another tank because the eggs need to be removed shortly after they’re laid, and this is easier when controlled.

To breed a Picasso Clownfish, you will need a small aquarium and some type of container to put in the bottom with which the female can lay her eggs. Feed both parents every day for three days before moving them into this aquatic environment.

The Picasso Clownfish will produce up to 600 eggs per spawning, and those eggs should be placed in another tank with pristine water. The parents should only move the eggs without hesitation to prevent them from being out of the water for too long.

The period from depositing to hatching will be somewhere between six and eleven days, and it is most likely to happen in the dark. Interestingly, when bonded Picasso pairs lay eggs they hatch after the same number of days every time they spawn. You will need a bubbler running over the eggs now; make sure that you do not introduce any other fish or they may eat the eggs.

Once hatched, octopus urchins need to be placed in a home aquarium with at least two-thirds of the tank surface being dark and one-third light. Spurious grazers like rotifers should also be added for the baby octopuses to eat on as they grow.

For the next ten days, ensure that your clownfish is fed. Feed them dry food three days after they are introduced to fresh water and brine shrimp five days later. When dry food becomes a staple in their diet, stop feeding rotifers. Make sure to maintain their aquarium daily throughout this process.

After 10 days, larvae will metamorphose into Clownfish as long as they are strong and healthy enough to do so. Begin with a good feeding program around day ten and continue similar food maintenance up until the point of metamorphosis. Afterward, you must move them to a larger aquarium for continued growth.

Bear in mind that if you breed Clownfish, you are going to end up with lots and lots of babies. If you plan on selling them, buy some from a reputable store so that the babies will be Picasso’s!

Where Do Picasso Clownfish Come From?

Picasso Clownfish live in the Solomon Islands and Papua New Guinea but are still difficult to find since humans have destroyed 15-30% of the world’s reefs. Thankfully, breeders are helping this species survive by breeding them at home for commercial sale.

ORA is a fine example of Picasso Clownfish breeding which began in 2004 when they collected a male from the Solomon Islands. From there they bred that male with a female Onyx Clownfish and the breeding program was born. They have since added more wild-caught to their collection but their dream of producing thousands of Picasso specimens a year has not yet been achieved.

How To Care For A Picasso Clownfish?

Decor-wise, Picasso clownfish are reef compatible and do well in aquariums that are fish only, community, slightly aggressive, or have live rock. They also love anemones.

Picasso clownfish, particularly fond of the genus Heteractis and Stichodactyla anemones, can be difficult to pair together. The trick is to leave your Picasso to find it on its own. Even though this process takes time. Trying to force a pairing will stress out your Picasso’s too much and result in a shorter lifespan.

As always, it’s important to keep an eye on your Picasso and see how they’re reacting to the tank set up- especially if you’ve just introduced them into it. If there are issues that can’t be helped with water parameters or decors changes then remove the Picasso from its current environment as soon as possible.

When deciding on a Picasso Clownfish it is best to buy captive-bred specimens because their survival rates are higher and they’re easier to adjust to their new environment since they have already grown in size. The usual purchase size for Picassos aged approximately 7–8 months should be 3/4 – 1 ¼ inches. This age is when Picassos are usually captive-bred.

When acclimating a Picasso Clownfish it is best to use the drip method as this will ensure they do not go into shock. To do this, place the Picasso and its bag water into a clean bucket with a drip line dripping in tank water slowly over time.

After 30 minutes of soaking in copper water, you can net your Clownfish and place them in the waiting aquarium. Be sure to not pour bucket water into the aquarium as it contains unwanted substances.

Once in your aquarium, your Picasso Clownfish may go into hiding for a couple of days. This is normal behavior and nothing to worry about. Just keep an eye on them for any signs of distress and offer them food when they eventually do leave their hiding place.

Regular aquarium maintenance should be performed once a week that includes replacing 25% of the water and cleaning parts of the tank. Failing to do so may result in ich or fin rot which are almost always caused by bad water quality.

What is the rarest clownfish?

The Lightning Maroon Clownfish, originally from Papua New Guinea, is quickly becoming one of the more popular species of Clownfish for the aquarist.

How much Picasso clownfish?

WHAT ARE THE MOST EXPENSIVE CLOWNFISH?

A rare PeaceKeeper Maroon clownfish was recently auctioned for $8,900 on eBay. The fish is a biaculeatus species.

This article is about Picasso’s Clownfish and the way to breed Picasso clownfish. I hope you like it!