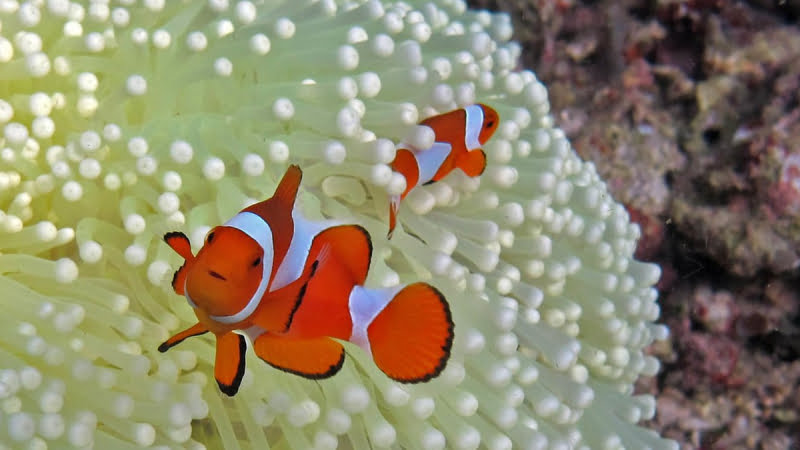 Clownfish eggs are what your favourite Disney movie is all about. You know, the one with Nemo and Dory? Clownfish are colourful fish that live in anemones and reproduce by laying eggs on a hard surface near their host anemones.

The clownfish larvae will then develop within these egg capsules until they hatch and swim away, hoping to find refuge in another anemone. Below we will discuss what do clownfish eggs look like and how you can spot them at home!

Clownfish eggs begin as tiny orange spots, but they soon develop. Soon, the eggs will start to lengthen and acquire visible eyes. A small fish may be seen in there right before hatching time. It’s fascinating!

The eggs are pinkish to orange at first, then grey, and lastly silvery when the eyes are visible. If a fry lives for approximately ten days, you’ve got a new clownfish.

By the third day, the clownfish eggs had changed from a luscious peach/orange to a drab grey. Then, sadly, the number of eggs decreased. I’ve seen this anecdotally in every clownfish breeding effort over the last two years. The degree of thinning appears to differ from egg clutch to egg clutch.

The eggs will be extremely silver on hatch day. This is due to the egg being nearly transparent, allowing you to see the clownfish larvae within plainly. If most of the eggs are silver and their eyes can be seen within the eggs, they will most likely hatch that evening.

How Old Do Clownfish Have To Be To Breed And Lay Eggs?

Clownfish can achieve sexual maturity between the ages of 1.5 and 2 years. I say “have the potential” because a few environmental factors will have an impact on this.

Clownfish are hermaphrodites, meaning they have both male and female parts. They begin their life as immature men. All of the fish in the group will remain adolescent males, with the exception of two. One fish will develop and begin breeding, while the other will change gender from male to female and begin producing.

If she dies, the breeding male transforms from a male to a female. The immature male is then ‘promoted’ to become the adult, reproducing male. As a result, I stated that they could develop at 1.5-2 years of age.

However, as seen by the preceding example, they may be considerably older and still immature, depending on the dynamics of the group. The good news is that hermaphrodism makes establishing a clownfish breeding pair quite simple.

How Many Eggs Will A Clownfish Lay?

In a single clutch or spawning episode, a clownfish will lay between 100 and 1,500 eggs. A typical pair yields between 400 and 500 (Wilkerson 2001). Please keep in mind that this is an Amazon affiliate link. The book is no longer in print but go ahead if you want to look at it on Amazon (or see if you can get it in a local fish store). Please keep in mind that I will get a tiny fee if you buy something from Amazon after following this link. (No pressure) The quantity of eggs laid by a clownfish at any particular moment is determined by:

Still, if you can read all of them, that’s a lot of clownfish babies!

Once you’ve got your breeding tank set up and the couple is in there, you’ll need to focus on two things. The first is the quality of the water, and the second is the diet.

It is typically recommended to reduce the salinity of your aquarium when producing clownfish. In most instances, a specific gravity of 1.020-1.022 should be enough. Furthermore, most aquarists swear by raising the temperature of the breeding tank to 83-84 °F. The water should be crystal clear, with minimal nitrate levels and no ammonia or nitrite.

Did you know that? You’ll almost certainly have to deal with algae and cyanobacteria eruptions in the breeding tank very shortly. It’s not the most beautiful thing, but it’s also not the most concerning! Just maintain one of the aquarium’s panels clean so you can see what’s going on.

Aside from water quality, you should pay attention to the couple’s nutrition. They should be in peak condition for effective spawning and rearing of the fry, and they should feel that it is sufficient food for any possible progeny.

Live fish meals are a fantastic alternative that your clownfish will love, especially during this time of year. Frozen meals and high-quality commercial foods also perform nicely.

It would help if you fed your pair 3-5 times each day, or as often as they will allow. Make careful to remove any uneaten items as soon as possible since they may quickly foul the aquarium water!

Did you know that? The spawning patterns of wild clownfish are determined by the lunar cycle. They usually spawn around the time of a full or new moon. This is the time of year when spring tides occur.

Where do clownfish lay their eggs?

Clownfish deposit their eggs in clusters on coral, rock, or near the sea anemone they live in.

Do clownfish eat their babies?

They will guard their eggs, but after the eggs hatch, the infants are left to fend for themselves. Other fish may devour the fry, they may be washed away, or they may even be eaten by their own parents!

How long do clownfish live for?

It has been proven that a fortunate clownfish in the wild may survive for 6 to 10 years.

I hope my article has provided you with exciting information about clown caviar and what do clownfish eggs look like. I hope you have a clownfish tank of your own soon.