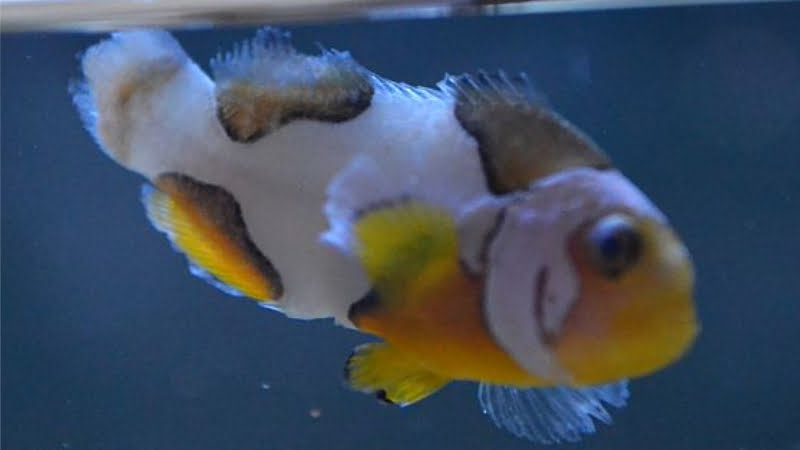 The clownfish is a popular saltwater fish that has been in the aquarium hobby for many years. They are commonly found in home aquariums, and they make great starter fish for aspiring marine aquarists. Unfortunately, clownfish fin rot can sometimes be a problem that affects some clownfish kept in captivity.

This article will discuss what clownfish fin rot is, why it occurs, how to prevent it from happening again, and more!

Clownfish, also known as anemonefish, are bright orange and blackfish popularized by the Disney film “Finding Nemo.” Clownfish are most often live in warmer water, such as the Indian Ocean. They can grow up to 6.5 inches long, but the smallest clownfish is only about 2.5 inches long.

Clownfish are not difficult to care for and will eat just about anything, making them a good choice for beginner fish owners. However, certain diseases like rot make these little guys quite unstable if left untreated.

It’s hard to find a single cause or cure for fin rot because the specific problem is often caused by different things. Understanding this problem, in this blog, I will help you better diagnose it and choose the best treatment.

Things You Need To Know About Clownfish Fin Root

One of the most common issues with clownfish is rot, both as a disease and a symptom. Though it usually affects them in their natural environment, it happens to fish in aquariums at home more usual.

One of the most obvious symptoms is that the fins will start to deteriorate, which makes them look threadbare. Another symptom is white spots on fins, just like those on a rotten banana.

Symptoms of clownfish fin rot are most apparent in the early stages. In the early stages, you might notice a subtle white or semi-transparent edging on the fins. Basing on how your fish looks, this white edging may be hard to see against its natural color.

A white, globular protrusion will form at the bottom of the fin and gradually spread up the length. The edging may take on a more sinister color as it progresses.

As the disease progresses, the fish’s fins become ragged and uneven, with large chunks of flesh simply sloughing off, shortening their tail dramatically.

If fin rot goes unchecked for too long, the infection will start on the body and spread up from there. Clownfish fins are subject to damage by physical trauma and nutritional deficiencies.

Besides those physical symptoms, fish with tail rot may exhibit behavior changes. The infection is dangerous for the fish because it places a lot of strain on their body, making them slower and weaker than normal. Clownfish with fin rot usually avoid other fish and spend most of their time on the bottom of the tank. They also lose their appetite and stop eating.

One cause of fin rot is poor water quality. When toxic nitrites and ammonia levels are always high in the water, fish will develop fin rot. This gradually sours the water, which allows pH levels to increase and bacteria to flourish over time.

Bacteria can thrive in bad water quality, causing fin rot. The most common types of these bacteria are Aeromonas, Pseudomonas, and Vibrio, all three of which are gram-negative.

In addition to bad water quality, stress also plays a big role in fin rot. Stress and poor water go hand-in-hand: Fish will become increasingly stressed out the worse your aquariums get while fin rot is often caused. In fact, many animals are prone to the condition when they experience prolonged periods of high stress or interrupted sleep.

Fish in overcrowded tanks or environments are often susceptible to fin rot, with excessive handling and frequent moves putting them at risk. Fish tank temperatures that are too low can also lead to fin rot.

Eventually, fish can contract fin rot after experiencing physical harm. Fin-nipping is a common annoyance for aquarium owners, but if your tank is too small and vulnerable fish are being outnumbered, then it can quickly turn into a serious problem. Fins become damaged by fin-nipping, which in turn leads to infection and more physical damage.

Some fish diseases are caused by bacteria that live on and under the water’s surface. This slippery type of bacteria is hard to kill with medication because it doesn’t show up in the aquarium. Other fish will take in this disease after contact, for example, if they touch the aquatic floor or eat any food next to an infected animal.

The high levels of ammonia and nitrate in the tank don’t help matters either. These pollutants of aquarium water can hamper your efforts at maintaining healthy conditions for your fish with their own set of problems. The closed nature of an aquarium means that bacteria will spread fast; a quarantine area is, therefore, essential to keep any contagion from.

How To Realize Rot On Clownfish’s Fin?

Different types of fish rot affect the flesh and fins in a different way. For example, if their fin is rotting unevenly on one side, it may be a result of fungi infection. If this is the case, there will usually be flared tissue around this area that could have turned white at some point.

If it is rotting unevenly and appears jagged, the cause of the rot could be a bacterial infection. Take extra precautions to catch the rot early because once it reaches the base of the fin, your fish might not be able to regrow material that they have lost.

If unsure of these signs are present, you may look for below cases of fin rot in your aquarium:

Some other potential causes of markings or damage to the fins of a clownfish are parasites, flukes, and ich. Fish can also get into fights with one another, which is why it’s important to keep your fish well-fed and be prepared for some competition among them.

Clownfish fin rot remedies are complicated and difficult to identify. Finding the root cause of your clownfish fin rot can be challenging, which is why you need to assess each area separately before deciding on a course of action. If this is not the problem, then you can search for other causes.

Some ways to fix the rot in your home aquarium :

If bacterial infections are the root cause of fish fin rot, and these can be easily alleviated by antibiotics. Make sure to take the necessary steps to care for your tank and keep bacteria from washing back into it.

Once clownfish fin rot sets in, it can quickly progress to the point that your fish will need an amputation. Spotted early enough will help you be able to salvage your fish’s fins.

Advice To Prevent Clownfish’s Fin From Being Rot

The best preventative measure is to keep good tank conditions. Choose a fish that can live in water at any temperature and ensure the tank is kept clean. This will help improve the health of your fish and avoid rot from setting in.

Feeding larger portions of food on a daily basis can lead to an accumulation of uneaten food that may contribute to fin rot. So, be sure that your fish are fed with smaller eating portions.

The good news is that fin rot isn’t very common. Over time, your clownfish may lose pieces of its fins because of a bigger fish in your tank. Be sure to watch the fish carefully; you could need to separate them so they can live more peacefully.

Clownfish are sometimes affected by rot, which happens when they’re not taken care of properly. However, it’s also possible to buy livings with rot already in progress at the store; these fish will have been kept in unfavorable conditions beforehand.

If you observe a fish with fin rot, it is important to act fast. The longer the animal stays in stressed conditions, the more likely it will receive additional injures or die from other causes. Make sure that you are giving your new clownfish the best chance possible at recovery by following the checklist above.

What should clownfish owners do to prevent fin rot from coming back?

There are several steps you can take to avoid dirty water that will help fend off potential bacterial infections. One of the easiest things you can do is schedule a regular time for cleaning your aquarium and make sure not to leave it too long between taking care of maintenance duties. You should also try to reduce the amount of waste in your tank by only putting live plants.
As noted before, try to reduce any stresses in the aquarium by maintaining a stable temperature with a heater and adjust the current. Once per day after feeding your fish, examine them closely for symptoms of fin rot.

What is the best way to prevent rot for clownfish?

Finding the right fish tank maintenance routine is a helpful method to stop fin rot. This means keeping your water temperature at a constant level and providing high-quality chlorine levels in addition to decluttering and scrubbing your tank regularly so that the surfaces are freed of algae buildup.

What are the normal methods to cure fin rot?

Aquarists should be early aware of the seriousness of fin rot. If it is left unchecked, it will wreak havoc on tanks. Almost people only start learning about fin rot after they notice the effects in their aquarium rather than before. So, my article task is to change that.

The most dangerous thing about a fish tank is not knowing what kinds of things can go wrong. This guide covers all the different types of fin rot with the prevention, diagnosis, and treatment methods for those who are experiencing it for the first time. Wish you find my blog helpful, and many thanks for reading.