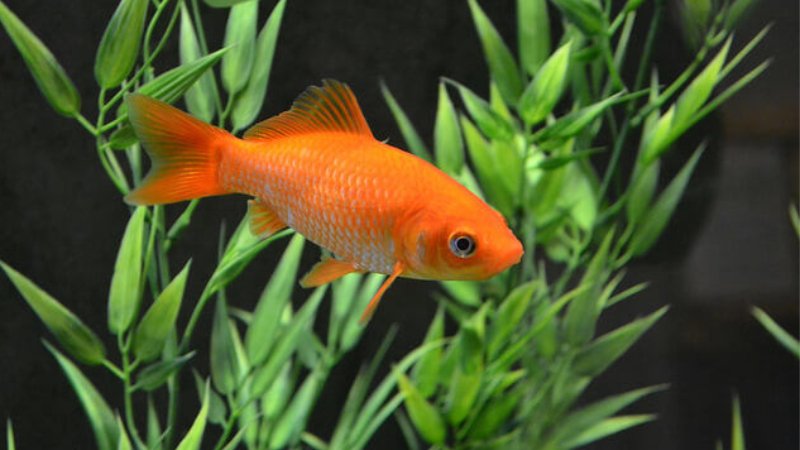 The goldfish is a type of freshwater fish belonging to the Cyprinidae family, also known as the carp family. Despite being the smallest member of this family, it is famous for its colorful and attractive appearance. Since goldfish do not possess mouth barbels, they differ slightly from most fish in the carp family.

It’s likely that you’ve seen two or more goldfish interacting with one another in an aquarium. Indeed, it is a breathtaking sight to witness. This, on the other hand, could lead you to believe that goldfish are social species. But is that really so? Could they get sad if you left them alone in their tank for an extended period of time? Can goldfish live alone? Is it necessary for them to work in pairs? Let’s have a look and see.

Yes, that is the short answer.

Goldfish are not part of shoaling groups; therefore, they don’t require living with other goldfish to feel safe and happy. Although they may live with other goldfish in the wild, they are not dependent on others for protection or food. As a matter of fact, goldfish rely exclusively on other goldfish for reproduction. There is no support from the parents once spawning has occurred, so the fry are completely alone from the moment they are born, and they will remain alone for the rest of their lives.

While we can never be certain, there is no evidence to suggest that goldfish are depressed or lonely. When you observe a solitary goldfish that seems sluggish or unhappy, it is much more probable that there is an issue with its surroundings or health than that the goldfish is lonely. Disease, parasites, and improper water conditions may all cause signs such as clamped fins, lethargy, and overall depression in aquatic life.

If Goldfish live alone, will they get bored?

Because fish are unable to communicate verbally, there is no scientific data to determine if goldfish get bored. Nevertheless, just as it seems that they do not get lonely, it is also certain that they do not become bored as well.

It has now been demonstrated that the 3-second memory span of the golden fish is a complete fabrication. A goldfish can remember a lot more than just 3 seconds. In fact, they may remember things for months at a time.

As a fish, they have a good memory, but this isn’t always a sign that they are bored. The truth is that goldfish probably don’t have a problem with boredom!

It’s true that fish might be unhappy if they aren’t fed correctly or are kept in a barren tank that doesn’t accurately represent their natural habitat.

No scientific evidence exists to support the idea that fish may be depressed. However, it is believed that fish may experience feelings of sadness, although we are not sure whether we would go so far as to term it depression in this case.

If a fish isn’t moving around much, isn’t eating well, or is sleeping a lot, it may be depressed, much as depression may appear in human beings. This means that depression in fish is not caused by boredom or loneliness but by a lack of care and a terrible habitat.

How to Tell If Your Goldfish Is Lonely

Goldfish’s health is strongly affected by their loneliness and boredom. Despite the fact that goldfish seldom get lonely, it has a negative impact on their health when they do. That’s why it’s imperative that you keep an eye out for your goldfish so that they don’t become lonely.

You can determine whether your goldfish is lonely or bored in a number of ways. When your fish feels lonely, it will exhibit certain behaviors. And you can monitor the health of your goldfish by looking for the following indications:

Do Goldfish Happy When Having A Friend?

Goldfish, despite their lack of shoaling behavior, are social species. This makes them excellent additions to certain community tanks, particularly those with goldfish. Goldfish, on the other hand, will consume nearly everything that fits in their mouths. Therefore, they are not a good choice for aquariums with smaller fish and invertebrates, such as tetras and dwarf shrimp.

Because goldfish are sociable fish, many of them will gladly coexist with other fish, even if doing so is not required for their health or enjoyment. As long as your goldfish don’t have any history of bullying or fin-nipping, you should find them a tankmate. In the absence of an additional tank mate, your goldfish will not be able to differentiate between the two cases. Even though goldfish are more intellectual than they are frequently given credit for, they are unable to grasp the meaning of loneliness in its many forms.

If your goldfish had a long-term tank mate that just died away, they might show signs of melancholy or mourning. In this case, a new tank mate might be of use in helping your goldfish feel more normal and settled within their environment.

Video: Goldfish – Can Goldfish Live Alone? – Can goldfish get depressed?

A goldfish usually swims and forages for food in a group when in the wild. Inside an aquarium, you’ll usually see them swimming in the same direction. It proves goldfish are social fish species. Actually, goldfish tend to exhibit both shoaling and schooling behavior. In this way, they can keep their local groups together and protect themselves from predators in the wild.
Moreover, goldfish are known for their ability to mimic the behavior of other species of fish. For instance, observing one goldfish swimming along close to the aquarium glass might motivate others to do the same. As you can see, goldfish seem to be social creatures that have strong social learning abilities.

Is it possible to keep goldfish alone in a bowl?

The answer is “yes”. You can keep your goldfish alone in a bowl. Nevertheless, the goldfish’s lifespan will probably be shortened if you keep it in a bowl. Goldfish tend to produce a large amount of waste. Therefore, the water will be polluted quickly if you keep them in a small bowl. In other words, keeping your goldfish in a large, filter-equipped aquarium is always a good idea.

Should you get a tank companion for your goldfish?

Having a tankmate for your goldfish isn’t a necessary, but it’s likely to make them happier. They’ll have a lot more to keep them busy, and it’s less likely that any of them will grow bored.

How can you entertain your goldfish?

In most cases, goldfish will have fun with plants and small items in their tanks. Therefore, you can entertain your goldfish with decorations and other items in the tank. In addition to providing decorations, you can simply interact with them through simple hand gestures.