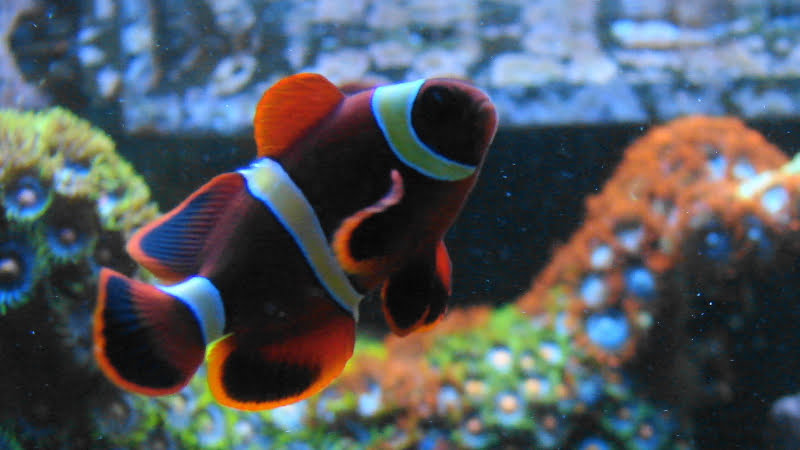 Maroon clownfish are members of the genus Premnas and as a result, they are different from all other clownfish species, which belong to the genus Amphiprion. There is no doubt that the Maroon Clownfish is one of the most popular and iconic reef tank fishes in the world today. In addition to their excellent maroon pink coloration, their three white or gold stripes make them one of the top 20 species of saltwater fish in the world.

In this article ,we’ll find out some information on this yellow maroon clownfish species such as native habitat, how to care, feeding, and so on.

There are many types of clownfish in the aquarium hobby, but the yellow stripe maroon clownfish is one of the most attractive ones. It is also known as the spine-cheeked anemonefish or the maroon anemonefish. These species have a wide distribution in the Western Pacific Ocean and the Indian Ocean: Indo-Australian Dome. including India, Burma, Malaysia, Thailand, Philippines, Indonesia, New Guinea, New Britain, Solomon Is., Vanuatu and Australia.

In the hobby, many species are captive bred because it is such a hardy species with good adaptations to aquarium life. There is an aggressive nature to Yellowstripe Maroon Clownfish, especially towards other clownfish of similar size or similar sized fish. Because of that aggressiveness, Maroon Clowns are suitable for fish-only communities, more aggressive fish and some reef aquariums.

Yellow Maroon Clownfish generally have a maroon coloration, but the coloration can vary from maroon to red, and sometimes even an orange-red coloration. A head-stripe, a middle stripe, and a tail-fin stripe are 3 relatively wide stripes on their bodies. They are also known as Spine-cheek Clownfish because of the spines emanating from both cheeks.

At the time of their early juvenile stage, Gold Stripe Maroon Clownfish’s stripes are white. The white color will change into yellow when they are about 12 months old. When the fish are adults, the larger female will often turn a darker red color, while the smaller male will often retain its orange coloring. The Gold Stripe Maroon Clownfish, a species which can reach a size of 6 inches, is the largest clownfish species.

I will show you how to successfully keep Yellowstripe Maroon Clownfish in the home aquarium.

The Maroon Clownfish is the largest known species of clownfish and typically reaches around six inches in length. If you have an aquarium with a minimum capacity of 30 gallons, you can comfortably accommodate them. Because they are native to tropical coral reefs, live rock or other aquascaping will be required to provide them with adequate caves and crevices to retreat to when threatened.

This species of clownfish is more aggressive than most other clownfish species, which is why it is not recommended to keep more than one clownfish or similarly sized fish  in the same aquarium, unless in a particularly large one.

As a mated pair or as a single specimen, this species will do well in either a community aquarium, an aggressive aquarium or a reef aquarium. Yellowstripe Maroon Clownfish enjoy symbiotic relationships with anemones. The anemones, however, do not require host anemones to survive and thrive. However, in most cases, they will be glad to accept them if they are offered to them.

Our recommendation for Maroon Clownfish is the popular and hardy Bubble Tip Anemone. An anemone such as the Bubble Tip Anemone, while not necessary, can provide the Yellow Maroon Clown with a more natural environment. When moving fish of this species, it is important not to net them as the cheek spines can become tangled in the netting and cause damage to the fish.

How to feed and provide proper nutrition for Yellowstripe Maroon Clownfish?

The Maroon Clownfish eat a lot. Clownfishes are omnivorous feeders, which means that they will be able to consume a variety of different types of food. Clownfish in nature consume crustaceans, algae, polychaete worms, and leftovers of anemones’ meals, as well as crustacean pods (such as copepods and amphipods).

What fish are compatible with Maroon clownfish?

Maroon clownfish are better suited to bold tank mates as they are quite aggressive in themselves, such as angelfish, gorillas, and orcas. Small peaceful fish (including other clownfish) will be harassed by them.

Although the Maroon Clownfish are more expensive than much other fish, they are worth your money. They are a great addition to your aquarium. They also have a wide variety of colors to choose from. And here I introduced you to the yellow maroon clownfish that is easy to breed and also nice to keep in the tank.