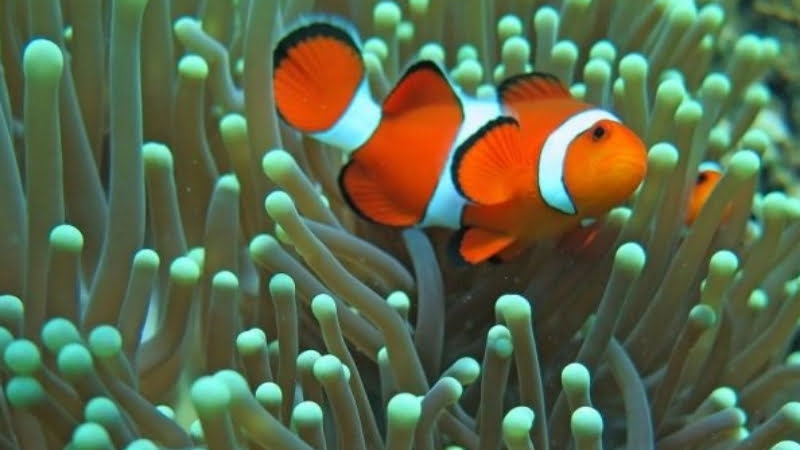 Almost everyone has heard of a clownfish. They’re the ones who live in anemones and always seem to have big smiles on their faces. Clownfish, which are part of the order Perciformes (the perch-like fishes), can be found in all the world’s oceans except for the Arctic and Antarctic.

But why do clownfish have stripes? This blog post will answer that question and more! These fish are often brightly coloured with two broad diagonal white stripes on each side of their body that extends from just below its mouth to near its tail fin.

Despite the popularity and widespread distribution of coral fishes, scientists still do not understand why they have such a diverse range of colour patterns. More specifically, how are the patterns produced, and what functions do the colours play? To find answers, a research team from the Banyuls-Sur-Mer Observatory in France and the University of Liège in Belgium chose to investigate clownfish and its relatives. The findings were published in the journal BMC Biology in September 2018.

Nemo, also known as Amphiprion Ocellaris, is a clownfish, one of around 30 kinds. Their color pattern is distinguished by yellow, orange, brown, or black with vertical white stripes made up of light-reflecting cells known as iridophores.

Clownfish species are identified by the number of vertical white stripes in addition to other morphological features. As a result, some species have no stripes (Amphiprion ephippium), one (Amphiprion frenatus), or two (Amphiprion Sebae). The renowned Nemo, Amphiprion Ocellaris, has three stripes. What can account for the discrepancy in the number of bands between these two species?

To better understand the process underlying the variety of pigment patterns, we classified each clownfish species based on the number of vertical bands. A genetic examination of clownfish evolution found that their common ancestor had three white bands and that during their diversification, clownfish lines lost the tail band, then the body band, and lastly the headband, yielding four potential combinations:

Looking at the patterns that have evolved, it is obvious that diversity is limited: while the four combinations described above are observed, biological mechanisms do not enable a species to have others, such as a single stripe on the tail.

And Away They Go Over The Course Of Evolution

We studied the development of two species with two distinct coloured patterns in maturity, A. Ocellaris, which has three stripes, and A. Frenatus, which has just one stripe on its head, to understand why some stripe combinations do not occur in clownfish.

During its metamorphosis from larva to young adult, A. Ocellaris’ stripes appear in a certain order — first on the head, then on the body, and finally on the tail. That is, in the reverse sequence in which they vanished for certain species during the evolutionary process.

A second surprising finding was that A. Frenatus develops similarly to A. Ocellaris in the larval stage, with three white bands appearing sequentially from head to tail, but adult animals only have one. These bands are then lost in a reverse sequence of evolution, from tail to head.

These findings imply that the order of emergence of the bands during development limited the chronological loss of the bands during evolution and that there is a significant connection between phylogenesis (evolutionary history) and ontogenesis (individual development). This leads to the notion that band development is governed by a specific genetic process and is determined by the fish’s anteroposterior polarity. These processes are yet unknown.

What Are The Stripes For?

To answer this question, we compared the diversity of white-stripe patterns seen in wild clownfish communities to that found in communities where the diversity of white stripe patterns would be dispersed totally at random. We were able to demonstrate that having clownfish species with the same number of bands in the same location was extremely unlikely using our simulations.

Several biological variables can impact this non-random distribution, and the number of white bands is believed to help clownfish species to distinguish one another. This identification is critical in the social organization of these fish, which live in anemones with several species coexisting. And it is because of this awareness that Nemo and his father are able to locate one other at the other end of the ocean – a joyful ending for everybody.

How Do Clownfish Earn Their Stripes?

Clownfish’s unique white stripes develop at varying speeds based on its sea anemone hosts. Clownfish are easily identified by their white stripes that emerge as they progress from larvae to adults. However, how these unique patterns arise has long been a mystery. According to a new study, the pace at which these white bars develop is determined by the kind of sea anemone in which the clownfish lives. The researchers also revealed that thyroid hormones, which are important in metamorphosis, influence how soon their stripes develop.

Why do clownfish have white stripes?

They focused on thyroid hormones, which are known to trigger metamorphosis in frogs.

How do clownfish stripes help them survive?

According to a recent study from The University of Western Australia, the colorful stripes of coral reef clownfish may function to alert predators about their toxic anemone hosts.

Dory is a Paracanthurus Hepatus, or Pacific blue tang fish, sometimes known as a royal blue tang or hippo tang.

The white stripes on the charismatic clownfish, the coral reef fish made famous by the film Finding Nemo, make them easily identifiable. These stripes, known as bars by biologists, occur as clownfish age from larvae to adults in a process known as metamorphosis, but how these unique patterns form has long been a mystery. Hopefully with this information will give you the answer to why do clownfish have stripes?