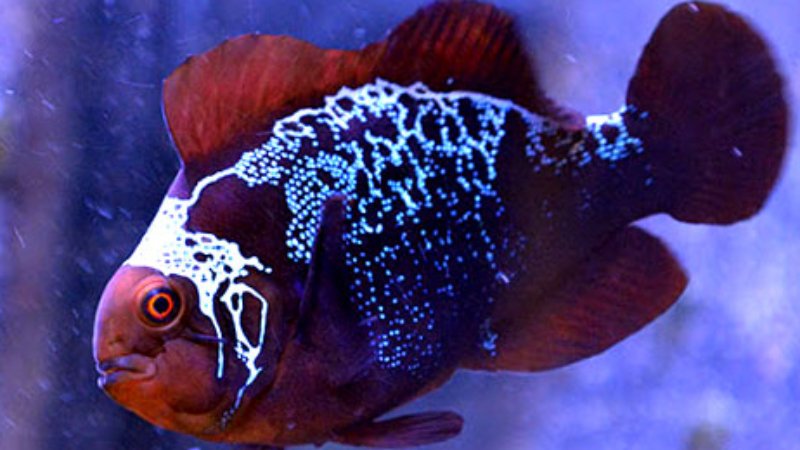 The Maroon Clownfish is a beautiful species of fish, but they are also known to be aggressive. They will often fight with one another for territory and resources.

This blog post talks about how you can avoid maroon clownfish aggressive problems by regulating the number of Maroon Clownfish in your tank, as well as what to do if fighting has already started.

Even though the maroon clownfish is a popular species to keep in saltwater aquariums, it can also be aggressive. These fish rank consistently among this list of top 20 species and are known to bite hands!

Maroon clownfish can be kept in a reef setting or a fish-only setting, but they are quite territorial and aggressive. They will fight even when attempting to form a male and female pair! Just putting two juveniles together may result in death as it doesn’t always work out and unlike other species of the clown.

An aquarist’s success in keeping a large female and small male maroon clownfish will depend on the dominance level of the dominant female. A staff member should also consider segregating too aggressive males who are not accepted and creating areas for them to try to find sanctuary since they cannot hide from the more aggressive females.

Some aquarists who keep clownfish in an aquarium find that the female will get aggressive with the male. To help prevent this from happening, they’ll place a half-inch egg crate divider between their anemones to give each fish its own space.

Maroon clownfish can be aggressive. They have spines in their cheeks that let them chase other fish from the area they claim territory in, which is the entire tank. Female maroon clownfish can grow significantly larger than males and will chase the male until he can find a hiding spot.

Clownfish have a reputation for being both clever and aggressive. They will defend their nests from any would-be intruders – including you, the owner of the aquarium.

Clownfish Get Along With Others

The Maroon Clownfish is aggressive to other types of clownfish and can produce audible chirps and pops that divers or aquarists may hear. They may also be heard producing a pop followed by a chirp, which could indicate two different conversations. One message might say “get out” while another declares “get in line.”

The Maroon Clownfish exhibits aggressive behavior to other members of their species by chasing and chirping. If the aggressor clown is an adult female, it will upwards quiver as it continues to pursue a subordinate clownfish. The subordinate then shakes its body or head in response to the jaw popping by the aggressive fish.

The Best Way To Reduce The Aggressiveness Of Maroon Clownfish

Now that saltwater fish are so pretty (unique and amazing), it’s hard to resist getting one for your tank, especially since they’re not the only species with an aggressive streak. You already know what the primary reasons for aggression are. How do you deal with this situation?

Can I put 2 maroon clownfish into a tank?

Maroon clownfish are easy to care for, but they can be aggressive. They make a good beginner fish but may only have one or two tank mates because of their aggression level. If your female is moody and aggressive while the male is timid and shy the pair of them will never get along well.
The best way to ensure a male and female pair will stay together is by providing the properly sized tank. To do this, read more about social behaviors below before pairing them up with anemones. It’s also important when keeping anemones for clownfish to provide the necessary lighting as well as the size of the tank for each specific anemone.
Maroon Clownfish are hardy and easy to keep in a freshwater environment if water parameters are adequate. These fish make for an excellent beginner aquarium specimen; however, they can be aggressive, which will limit your selection of other schoolmates. It is important to note that if you own a pair of maroon clownfish, the female might get moody.
Keep the anemone in a tank that accommodates its size and lighting requirements. The clownfish will get extra protection from predators in the anemone, so you can add more fish to your tank without them immediately being targeted by the other inhabitants.

What are the recommended methods to avoid maroon clownfish aggression?

The best place to start is by not adding predatory fish early on, as these have a tendency to intimidate and attack more timid species.
Avoid adding fish with similar body shapes or coloration. For example, avoid housing powder blue, powder brown, or gold rim tangs together — this is a recipe for disaster. Even if the fish are from different families, such as a royal gramma and bicolor dotty back will have issues. When you add new fish, make sure to put them in the tank together. This should help to avoid establishing territory too quickly and those characteristic fights between different species of territorial fishes.
Be sure to provide your fish with enough space. If it is well over the minimum tank size requirement, you reduce the drive for aggression. There are other ways you can help with this, such as adding the largest fish last, providing plenty of hiding spaces, and adding your new fish at night so it has time to settle in before meeting new tank mates.

Should I keep a maroon clownfish with other fishes in a 30-gallon aquarium?

Do not keep a maroon clownfish with any other fish within a 30-gallon tank. Maroon clownfish are territorial and aggressive, and they may compete over food, space, or refuge. Larger tanks offer the opportunity to house predatory fishes that outcompete this species for food or territory.

When clownfish aggression problems happen, you can do nothing to solve them. However, it is essential to plan how to respond and show dominance when there’s an aggressive incident. Decide the order for the fish in your tanks and keep compatible species. If you realize that certain fish are known for their aggressiveness, use caution, or they will become harmful towards other tank mates.

Therefore, once you are interested in adding a maroon clownfish to your aquarium, go for my blog, and I recommend you try the above methods to help your aggressive fish calm down. Thanks for reading and hope my blog will help you!