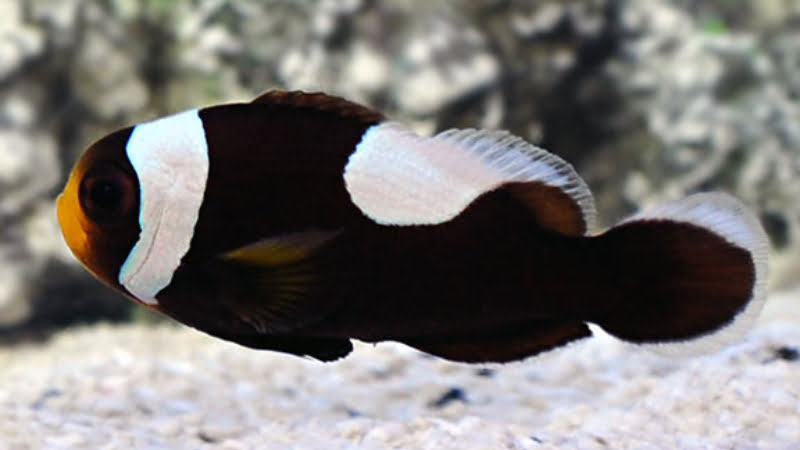 You often see cute orange clown fish, right? Have you ever thought about brown clownfish? If you haven’t heard of it, this could be an interesting discovery. There is a type of brown clownfish that is Brown Saddle Clownfish

The captive-bred SA Saddleback Clownfish (Amphriprion polymnus), a species which is considered one of the more delicate species of clownfish, is still a very interesting and unique addition to any tank

In this article, I will introduce you some interesting information about the brown clownfish: distribution, description, behaviours, diet, and so on.

Brown Clownfish or Brown Saddleback Clownfish a member of small group of three anemonefish known as the “Saddleback Complex” that has scientific name is Amphiprion polymnus. Depending on where they are found and the anemone they inhabit, different color varieties exist. Overall, their color can range from yellowish orange, black, or a light brown shade, and they will have a tailfin which is white-edged. The pectoral fins and the nose can also differ in colors, and may be orange, white, or brown. Nevertheless, all the color variations have a wide white headband and a wide white middle band that looks as if it forms a saddle shape.

Located from Malaysia through the Solomon Islands, then northwards to the Ryukus and then southwards to Australia, Western Pacific.

They can be hosted by the Haddon’s Carpet Anemone Stichodactyla haddoni, sometimes by the Leathery or Sebae Anemone Heteractis crispa, and on rare occasion by the Long Tentacle Anemone Macrodactyla doreensis.

The Saddleback Complex is relatively rare and may not be as well suited for captivity as the other species. Acclimating them to captivity usually takes about three months, and after that they begin to begin to exhibit less panic. It is believed that they do reasonably well once acclimated to captivity, and some have even spawned in captivity.

In this clownfish, the body is light brown to dark brown with an orange face. Their body shape is much sleeker and more oval in shape, similar to both the Sebae and Latezonatus clown fish. As can be seen from this picture, the saddle starts behind the dorsal fin of the fish, and curves forwards and down across the body of the fish, usually ending only part way down. In addition, the tailfins, which are usually dark, are typically accompanied by white edges around.

Saddleback clownfish are considered semi-aggressive, but are among the most peaceful of clownfish. Saddlebacks are generally peaceful members of the tank, and they will not bother their tankmates. It is believed that these clownfish are more tolerant of other clownfish in the wild, due to the fact that they live in groups. They can be kept in the same aquarium with most peaceful, non aggressive fish, with the exception of those that are large enough to swallow them.

This species of clownfish is omnivorous, like other clownfish, and therefore should be fed as such. A few of the excellent choices are meaty, enriched foods, such as mysis shrimps, spirulina brine shrimps, and chopped table shrimps, as well as herbivore preparations. You should also feed the fish flakes and pellets with Spirulina added if there are not enough algae for them to feed on in the tank.

You should feed adults twice a day, and juveniles three to four times a day, whatever they will consume within three minutes.

As one of the largest clownfish varieties, it is recommended that this fish be kept in a tank no less than 30 gallons in which there is plenty of room for the fish to hide and swim. Small groups are preferred, and anemones like Haddon’s Sea Anemone Stichodactyla haddoni, which is a host anemone, will make an aquarium more successful. Aging increases its aggression towards conspecifics.

Tanks that are well maintained and provide accessible water are beneficial to them. If the water quality is poor for an extended period of time, they will become ill and also contract diseases.

How to distinguish the sex of Brown clownfish?

Are Brown clownfish easy to Keep?

I cannot say that keeping this fish is easy, but it is not impossible either. As a less durable species of clownfish, saddleback clownfish are recommended to intermediate to advanced aquarists. Generally, they have a hard time adapting to their new surroundings, and have been known to run into the glass or jump out of the tank if they are feeling threatened. However, once they get used to captivity, they tend to do well. The process of becoming accustomed to captivity can take three months.

Can Saddleback be kept with Percula Clownfish?

The Saddleback can be kept with other mellow clownfish such as the True Percula Clownfish. In this aquarium, two anemones can be kept together with two species of clownfish, each of which is kept as well. The tank that you choose should be at least 75 gallons in size or bigger, depending on the species of anemone you choose to keep.

Although Brown Clownfish are not easy fish to keep, they are not too difficult to keep in a tank. It will be a great, unique addition to your tank. The above article is the basic information about this fish so you can keep them easily. Try raising a Brown Clownfish now.