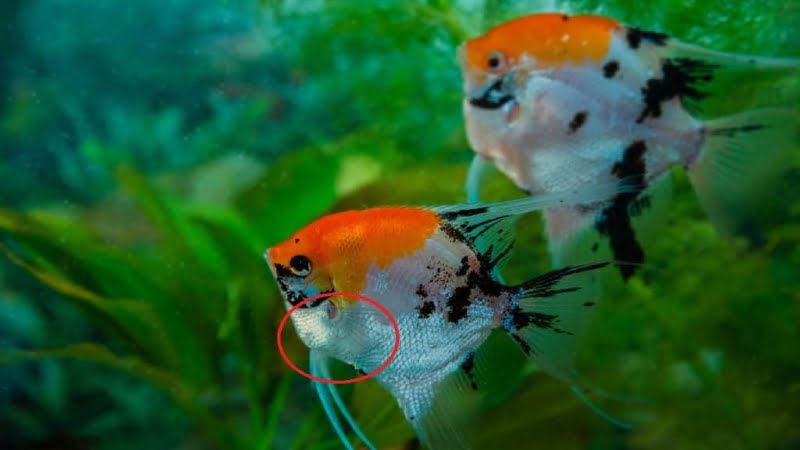 If you want to know pregnant angelfish behavior, you have come to the right place. This fish species don’t display many changes during pregnancy, and aggression isn’t the clearest sign that indicates the phase.

To determine with the highest accuracy if the changes of behavior are due to spawning or not, we have to pay attention to the time before that when the angelfish manifest mating activities. Please get to know the details with me below.

Getting to know angelfish spawning behavior requires some investigation into the mating signs. I will explain both to facilitate the process of determining if your female angelfish is pregnant or not.

Happy Dance Between The Male And Female Angelfish

If you keep both male and female angelfish together and one day, two of them start to do a little happy dance together, they are bonding, and the chance of spawning fertilized eggs is high. How does the dance work? The pair will give each other kisses and touch each other with their caudal fins.

Speaking of the happy dance, that isn’t always the case. Sometimes, the dance becomes slightly aggressive between the two, and it seems like an episode of Bridgerton. The tail slaps seem more forceful, and the kisses look like nippings. However, if both of these signs appear, you can trust that they are doing the mating dance, despite it being slightly aggressive.

Check The Abdomen First Or Other Pregnancy Factors

You may be able to tell if your angelfish is pregnant simply by watching your female’s abdominal area. There will be an abdominal bulge in the ventral region that will grow gradually as the pregnancy progresses. The female angelfish become bulkier, and it’s visibly apparent to determine.

Additionally, the gravid area will get more prominent as it appears to resemble a black patch located in the posterior region of the abdomen, right under the pelvic fin. The gravid spot is very pronounced during pregnancy, even though they are typically visible in any normal condition for the female fish.

Female Angelfish Will Clean A Spot Frequently And Rigorously

Female angelfish don’t simply go into labor and lay eggs anywhere possible. They pay attention to the hygiene of the surface on top, which they spawn. The mother angelfish will clean a spot rigorously and frequently a few days before laying the eggs. The surface can be a glass wall or a bushy area with lots of greens. The critical part is hygiene as the surface doesn’t have to be smooth.

In fact, if the mother fish choose a bushy area, it means she finds the place safer to lay eggs, and it can protect her young from other tank mates or predators. If you can provide the mated couple with a separate breeding tank, they will be more laid back in the spawning zone.

Aggressive And Protective Towards A Certain Territory

A pregnant angelfish behavior inevitably becomes more aggressive since it feels the need to protect itself from another tank mate to ensure the highest spawning success rate. But, she will also become more territorial regarding a certain area: the spot she cleaned for laying eggs when the time comes.

Pregnancy causes mood swings, and it applies to the beautiful angelfish as well. When female angelfish carry eggs, they won’t show much interest in food. And this behavior is abnormal for angelfish – a species that always seems like it’s hungry. However, not eating much food can also be a sign of stress or diseases. So you have to combine this behavior with other factors to decide if it is spawning or not.

Another sign is the chance of activity. Pregnant angelfish are lazier to conserve energy for later care of the eggs. They swim slower than usual and don’t hang out near the surface as they usually do. You will find them hanging out near the bottom of the tank more frequently.

Fun fact: female angelfish lay eggs without having to mate with another male. Therefore, we can arguably say that female angelfish are always in the pregnant mode when they reach 6 to 12 months old. They will constantly lay eggs every 12 to 18 days or even less if the males are around. Removing their batch of eggs from the tank will force them into spawning mode again and provoke new angelfish spawning behavior.

However, these eggs won’t be fertilized since they don’t interact with a male angelfish’s sperm. The eggs will remain unfertilized and for a few days, they have a transparent color, which seems like healthy eggs that will hatch into beautiful angelfish fries.

But, after this time period, the eggs will turn white due to being dead or catching fungus. If the water filter can’t process them, we have to manually remove the eggs from the tank to avoid contaminating the water with diseases, bacteria, fungus, etc.

Are angelfish livebearers or egg layers?

Angelfish are egg layers, and they are often mistaken for livebearers. Female angelfish will lay hundreds of eggs on a surface, and the male will fertilize them by touching them with its papilla.

How long do angelfish carry their eggs?

An angelfish is known to carry eggs for about two weeks, but the time can vary a lot. Some takes more time to spawn, while others lay eggs earlier. It is all dependent on the conditions in the aquarium as well as the angelfish.

Do angelfish eat their fries?

Angelfish don’t usually exhibit cannibalism and are considered some of the best parents in aquariums. But, on some of their first spawns, they might get confused and feed on their eggs or fries. Things get better after a few times when they have more experience in breeding and taking care of their young.