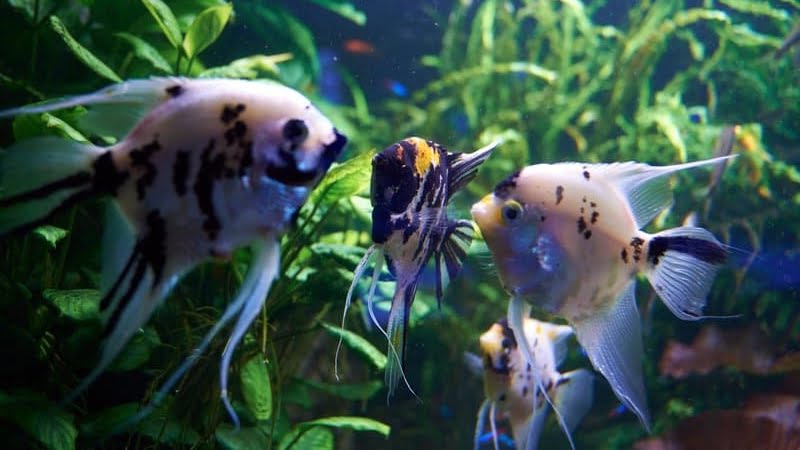 A lot of people think that angelfish can be calm pets because of their calm personalities. Most people enjoy having them around because, in addition to the fact that they are simple to maintain, the angelfish behavior is also predictable.

It has been noted, however, that you might notice that your angelfish sometimes display strange behavior, which can cause you to become concerned. The common fear of many people is the fear of locking lips, which is known as “kissing.”

The behavior of Angelfish locking lips is something many people worry about, but it is actually completely normal for them to do this while they are mating.

This type of behavior is seen by both partners when a couple pairs off with their mate. Similarly, if there is a fight between the angelfish, they could also be competing for dominance. As long as you pay attention to their behavior closely, you can be sure that this is the case.

Our next topic is kissing, as well as some other common behaviors that angelfish display when looking for a mate. We will also explain what you should look for and why you should monitor your angelfish behavior in order to find out whether it is necessary to treat them.

The very fact that your angelfish are together with their lips interlocked and twisting around in a funny way- which many angelfish owners refer to as “kissing”- does not necessarily mean that anything is wrong with them, and does not mean that you should take such precautions as to stress your fish.

Many fish will display this behavior at one time or another throughout their lives. However, it is also very important to know that this pattern of behavior is one of many that an angelfish will display during a wayward mating period.

Apart From The Physical Act Of Kissing, How Can You Determine If Your Angelfish Are Mating?

The test is not one that becomes difficult for us to solve. However, we often notice that with the onset of mating season, the female angelfish show aggressive behavior, and that is not typical for a female fish to behave.

In this regard, even though it’s entirely normal for mating angelfish to lock lips and be drawn together in this manner, it surely couldn’t be the reason that they’re doing this.

An angelfish kissing each other is also an indication that they are in a fight with each other. In this case, the angelfish of both sexes will be of the same sex.

Unlike most animals, angelfish also want to ensure that the genetic material that they possess is passed on to the next generation by breeding with as many mates as possible.

The first thing you will notice about a pair of angelfish is that they are locking lips. There is a possibility of competition with other angelfish of the same sex, so this is seen as a threat.

You can only find out for sure whether or not this behavior is present in your angelfish by watching their behavior, as well as observing what other types of behavior they are displaying in addition to lip-locks.

How To Determine Why Your Angelfish Are Locking Lips

The best approach to finding out what your angelfish are doing and why they’re locking lips is to watch their behavior over a period of time, no matter what you do.

There are some things that you can do here and there to find out if there’s some cause for their “unusual” behavior while keeping them.

Are You Using The Right Size Tank?

The first and most important step in getting an angelfish is to ensure that the tank is large enough for them. This should be completed even before you purchase them because angelfish are territorial fish.

If you are planning to keep more than one angelfish in the same aquarium, then your tank must be large enough to permit each fish to have its own personal space.

A tank that holds at least thirty gallons should be your goal. It may be that the tank is causing the problem, so in this case, you might want to get a bigger one and see if this solves the problem.

What Gender Are Your Angelfish?

You can really help yourself in determining whether the lip-locking behavior is a sign of mating or combat by determining the sex, but finding the sex can be rather challenging.

Experts can sometimes be unable to determine the gender of an angelfish, even if they have experience with it.

Is It Apparent That They Are Chasing Each Other?

It is also crucial to observe what your angelfish do, following the lip-locking behavior that they display. As we already mentioned, females of the same sex, as well as males as well, will enlarge their bellies and become more aggressive towards their fellow males.

The male and female will also be able to be seen together as they attempt to discover the right place for the female to lay her eggs.

The angelfish, however, do not typically avoid each other if they are fighting, as they are chasing each other instead.

Observe Whether Eggs Are Present

Many people have reported that they were unable to find the eggs in their fish tank due to the fact that it might be difficult to see the eggs.

Nevertheless, keep in mind that part of the mating ritual includes finding a safe place for the female to lay eggs, so it’s a good idea to check for areas in the tank that look particularly dug out and clean.

Having said that, if the eggs are not fertilized, they will likely appear more opaque and white because some of the eggs will turn white over time. Fertilized eggs, however, maybe a little bit more challenging because their color is clear and they are a little more discolored.

For the sake of getting a better picture of where lip-locking behavior comes from, you should keep an eye on your angelfish for a week or two or so at the very least.

When determining that the manifestation of this issue is the result of mating, there is nothing else that you need to do.

As long as they fight, the situation is extremely likely not to have to be dealt with at all. Angelfish are known to often become territorial and will fight whenever they feel threatened.

When you observe and monitor their behavior, you will be able to determine why they are locking their lips.

I would recommend segregating the fish when fighting continues and one fish clearly appears to get bullied.

It is imperative that you give them the right kind of food, that you place them in a tank that is big enough, and that they have enough privacy.

You cannot allow your angelfish to have a healthy relationship without allowing each one of these aspects to be considered seriously.

What is the maximum number of angelfish I can keep in one tank?

The majority of the time, there will not be any problems in keeping two angelfish of the same sex in the same tank. There is no doubt that the most important factor was the size and design of the tank.

You should ensure both of the fish have enough space to swim around freely without having to worry about potential fights.

Do a female angelfish have the capacity to lay eggs without the male?

Despite the fact that you do not have a male mate for your angelfish, she will produce eggs regardless, but these eggs will not be fertilized and will eventually turn opaque.

In their absence, a male angelfish would fertilize the eggs, resulting in the translucence of the eggs, which would lead to guppies being born.

What are the signs that my angelfish are mating?

After some time, you will notice a pattern of behavior in your angelfish that is evident when they are in the process of sex.

As you can see from the picture above, the female fish is showing aggressive behavior as she shows a bulging belly.

You will be able to tell that they are ready to mate if you see your male angelfish grooming one another.