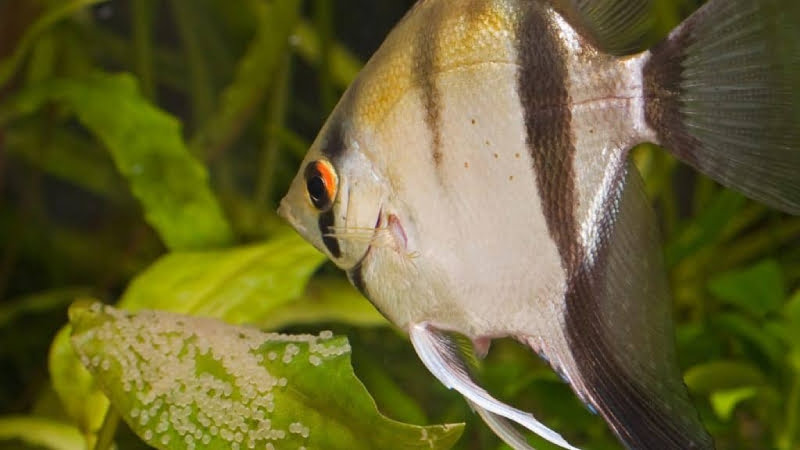 The most fascinating thing about angelfish is not only their personality but also the reproductive traits they have. Many creatures cannot lay eggs or give birth if they do not have the presence of a male. But is it the case of angelfish? Will angelfish lay eggs without male?

Now, find out the answer in this article.

Will Angelfish Lay Eggs Without Male?

However, if these eggs are not fertilized by a male angelfish, they will not result in fry. An unfertilized egg turns opaque white and dies after a couple of days. Then, they will either be eaten again by the female angelfish or be just left to be forgotten completely. You should remove any leftover eggs from your tank as soon as possible because they can provide a breeding environment for nasty fungi.

Eggs Without A Male And With A Male – What Happens?

If the female angelfish has a male partner and finishes her mating ritual, she will quickly find a place to lay her eggs. After thoroughly cleaning the location, they will lay their eggs vertically on an item they find safe and secure to raise their young.

They will take turns fertilizing and hatching the eggs. They will also alternate fanning their fry. Fanning is supposed to provide eggs with the right amount of water flow so that they are more likely to spawn successfully.

Generally, a single female angelfish will produce a clutch of eggs every two weeks. It varies based on the individual fish.

When the female angelfish have just laid eggs, they will fiercely protect and defend them. Their parental instincts urge them to do so, even in the absence of a male partner.

She will continue doing this for a couple of days but then completely give up on that idea. In the end, the eggs will turn white and begin to develop fungus. She eats them up sometimes, so you don’t have to worry about cleaning up afterward.

What To Do With The Eggs – Hatched And Un-Hatched

I would not worry about a single male angelfish. However, in the case of an egg-laying female fish, whether with or without a partner, we would need to be proactive in our approach to the egg issue.

If you have only female angelfish in the tank, remove the eggs when they finish guarding and protecting them. This is the ideal time to clean up the tank.

When you have a couple of angelfish and want to make sure they produce fry, then it is important to ensure that they are provided with an ideal environment. Keep any fishes away from the fry that could potentially eat them.

Also, if you use a regular filter for them, it may be too powerful and it might suck them away. Get a sponge filter instead to clean the aquarium gently without harming any fry. In about a week, they will become independent, and you can then go back to using the regular filter.

The diet of fry should consist of freshly hatched brine shrimp and should be fed three to four times a day. They can start eating regular fish food once they are large enough.

Should You Get Them A Male Partner?

Breeding them in pairs from the beginning is often recommended since pairing them when they have already become adults becomes difficult. When they are already adults, they might bully their new partner and refuse to accept it.

While some will be open to a new partner, others will ruthlessly let you know they don’t need a male partner (e.g., killing the new partner).

Making a decision about whether to get a partner becomes a little more complicated. Angelfishes do not feel lonely, as they are pretty adaptable to solitude. Nevertheless, not all of them feel this way. If they have already experienced companionship, they may feel off without their mate.

However, you won’t know for sure until you introduce them to a new partner.

Does the male or female angelfish guard the eggs?

Both male and female angelfish will jealously guard the eggs. They can display aggressive behavior toward other fish in a community tank as well as even toward their own mate. During this time, you should keep an eye on your aquarium to detect if certain fish need to be separated for a period of time.

Should I remove unfertilized angelfish eggs?

Unfertilized angelfish eggs should be removed as soon as possible, regardless of whether the eggs are due to poor water conditions, the absence of a male angelfish, or a fungus infection.