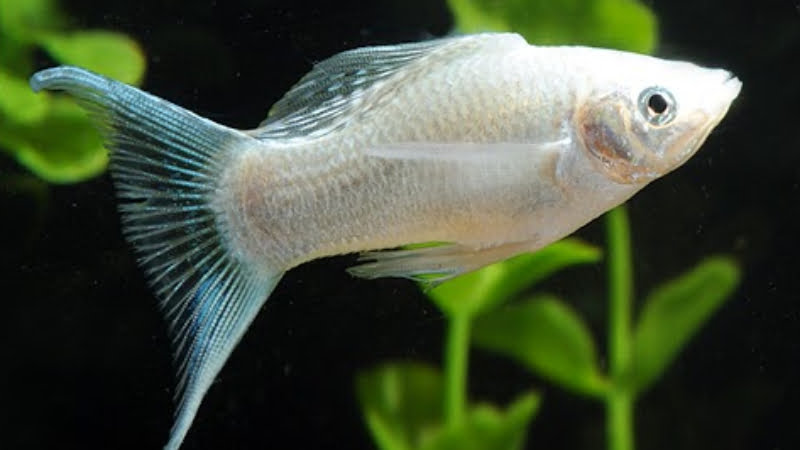 Mollies are among the world’s most fascinating fish species. And they’re often seen in aquariums. Platinum Molly Fish, in particular, is a favorite. They show off a stunning white color scheme.

Keep reading to learn more about how to care for lyretail mollies properly. Which includes everything like tank upkeep, feeding, body size, and more.

The Platinum Molly, commonly known as the Silver Molly, is a tranquil fish that enjoys hard water. It is white or silver in appearance and has a calm demeanor. A range of salt levels may be accommodated by these mollies in the aquarium. Additionally, these fish may be kept in freshwater or saltwater aquariums with a moderate adaptation. In order to maintain optimal health in a freshwater aquarium, it is advised that a teaspoon of aquarium salt per gallon be used.

At least 25 gallons of algae and space to swim are necessary for the Silver Molly to reach its maximum length of 5 inches. If there is not enough area for him to swim, the male’s dorsal fin will not grow. This fish should only be kept in a tank with other calm fish that love hard water and high salt concentrations.

Molly needs to be fed once or twice a day. And please note that you do not overfeed Molly at any point. The meal should be devoured in a matter of minutes. If not, you’re giving Molly too much food in one sitting. You may purchase flakes food formulated specifically for tropical fish, such as the Molly, from your local fish shop.

However, Molly’s primary source of nutrition should be flake food supplemented with live food. Molly can live on flakes alone, but live food provides better nutrition and wellness for them. And a  popular Molly fish meal is Brine Shrimp, which can be made at home and is quite simple to get. Besides,  Molly will also eat Bloodworms, Microworms, Fruit Flies, Mosquito Larvae, Daphnia, and cut-up Earthworms.

Molly’s reproduce in the same manner as Guppies do, and it may be tough to keep them under control! For the most part, the females are pregnant at all times and can retain sperm for up to 6 months. Approximately 10 to 40 fry will also be born every four to six weeks, depending on the mother. Setting up a breeding tank is one of the greatest ways to ensure that you have a steady supply of healthy, vigorous fry.

Fry can easily hide in a 10 gallon tank, which has abundant of vegetation like Java Fern or Java Moss. Many community tank owners utilize breeding traps or nets. These are floating containers made of plastic or net. Adult fish may be easily stressed by them, which can lead to miscarriages and even death. In the event that you have to use them, please only place them in the trap soon before the female is expected to give birth, and maybe even better, wait until the fry have been born before catching and adding them to the trap. Make sure to replace the water in your plastic trap on a regular basis.

Raising molly fry is a piece of cake. A planted community tank would probably be able to support at least a few fish from each brood. Alternatively, a second “growing on” tank might be used to store more of them. Again, a simple 10 gallon tank would suffice. To avoid snatching up the fry, just use an air-powered sponge filter. For the first several days, you may give them liquifry, followed by finely crushed flake meals. Brine shrimp, especially little ones, would be a nice addition. Because fry are more vulnerable to pollution than adult fish, it is important to do a little water change every day and remove any excrement or dead fry from the tanks.

Because these fish are particularly sensitive to water conditions, the acclimatization process is extremely crucial in the case of these species. Attempting to expedite this process will just make it more difficult. Therefore, f ish should be kept in their new tank with the lights off for at least the first four hours and must not be fed for the very first twenty-four hours. The Drip Method and the Floating Method are the two acclimatization techniques available.

It is recommended that the aquarium lights are turned off, and that there is dim lighting in the room before transferring the fish to the tank. And the bag in which the fish are should be left to float for about 15 minutes, allowing the water in the bag to adjust to the water in the tank.

Before cutting beneath the knot, the bag’s top edge should be rolled one inch lower. After that, add 1/4 cup of aquarium water to the bag and continue the process every 4 minutes until the bag is filled. The bag should then be drained of half its water, refloated, and /14 cup of aquarium water added every four minutes until it is full, then the bag should be sealed. The Discus may then be placed in the aquarium.

The aquarium lights should be turned off, and the lighting in the room would also be dim. After that, place the bag containing the fish on the surface of the water for approximately 15 minutes to enable the water in the bag to acclimatize to the water in the tank. The contents of the bag should be emptied into a one-gallon bucket which has not been cleaned with chemicals, and the fish should be immersed completely.

It is also important to set up an aquarium siphon, utilizing airline tubing, as well as a drip line from the main aquarium to the bucket. . To control flow, tie a few loose knots in the airline tube. A siphon is started by sucking the end of the airline tube that leads to the bucket; the flow should be kept between 2 and 4 drips per second. Half of the water in the buckets should be removed and the procedure repeated until the water in the buckets has doubled once again. The fish may then be transferred to their new home, the aquarium, at this point.

It’s important to remember that the condition of your fish tank is very important to their health. However, acquiring a proper aquarium is not difficult, but it is best when you study ahead for sufficient preparation. Also, there are many aspects you have to take into account while designing an aquarium tank. Sizes, appropriate tank mates, and water quality are all taken into consideration. Furthermore, many aquarists have imagined buying a tiny tank would be signifying a smaller expenditure. Rather than saving money up front, beginning with a tiny tank can cost you in the long run.

The Platinum Molly seems to be a peaceful fish, but they need salt in their water, which is why they are paired with species that can survive in salty environments. Despite the fact that it is more sensitive to temperature fluctuations and pH changes than other species, it is a tricky fish to catch.

Temperatures of 70 to 82 degrees Fahrenheit are ideal for a tank, and at least 5 gallons of water with plants are required for males to grow their dorsal fins to their maximum height. It is also necessary to keep them in freshwater aquariums that include at least one teaspoon of aquarium salt per gallon in order to maintain their health at its best. Additionally, breeding this fish will necessitate the removal of any newborn fish, since both the male and female are known to feed on their own offspring.

In order to keep your aquarium at home, you’ll need to have a water changer. It comes with a valve that enables water to flow out of the hose while also allowing water to flow in via the hose. Furthermore, a water changer is a piece of straightforward equipment that even the most inexperienced user can use. To use it, you only need to connect it to your faucet and draw water from the aquarium. After that, turn on the aquarium’s water supply switch to fill it with water.

Mollies have a proven track record of coexisting peacefully in a communal tank. Platinum mollies, on the other hand, are schooling fish, since they like to congregate in large numbers. Some aquarists, however, prefer to grow them in a tank with just one kind of fish. This is due to the fact that mollies are fin nippers, and so may not be suited for catching long-finned fish. Platies, Guppies, Tetras, Swordtails, Gourami Fish, and Pleco Catfish are just a few of the species that are excellent for keeping with mollies.

You’re likely to see platinum in most aquariums since they’re tranquil and lovely fish. Comparatively speaking to male bettas, they are compatible with a wide variety of other species. Furthermore, mollies are a peaceful animal. Despite this, there are certain signs of aggression in some situations. For example, guys are known for being violent against one other in order to compete for power. Also, the males may compete for the attention of a female molly in the tank, which may lead to fighting. One thing to keep an eye out for, though, is a little nipping action. As a result, we strongly advise against keeping mollies in the same tank as fish with long fins.

What is the Platinum molly food?

Platinum are omnivores, eating algae, tiny invertebrates, and plant debris in their natural habitat. You should also feed your fish the same food in your home aquariums. It’s because their taste buds never alter. Many other veggies, such as zucchini and cucumber medallions and shelled peas, are available as well as flake food. In addition, mollies eat a large amount of vegetables as their primary source of plant nutrition. You may use a flake or spirulina-based pellet if you don’t have time to cut or blanch veggies. You may, however, include a tiny amount of veggies in your meal preparation. If you don’t add salt or any other spices to the cuisine, you may just produce salt from scratch. In addition, feeding frozen or live items to your fish will encourage them to reproduce. Bloodworms, brine shrimp, and daphnias are other examples.

How big do platinum mollies get?

The baby of “mother mollies” is often quite small when it is born. Mollies fry are usually half an inch in length at birth. However, the average size of an adult fish ranges from 5 to 10 cm.