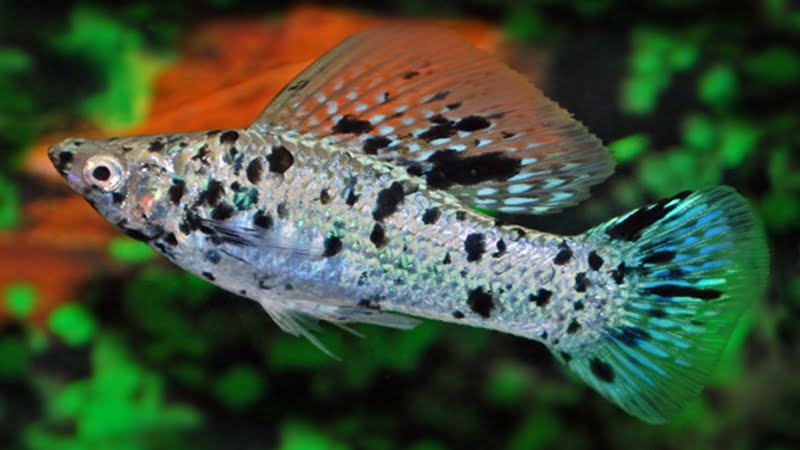 Many pigments in animals are derived from the food they consume, Blue Molly Fish included. The most common is the red pigments known as anthocyanins, the appearance of which can be altered by varying acidity. What about blue dye?

Even at first glance, the color blue can entice you. Unfortunately, neither plants nor animals have an actual blue color. Any blue animal or blue flower simply uses a trick of light to appear in this eye-catching hue.

Aside from Blue Mollies produced by breeders, there are some types of Mollies in nature that can attract your attention in this prominent blue. Here is all the information that may be useful to you.

Blue Mollies In Nature: What Are They?

There are two explanations for the naturally blue hue of Mollies: one is that the blue appeared at the time Molly was born, and the other is that the color changed. This section will show you a list of Blue Mollies that you might encounter in the first case.

This fish was once thought to be a variety of Poecilia sphenops, but it was subsequently identified as a separate species. It is very rarely found in tanks, despite its attractive color, so seeing it in the waters of El Salvador is easier. It is partly owing to the fish’s aggressive nature – the fish attacks both its relatives and other tank inhabitants.

A Liberty Molly has a silvery-yellow body. It may have a slight hue of light blue. The abdomen and dorsal fins are extremely brightly colored (red, black, or white).

Common Molly is the fish from which black molly, the most popular aquarium fish, evolved. Nowadays, natural fish coloring is uncommon in aquariums, as the wild species exhibits less vibrant coloring than its black variant. The top of the body is greyish-green with a slight light-blue tinge; the bottom of the body is lighter and varies in color from gray-white to silvery-blue. Dark patches of varying hues are distributed around the fish’s body.

Poecilia sphenops has an elongated, sturdy, and flattened body with a well-developed spherical tail fin. The fins are little. Its mouth is designed for consuming food from the water’s surface and scraping algae. The body length varies between 2 and 4 inches (5-10 cm). Females are slightly larger than males.

It resembles Yucatan Molly but is smaller and has a distinct coloration. The body is tall, tall, elongated, sturdy, and flattened on the sides. The dorsal is a tall, rectangular structure with 12-14 rays. The tail fin is well-developed and round.

The hue is predominantly bluish-grey. Males have a green-blue tint to their color and rows of glittering white dots on their sides. The bottom of the body has a vibrant orange color. Bluefins with orange margins, bright dots, and dashes.

In this part, we’ll discuss the rest case: the blue hue because of changing color in Mollies.

Some breeders said that their Dalmatian Molly had suddenly changed their color to some blue spots on their tail. That’s not any disease at all, so may it’s a surprising gift for the owners.

Normally, Dalmatian Mollies, like Dalmatian dogs, have black spots all over their bodies.

The brightly colored plants and other schooling fish in this tank are sure to draw attention to these fish. This is a good place to keep them. Hardy: It can live for a long time in water that isn’t the right temperature or pH, but you should keep the ideal pH of the water is between 7 and 7.8. The Dalmation Molly likes tanks that are bigger than 30 gallons. It can grow to almost five inches long.

Dalmatian Molly has a lifespan of 3-5 years and costs between $4 and $8.

They’re eye-catching and come in a variety of colors ranging from gold to blue. When they are most excited, they are deep blue-black, while when they are relaxed, they are light olive green with shiny blue scales, similar to the females.

They are classified as shortfin or sailfin mollies. The shortfin is smaller than the sailfin. Males have a significantly more flamboyant dorsal fin, with twenty rays, compared to the sailfin’s 14 rays. Without a large tank, the Yucatan Molly’s dorsal fin will not develop. To be considerate, please keep the tank warm to ensure the happiness of these fish. In the wild, they are found in warm springs and ponds among some weeds. They eat both plants and animals but are primarily herbivores. Maintain a pH of 7.0-8.0 and a dH of 20-30 to ensure their health and contentment.

The cause for changing color in these case

The Case Of Producing Blue Mollies

Besides the case that Mollies have natural color, many breeders have produced their blue Mollies for a long time. Here is an example.

First, he grabbed several Marble Sailfin Mollies with blue flanks and selected for more fabulous blue color. The resulting strain was named Blue Marble Sailfin after a few generations. But the result can’t satisfy him. Then, he decided to mate P. Mexicana, Campeche, Mexico, with Blue Marble Mollies. As I mentioned before, P. Mexicana (or Yucatan Molly) has a body-colored light blue to gray/olive. But he didn’t seem pleased again.

After that, he crossed P. Petenensis with our Gold Wag Lyretail Sailfin Mollies and had two strains that were named Blue Freckle Sailfin and Midnight Blue Sailfin. Honestly, I think what he did till that time was long patience. The blue of that Midnight Blue Sailfin is eye-catching in dark space, just like its name. But he said he’d keep going. Sure, he wants to win Giant Mollies with perfect blue.

I believe that this breeder, as well as a large number of other hobbyists and breeders, are on their way to developing their own blue mollies. Let us anticipate even more astounding achievements in the near future.

Habitat, Reproduction, And How To Care For Blue Molly Fish: Easy Or Not?

Blue Molly Fish’s habitat, like other Mollies, prefers to live in shallow surface waters. In the wild, they are usually found in loosely vegetated coastal streams. However, these fish are known to do well in lakes, estuaries, deltas, swamps, ponds, marshes, and even in ephemeral places like roadside ditches. They prefer to stay under floating vegetation or near structures to stay out of view of predators. Ideally, they like water with a pH range of between 7.5 and 8.5 and a temperature of between 64 and 82 degrees Fahrenheit.

They have 28-day gestation periods and produce 50-100 live fry per period. The length of gestation depends on water temperature. Females can produce live fry every 30-40 days, with 70% of the fry being female. Male mollies aggressively chase female mollies; therefore keeping two females per male reduces stress on females. Mollies are livebearers, not egg layers.

Mollies reach sexual maturity at a young age, allowing population growth. In aquariums, these fish can survive for three years on average and up to five years in some cases. Male mollies die more frequently, probably because they are smaller and hence more vulnerable to predators. But they are more prone to illness.

Young molly fish must instantly survive in the wild. After birth, their parents stop caring for them.

It’s not hard to care for and breed Blue Molly fish. Their favorite foods are worms, algae, plankton, and larval insects, as well as bits of floating food known as detritus.

Commercial fish foods are used to feed this fish when people are in an aquarium, so they do this. Many people also give bloodworms from time to time.

You should keep a small group of them instead of just one fish. Also, they don’t need a big tank.

What colors do molly fish come in?

In most case, they come in three colors: white, black, and yellow, and feature a back fin shaped like a lyre.