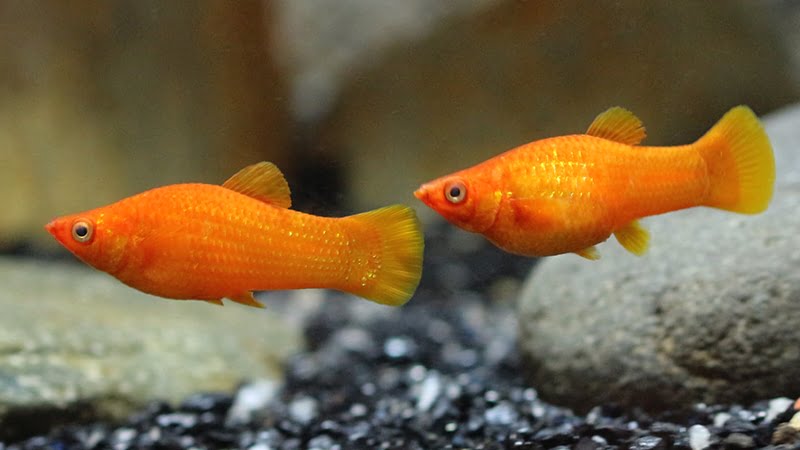 Because of its vibrant color, Orange Molly fish is a popular choice among hobbyists. However, choosing an orange one from a sea of Mollies appears to be a difficult task that could take a long time. Otherwise, there are some requirements that you should be aware of. Because we understand your curiosity, we have created this post in the hopes that it will assist you in your aquarium hobby.

Not only that, there is an amazing case of an Orange Molly fish that we want to show you immediately. What exactly is this?

Common Molly comes in many different colors, like red, black, yellow, marbled, and orange. There are wild-type specimens that are gray or light tan, and they are the same color. Every guest that stops at aquarium stores like orange because it’s so bright. They live in freshwater streams and coastal waters from Mexico to Colombia.

Communal fish like these will get along with small and medium-sized schooling fish, which makes them ideal for them. Tankmates for these livebearers should be fish like Platys, Swordtail fish, Guppies, and Danios, which are all good for these fish.

White on the bottom and gold on the top make it look like a creamsicle ice cream. It has long orange fins with a lot of orange spots on them. It is calm and happy to share the aquarium with other fish. You can start out with this breed because it looks good and doesn’t care about water temperature or pH.

When there is no competition in the group, these fish should be nice to their own species and other fish in the tank. They can be kept with Danios, Corys, Tetras, and other livebearers.

There are a lot of Orange Balloon Mollies out there. They have short, round bodies that look like an inflated balloon. This is true of both the fins and tails. The dorsal fin runs right along the fish’s body, and the fins are short as well. Besides, it has a pointed face that is a little long. The body is short and rotund with a characteristic balloon belly.

They’re omnivores, so you should feed them a variety of foods, like flake food and vegetables, because they eat algae and plants in their natural habitat. Orange Balloon Mollies are easy to care for because they can live in a standard tropical tank set up.

The Liberty Molly comes from Central America, mostly from El Salvador. Males and females are both the same color, but the males have more color.

For its bright red, white, and blue hues, it has been given this name. It has a white or silver body with fins that are red, black, blue, or orange.

Liberty Molly needs to be kept in a species tank with at least two females for every male. A 30-gallon aquarium would be ideal for three males and six females. It is likely to jump out of the tank, so it should be covered with a lid. It needs food that is made of plants.

There are a lot of different freshwater habitats where the Atlantic Molly lives, from the lower Rio Grande valley in the United States to Tuxpan in northeast Mexico. It can also be called a Mexican Molly or an Amazon Molly.

In Molly’s natural color, she is gray with yellow or orange highlights and fins that are yellow or orange. Some people have had their fins bred to be iridescent or have black pepper spots on them.

A tropical inlet is where this species lives, so your tank should be set up to look like 73 and 80°F water temperature and more than 15 dGH water hardness in order for this species to thrive. Include a variety of logs, roots, and plants that can grow in salty water.

Gold Dust Molly is only found in Mexico and the northern part of South America. A small creek, a lake, a marsh, or a swamp are where this animal lives. This type of fish is very sensitive to changes in the water, so the acclimation process is very important.

The golden color ranges from a bright yellow to dark orange. They have a golden yellow (or orange) body with black spots on their tail. Some specimens also have black spots on their heads and bodies, but not all of them do. Each of these fish can grow up to 4 inches long. When they’re in groups of 6 or more, these fish really come out.

Orange Molly fish, as Mollies, is a friendly fish that gets along with other fish. However, aggressive tank mates and a crowded tank might drive molly fish to become hostile.

Orange prefers to be kept in groups of four or more. Buy one male molly fish for every four female mollies in your tank to avoid fights and dominance issues.

Mollies are shallow-water fish, thus they swim along the tank’s rim. They are shy fish who seek refuge in vegetation and caves when they feel threatened. Mollies are diurnal, active during the day, and sleeping at night.

Mollies are found in shallow surface waters such as rivers and streams.

They can tolerate a greater variety of temperatures and pHs due to their adaptability. To ensure molly’s survival in captivity, you should create a naturalistic environment.

A thin layer of a sandy substrate can help hold plants in place in a molly’s aquarium. Mollies don’t spend much time at the tank’s bottom, so don’t worry about them disturbing loose-rooted plants.

Mollies find refuge in tall plants like anubias nana and short plants like Java fern. They can hide among rocks and caves if they are being harassed by their tank mates.

Mollies prefer brackish water in the natural, but reproducing this in captivity is difficult, limiting their tank mates.

Aggressive tank mates or overcrowded tanks make Mollies hostile. So keep molly fish with friendly fish and give them lots of space to swim.

Molly fish can also be housed with non-fish tank mates including:

Molly fish feed tiny insects and algae in the wild. Feed mollies the same diet in the tank to ensure they get enough nutrients.

Growing algae in your tank are the greatest approach to offer your molly fish this food source. If your tank doesn’t have enough algae to feed all your fish, feed them algae wafers. Plant-based molly fish choices include spinach, lettuce, and zucchini.

To give your Molly fish a varied diet, add fish flakes, live or frozen bloodworms, and brine shrimp. Provide a variety of diets for your molly fish, including plant debris, fish flakes, and live foods.

One more notice for you is feeding mollies twice a day. Allowing mollies to eat continuously for more than two minutes causes intestinal issues.

As you know, mollies prefer a tank with a temperature at around 80 °F, or even slightly higher. The required pH of water is up to 8.

The reproduction of Orange Molly fish is the same as other Mollies.

Because this is a livebearer, the fry will take longer to appear. After fertilization, gestation takes 35-45 days before you see the young and know you’ve succeeded. The larger females can produce up to 100 fry in one mating.

Because the fry and parents require different food, you should separate them. Feed the fry small pieces of fish flakes until they are big enough to eat their parents’ food. They can then be reintroduced into the same aquarium then.

A case of Atlantic Molly

As I mentioned before, Atlantic Molly can be called Amazon Molly. So, what does this name come from? In the mythology, Amazons (a female warrior tribe) reproduced by using males from neighboring tribes and slaughtering their male offspring. As with the legendary Amazons, Amazon mollies are exclusively female. They do not, however, kill their males; rather, they do not generate them in the first place.

How big do mollies fish grow?

A full-grown molly’s usual size range is four to four and a half inches. Sailfin species can grow to be even larger. They frequently reach lengths of less than five or six inches.