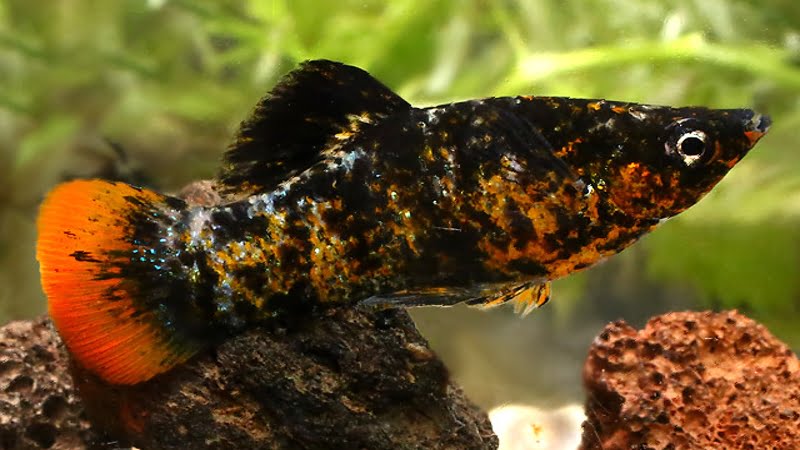 Here are the four most important things you need to know about orange and black molly fish. This fish species is a common choice for every aquarist, from beginners to professionals. But if you have never taken care of one before, getting to know their preferred living conditions is essential to keep them healthy as long as possible. I will tell you how to identify the males from females, take care of them, and detect abnormalities in this species.

Here are 5 most common aspects that tell male orange and black molly fish from females.

When comparing mollies’ body shape and size, you should make sure that every fish in the tank belongs to the same breeding period. Having fish from mixed development stage will make size comparison inaccurate.
Adult female mollies have slightly bulkier bellies than the males and have an overall rounded body shape. On the contrary, male mollies have slimmer bodies with not so visible bellies.

As for the size of the two sexes, an average male molly grows up to about 3.5 inches, while an adult female can reach 4.5 inches in length. These are pretty big community fish, so it’s best to put them in a spacious aquarium. If you want to keep 4 mollies in 3 female: 1 male ratio, it’s advisable to have a 15 to 20-gallon tank so that they can swim with ease.

Male mollies have a fan-shaped dorsal fin, which is very flowy underwater. The fin’s size is more extensive compared to that of a female. Female mollies’ dorsal fins are rougher looking and don’t have the flowy effect to them. Many aquarists prefer keeping male mollies for this aspect. Female mollies, guppies, swordtails, etc., always look less flashy than their male counterparts.

Male mollies are more aggressive than females. Males will fight each other if they have to compete for a female’s attention. What are the signs? If you see 2 or more mollies swimming quickly against each other and wagging their tails towards others frequently, chances are they are fighting.

Check for mollies with damaged fins or abnormal swimming patterns and remove them from the tank for better care. And make sure to keep your eyes on other males in the tank to identify the culprit.

When there are aggressive males in the tank, the stress level will increase and might cause diseases. Some may die quicker before reaching their average 4 years lifespan.

Personally, I don’t highly recommend identifying a female molly by observing if she has a gravid spot. But this method is still valid when deciding if your molly is a pregnant female or a sick and bloated male.

How To Care For Orange And Black Molly Fish

There are 3 things you need to pay attention to when you want to keep an aquarium of mollies.

Mollies mostly consume plant-based food. They will actively consume algae that develop within the tank. Romaine lettuce and zucchini also are standard options for feeding mollies. You can also choose flake food with added proteins and other healthy components that keep the fish healthy and intensify their coloration.

On average, an adult molly grows up to 4.5 inches in length. And you already know the rule, each inch of a fish needs one gallon of water to develop decently. So a 4-inch female molly will need 4 gallons of water to swim comfortably.

So when you pick an aquarium for mollies, make sure that you keep in mind the size of the fish compared to the tank’s volume and the accessories you want to add because they obviously occupy space.

Also, the male-to-female ratio is significant for tank members’ physical and mental health. It’s recommended to have 3 females per male to avoid competition between the gentlemen.

Since mollies are tropical fish, they won’t survive if the water temperature is too low. They thrive best in 75°-81°F water, which means you will need a heater that maintains the water temperature stable at this level. A hotter or colder temp will kill the entire community. The pH level of water between 7.5 and 8.5 is recommended for this species.

If you wish for all the mollies to grow in harmony and survive in the same tank, make sure you provide them with some hiding spots. You can put underwater greens or artificial decorations where the weak or young can hide under attacks.

Furthermore, it’s crucial to separate the females from their fries right after giving birth. Why? Because mollies feed on their young very regularly. Sometimes it’s due to the lack of food. Many times it’s because it’s a part of their nature. My suggestion is that you remove the pregnant females from the tank and keep them in a breed tank.

How big do orange and black mollies get?

Mollies can get quite big, up to 4.5 inches. Just like most fish species, female mollies are mostly bigger than males. Male ones grow up to 3.5 inches in length on average, which means they are smaller than females by 1 inch, typically.

How to breed orange and black molly fish?

A pair of orange and black mollies will give birth to fries of the same color. Since male and female mollies have the same level of colorfulness, the male won’t be the one to decide the color of the young totally. To make sure that the young inherit as much color as possible, you just have to ensure that the mother doesn’t get stressed.

How can you tell if an orange and black molly is pregnant?

Where can I buy orange and black molly fish?

eBay, AquariumFish, Arizona Aquatic Gardens, and LiveAquaria are some of the trustworthy stores where you can purchase orange and black molly fish. The prices are quite reasonable, the fish are healthy, and you can order them online.