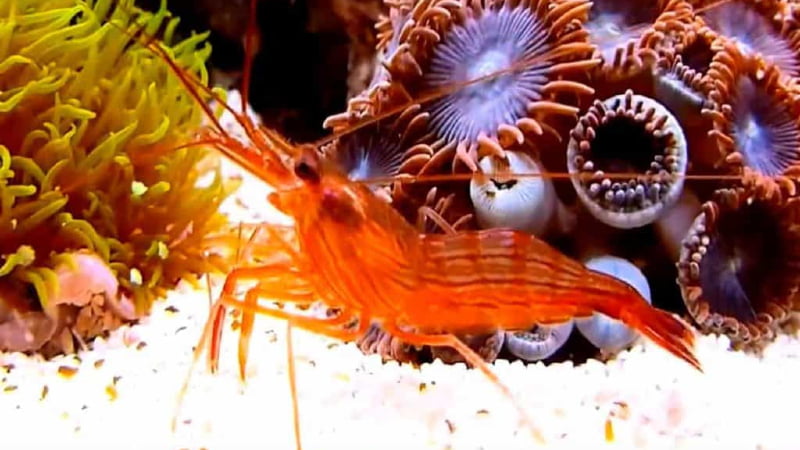 The peppermint shrimp over the years have become very popular not only because of their unique appearance but also the benefits they will bring to your tank. They are considered cleaning animals in a saltwater aquarium. You won’t need to spend much time cleaning your tank thanks to these invertebrates.

Peppermint shrimp lifespan can reach two years or more. But to reach that number, or life expectancy can be more than average, depends on the living conditions you will provide them. If you want them to live longer in the tank, buy young, small ones because the large ones may be nearing the end of their lifecycle and only live for a few months.

Here are some notes when caring for peppermint shrimp you need to keep in mind to help them achieve optimal lifespan.

Taking care of Peppermint shrimp is extremely easy and requires very little effort. So beginners or inexperienced can also breed them easily. Though this species is adaptable to a wide range of water conditions, there are some things that need to be taken into consideration. Shrimp you add to the tank, you need a tank that’s 5 gallons bigger than the old one. Follow the rules so that they have enough space for themselves and will do their job well. It’s best to keep Peppermint shrimp in groups so they don’t get stressed out when they’re alone.

Make sure your tank has live rock, hiding places, and open space to look for food. In terms of the substrate, there is no special selection requirement. Their habitats are multiple from rocky shorelines, hard-bottom reefs, tube sponges, to shell bottoms within inlets. Also, some plants should be present, either real or fake. During the day, the aquarium’s light should be on, and at night, it should be off.

In order to have a long-lived shrimp and for it to be an positive part of the aquarium, there are a few things that have to be considered. Peppermint shrimp, like all shrimp, prefer stability, which is the most important rule to remember. Changing things is not something they are fond of.

Let’s set up the tank with the following parameters:

The Peppermint Shrimp is omnivorous. They feed on food debris, detritus, dead fish tissue, and organic material in decomposition, etc.

Generally, they have little need for extra food since they find food in their aquariums on their own. They roam as much as they can so as to scavenge and consume leftovers, meat, and other debris living in the substrate. With such eating habits, they are considered as aquarium cleaning crew.

It is a good idea to add a piece of fresh fish or a sinking shrimp pellet every now and then. In some cases, you may not need to feed your shrimp with any food in them depending on the size of the tank and the amount of fish that are in it.

The brightest part of the tank is that they eat Aiptasia (glass anemones), the one of the most common pests in saltwater aquariums since they reproduce so rapidly and sting corals and fish. While the candy cane shrimp is known to consume aiptasia, it prefers smaller anemones rather than the larger ones.

Can peppermint shrimp be bred in captivity?

Thankfully, Peppermint Shrimps are one of the easiest shrimps to breed and nowadays you can easily find tank-bred shrimps in almost every aquarium store. Hobbyists who set up breeding setups can also rear young. This is a fun project you can take on if you are up for the challenge!

As with all invertebrates, they must molt (demolish the exoskeleton or shell) in order to grow. They molt more frequently when they are smaller than when they are larger. Peppermint shrimp tend to remain hidden to avoid predators during this process and are very vulnerable.

What are suitable tankmates of Peppermint shrimp?

The peppermint shrimp is known to be a really peaceful animal and gets along really well with some species of fish such as Gobies, dragonets, tetras, grunts, and filefish.

Because this shrimp has predators, it is very important to know which animals should not be placed in the same tank with this shrimp. They are Coral banded shrimp, Arrow crabs, the wrasse, and any fish bigger than 6 inches long.

The Peppermint shrimp is one of the many shrimp species favored by aquarists. With a lifespan of about 2 years, they will make a great contribution to your tank. It’s beauty, uniqueness, and tank cleaning. Above are the basic guidelines for you to take care of them in the best way so that they can have long and healthy lives.