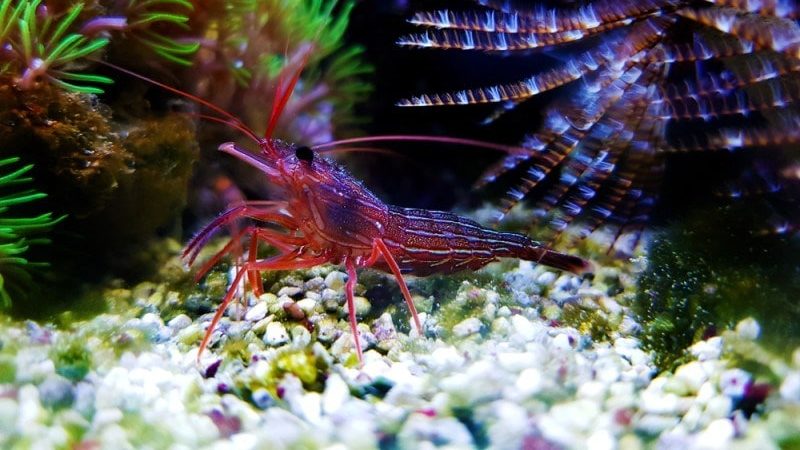 The Peppermint shrimp is a brightly colored saltwater reef shrimp that is inexpensive, fun, easy to care for, and can be added to your tank. They actually come with some cool benefits for your aquarium.

One question many people ask is how many Peppermint shrimp per gallon, which is also the topic of this article. In general, for every 1 shrimp, they need about 5 gallons of tank space. But the actual number can vary depending on many factors that we will cover in this article.

How Many Peppermint Shrimp Per Gallon?

In fact, not too much is information about how many gallons you need at least to raise 1 mint shrimp. The reason for this is that people don’t usually keep just one peppermint shrimp in a tank.

From all the information that I have researched, gathered and my personal experience, I think that peppermint shrimp requires about 5 gallons per shrimp.

One gallon is too small to raise a peppermint shrimp. You can keep each shrimp in 3 gallons at least, but this is not recommended. This shrimp is quite large, they can be up to 2 inches long. So you have to give them enough space. If you only keep peppermint shrimp, 6 in a 30-gallon tank is acceptable.

The space requirements when you keep only Peppermint Shrimp in the tank have been described above. However, if your tank has a lot of fish and other creatures, these space requirements don’t make much sense. In general, if you have a community tank with various kinds of fish, you should add an extra at least 3 to 5 gallons per peppermint shrimp. Adding them to a pre-existing tank shouldn’t be a big problem as they won’t take up too much room.

You should make sure that your tank has some small caves so the Peppermint Shrimp can easily hide inside. Tanks with live rock are great because they can live and scavenge on. In addition, they can also work with many other types of substrates. Overall, they’re very hardy and won’t cause you much trouble.

Peppermint shrimp like to be with their own kind, especially with those of the opposite sex as they can be a bit aggressive with the same-sex of peppermint shrimp. You really shouldn’t keep them alone. Having at least 2 is a good idea, a tank of at least 10 gallons is needed.

If you are going to add multiple Peppermint Shrimps, make sure they have enough territory of their own. Otherwise, you will not be able to predict what will happen. They can fight for territory. Worse, if your tank is small, the shrimp closer to the filter will be more susceptible to being sucked in by strong filtration.

Another thing to keep in mind is that you should not keep fish that are too large. Fish over 6 inches in length can be a predator for these shrimp. If you don’t want your peppermint shrimp to be eaten, don’t keep them with fish much larger than them.

Can you have more than one peppermint shrimp?

Can peppermint shrimp and cleaner shrimp live together?

Yes, peppermint shrimp and cleaner shrimp can exist together.

It is reef-safe and about as peaceful as reef crustaceans come. They are even hardy and easy to take care of. No wonder that the peppermint shrimp is one of the most popular reef aquarium invertebrates of all time!

I hope this article has provided some of the information you need about keeping peppermint shrimp. They are wonderful, easy-care creatures to add to your tank. Just remember to give them enough room, at least 5 gallons of tank space per shrimp. Or if you keep them with other species, also keep in mind the important notes I mentioned above.