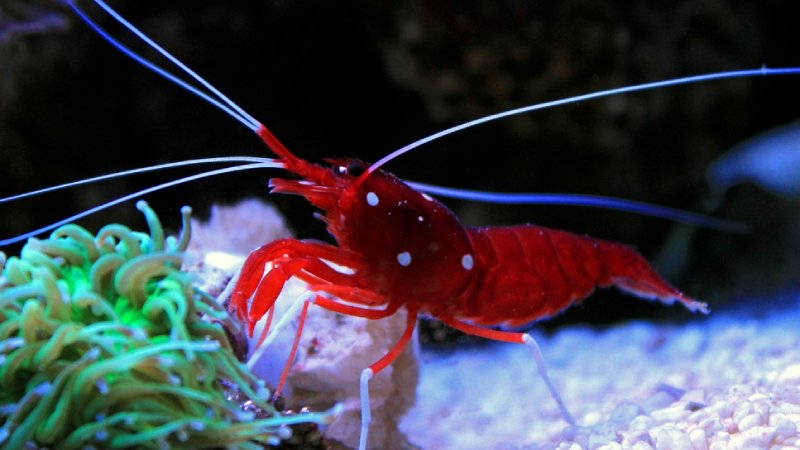 What do blood shrimps have to do with a reef? In this blog post, we will explore blood shrimp and their connection to the ocean’s environment.

Many saltwater shrimp are of the genus Lysmata and are pretty popular in the hobby. These shrimp are mostly brightly coloured, medium-sized, and fairly hardy, found in tropical regions all over the world.

Fire Shrimps grow to a maximum of two inches in length at maturity. They do, however, appear to be much larger due to their extremely long white antennae. In the intense colour competition of the coral reef, their shell is a vivid red with no equal. The Fire Shrimp live up to their name and are easily one of the top 5 shrimp for fish keepers due to this.

Several useful traits characterize shrimp species in the Lysmata genus. Many species eat Aiptasia anemones, but Peppermint Shrimp is the most reliable. Most of them also exhibit the famous cleaner behaviour of picking parasites and dead skin from fish!

Fire Shrimp can be considered reef safe: with caution. Peppermint Shrimps (Lysmata wurdemanni) typically don’t eat anemones or coral. Fire Shrimps are known to occasionally nibble on zoanthids and small polyps of stony corals, however. Even so, it’s rare.

As scavengers, the Fire Shrimp might have been going hungry since they won’t be able to find enough leftover juicy bits in a well-maintained reef aquarium. While many aquarists have no problems with them, I might be tempted to keep one myself! There’s no way you can ignore them!

As with most marine aquarium shrimp, Blood Red Fire Shrimp are easy to feed. They primarily eat leftover residues from the meals of your fish. Some of their favourite foods are uneaten flakes, brine and Mysis shrimp, and water-softened pellets.

So long as their tank mates don’t behave too aggressively or boisterously around the table, they usually lose their shyness when eating. You might want to target feed your Fire Shrimp with an eyedropper or by hand to ensure they get a few scraps. Fire Shrimp are also prone to cleaning their hands when presented, so getting them used to your presence inside the tank is important!

Fish such as hawkfish and marine bettas are absolutely incompatible with this species of shrimp. I would recommend adding them to any tank with fish large enough to eat them because I have even seen a relatively large flame cardinal swallow a cleaner shrimp whole within seconds of adding it to the tank.

In most cases, you won’t see a great deal of fire shrimp in your tank because they are shy, nocturnal creatures. The fact that they are so beautiful (and so expensive) is a bummer. You may be able to coax them out of hiding more frequently over time and with some strategically timed feedings. During intense light times, you won’t see them. They go out looking for food when the light is off or when it is dim. It is okay to provide only a small amount of lighting if their tank mates or live plants do not need strong lighting.

The Fire Shrimp is compatible with most other community reef fish, excluding the fish that eat the Fire Shrimp, and is probably advantageous if you keep fish that are susceptible to parasites, like the blue hippo tang.

You may also be able to recognize fire shrimp (at least as a food source) if you’re smart enough. Some aquarists report that their scarlet cleaner shrimp welcomes them when they approach the tank, climb on their hands, or takes food from them. I have kept shrimp over the years, but they have mostly been fearful of me rather than attracted to me, but this might be a good time to start trying again.

It is generally peaceful with most other organisms in the reef system unless they intrude on its territory.

Cleaner shrimp are scavengers and, well, cleaners. They are not predatory to corals.

They are deeper water shrimp, and so they like the dark. They will consume leftover fish food and eat algae etc., from the rocks.