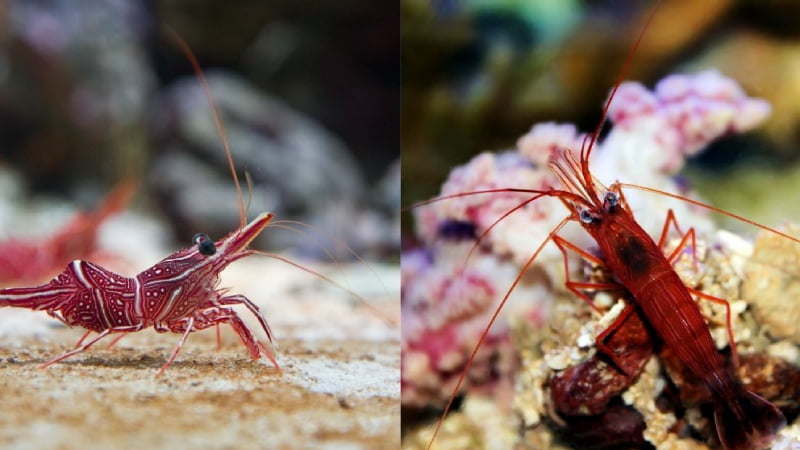 If you are a shrimp lover and want to keep some of them in your tank, you already know there are many different types of shrimp. Shrimp are divided into different types depending on factors such as habitat, diet, appearance, and more.

However, sometimes people still confuse two different shrimp species. For example Camel shrimp vs Peppermint shrimp. The confusion between these two shrimp species is understandable because they have similar appearances, it is easy to confuse if only at a glance.

Peppermint shrimps and Camel shrimps are classified separately in the scientific nomenclature.

Rhynchocinetes uritai is another name for the Camel shrimp. Additionally, this shrimp belongs to a family called Rhynchocinetidae.

The Camel Shrimp is also known as the Camelback Shrimp, the Hinge Beak Shrimp, and the Dancing Shrimp.

Peppermint shrimp, on the other hand, is called Lysmata wurdenmanni. This type of shrimp is part of the Hippolytidae family.

Peppermint shrimps also go by several other names, including Caribbean cleaner shrimps, Candy Cane shrimps, or Veined shrimps. They’re also known by these names, so you can search for them by these names too.

The Camel shrimp and Peppermint shrimp are native to different parts of the world (mostly tropical). Various differences also result from this.

There are several different kinds of Camel shrimps that can be found in the East Indian Ocean, Indonesia, East Pacific, as well as Australia.

Peppermint shrimps are also known to be more prevalent in tropical climates throughout the world just as Camel shrimps are.

Therefore, they can often be found near tropical areas such as the Caribbean or Florida in the East Atlantic ocean. The reason why Peppermint shrimps are referred to as Caribbean Cleaner shrimps is due to this reason.

Because of the similar appearance of Peppermint shrimps and Camel shrimps, this is one of the main reasons why they are mistaken.

In spite of this, if you dig deeper, you will find that there are some dissimilarities as well.

A Camel shrimp is known for its cherry-red color, which makes them stand out. However, that’s not the end of it. There are also special markings on these shrimps, such as white stripes or dots. There is no doubt that these patterns are extremely bright.

Camel shrimp and Peppermint shrimp have one obvious difference in how they appear if you look at their appearance. The Camel shrimp has a hump on its back like a camel. Thus, Camel shrimps also refer to themselves as Camelback shrimps.

Peppermint shrimps, on the other hand, do not have a hump on their bodies.

These shrimps, however, have their own special markings as well as patterns, just like Camel shrimps. It’s worth mentioning here as well that the patterns on these shrimps are not as white as those on Camel shrimps. They are made out of two colors red and white. This gives them an appearance of the color of a candy cane. Thus, it makes sense if Peppermint Shrimps are also called Candy Cane Shrimps for this very reason.

By understanding the social nature of your shrimp, you can more easily determine whether or not you can keep them in an aquarium.

Camel shrimps, as far as their behavior is concerned, can be judged as quite peaceful. The fact that they are social too, means that they can easily mix with the other organisms in your tank. In spite of the fact that they are friendly creatures, they mainly stick with species of their own kind.

Be aware that shrimps of this species shouldn’t be kept in reef tanks since they can feed on soft corals, polyps, and sea anemones. Thus, keep them apart.

Compared to these shrimps, peppermint shrimps are known to be more aggressive.

Hence, do not get too many of them for your tank if you’re planning on buying some. The reason for this is that they can sometimes be aggressive towards other creatures and become a danger to them.

Peppermint shrimps are also not recommended for reef tanks, just like Camel shrimps. The reason is that they can consume coral and sea anemones.

Camel shrimp and Peppermint shrimp are both carnivorous when it comes to their food requirements.

Although Camels Shrimps are carnivorous creatures in the wild, they serve as omnivorous animals as well in captivity. It is largely due to the fact that they pick up waste materials or debris near the bottom of the tank and feed on those.

Nevertheless, that is not to say that they should not receive adequate nutrition from plankton, pellets, or clams in order to enrich their body with essential nutrients.

They are also carnivorous, as they feed on soft coral, polyps, and other organisms of the same type.

On the other hand, Peppermint shrimp may also feed on the waste and debris that are present at the bottom of your aquarium.

Despite this, they are mostly carnivorous, so fish is a good choice for feeding them. You can also think of putting in Aiptasia anemones as these shrimps tend to feed on them.

Camel shrimps and Peppermint shrimps, on the other hand, breed using a different method. The following are the reasons why:

The female Camel shrimp produces eggs after six to twenty hours of mating, which she then keeps in her abdomen.

Peppermint shrimps on the other hand are hermaphroditic animals. The segregation therefore does not exist. As a result, you’ll find the reproductive organs of both sexes in the body of the same organism.

In the end, based on the social nature of both organisms, let’s look at the shrimp tank compatibility.

Due to the friendly nature of Camel shrimps, they can pretty much be kept with all kind of invertebrates and fish. You can choose to go for clownfishes or tangs, for example.

While Peppermint shrimps can get aggressive, they can still form good bonds with other aquatic organisms such as Tetras, Grunts, Dragonets, etc.

Can you have a Peppermint Shrimp with cleaner shrimp?

What are Peppermint Shrimp good for?

Probably the most well-known attribute of the Peppermint Shrimp is its ability to manage the aquarium of nuisance Aiptasia – glass anemones. Keep in mind that some Peppermint Shrimp are considered better at managing aiptasia than others, whereas others may not be much interested in aiptasia at all.

Camel shrimp in their wild habitats are carnivorous animals, whereas in captivity they are more of an omnivore. It is believed that this shrimp can eat corals as well as other kinds of polyps.

Despite the fact that they look very similar, Peppermint shrimps and Camel shrimps are two very different species of shrimp. Almost everything about them is different, from their origin in science to their habits to the way they breed. You have probably noticed this by now.