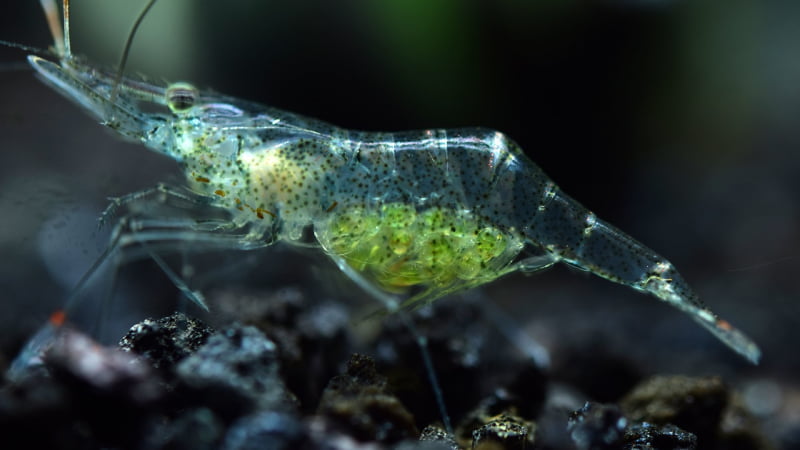 Marine Grass Shrimp are known for their amazing appearance, which is why they are sometimes called marine peacock shrimp. They have a variety of colors and patterns on their bodies, making them the perfect addition to any marine tank. But marine grass shrimp aren’t just pretty – they’re also really interesting creatures!

In this blog post, we will discuss 5 marine grass shrimp facts that you may not know about these fascinating creatures.

Glass shrimps are originally from North America and were first described in 1850.

‘Glass shrimp’ is the common name for a variety of shrimp, most popular of which is the Marine Glass Shrimp genus that belongs to the Palaemonetes family.

There are a number of different types of marine grass shrimp within the Palaemonetes genus, though most fish stores call them ghost shrimp without specifying.

Keeping a shrimp in an aquarium is a perfect addition to your aquatic life. These little scavengers usually spend their day cleaning up uneaten food and making sure the tank is algae-free. They are always active and working hard throughout the day, giving your tank that extra bit of polish it needs!

Marine grass shrimp are generally found free-swimming and cleaning themselves around the tank, though a group is not necessary.

Before purchasing shrimp, be sure to check for a feeder or home aquarium. Feeder fish are often mistreated and unlikely to live as long.

Marine grass shrimp are named such for their main means of protection. A large reason as to why these shrimp are popular in aquariums, aside from their clear and interesting appearance, is because this type of shrimp can be seen processing food inside its body that’s easy to view thanks to the transparency.

Different shrimp may have different colored dots on their backs and they will grow to roughly 1.5 inches, but females are larger than males.

Like most underwater organisms, marine grass shrimp have antennae that come in two pairs: long and short. The antennas are sensory organs for the detection of things like food or toxins in the water as well as playing a role in socializing.

The rostrum, a beak-like extension, lies at the front of the carapace. The hard outer shell protects the soft underside of its body from predators.

Underneath the carapace is six flexible abdominal segments. Inside these sections, you will find pairs of pleopods that serve as “swimming limbs”. The sixth abdominal segment connects to the tail, in the middle of which is a specialized segment known as the telson. Underneath the telson (tail) are four further segments labeled as uropods. With these four, this being the tail fan that is typically seen while moving, it embeds why they are called shrimp.

The lifespan of a Marine Glass shrimp varies depending on the individual and their place of origin.

As they are inexpensive and easy to maintain, shrimp are often used as feeder fish for larger species in the home aquarium. They tend to be kept in high densities with poor fil. This makes them die more frequently during transport and have a higher mortality rate. Many also die shortly after being added to their new tank, even if the tank is otherwise healthy.

Though they have a short lifespan, marine grass shrimp molt regularly as they grow and eat. When a shrimp shed its old shell, they are particularly vulnerable until their new one hardens. You should not worry about your ghost shrimp too much though; fish do not mean any harm. Crevices and plants in the tank will help them out as molting occurs so make sure you have both of those things when you set up your tank.

When you see a discarded shell (molted) on the sediment, it may be natural to panic at first and think that it is a dead shrimp. Actually, with a closer examination of its hollow interior, you should easily identify the molted shell as not belonging to a living shrimp.

Shells usually become food for other shrimp in the tank when they are shed. This makes them harmless to your aquarium inhabitants even if they’re left in there for a short while after they’ve been released.

Marine shrimp are usually classified as detritivores, feeding primarily on dead or decaying plant matter. However, they eat a variety of plants and animals, including detritus, phytoplankton, algae, and other small invertebrates. In tanks, shrimp help to keep the water clean and filter food leftovers. In a tank without enough food, it is necessary to supplement with plankton or fish pellets.

Grass shrimp are an excellent food source for many types of both freshwater and saltwater fish. Grass shrimp also have a socio-economic impact because they eat algae and seagrasses, which in turn promote the estuary’s ecology.

In captivity, grass shrimp have been reported to be cannibalistic and predatorial on small polychaetes, oligochaetes, and nematodes (marine creatures) in the wild.

It is essential to make sure that the food gets on the tank bottom and is not eaten by fish living in the middle water layer. Through their transparent bodies, you can easily see what they’ve eaten becomes digested.

In order to generate a successful breeding program, it is necessary to house a sufficient group of shrimp in one tank. Females carry the eggs under their tails and they can be identified by their small green dots. If interested in raising them, remove the female from the main aquarium with her eggs until hatching occurs.

Most marine shrimp will spawn during the warmer summer months. Females molt before they mate, and can be seen with a pouch of eggs through their bodies.

When the eggs hatch, these small shrimp go through a larval stage when they are called zoea. Just like young blue crabs, the larvae go through a series of stages (about 1 to 2 months) of development and maturation until they become adult marine grass shrimp.

Shedding the exoskeleton of a shrimp and replacing it with a new one happens when they grow up, eventually leading to an extremely hard outer shell.

Glass shrimp eggs are laid as spherical free-floating larva, not minute versions of their parents like other shrimp species. This poses a challenge in their raising.

After hatching, small larva requires powdered algae and must be in the water with sponges to protect them from predators. After about a week, they change their appearance to resemble miniature versions of their adult parents. Although further care is not needed once they undergo metamorphosis for a few days, after that they too will need shrimp food as well

In the first days of its life, a shrimp larva does not look like a shrimp. It is only slightly larger than a pea, and it swims with help from some flaps at the back of its tail.

When shrimp larvae first hatch, they will feed on infusorian and zooplankton. Therefore, you should use infusorians or other similar-sized food to feed the juveniles.

You may place leaves on the bottom of a tank in advance, allowing them to rot before they are eaten by microorganisms that will serve as food for juvenile shrimp. You can also put java moss into the tank, which is home to many microbes that the larvae can feed off once they have shed their skin.

How to determine the sex of marine grass shrimp?

Male marine grass shrimp can be distinguished by the bulge on their back and female shrimps can be distinguished by eggs under their abdomen which looks like shining green spots. These shrimps also have a distinctive morphology, with females being more robust than males.
One of the most recognizable features is shrimp size. Female shrimps are larger than males, and both females and males are roughly equal in height. The length of an adult glass shrimp female is about 2 inches, while the male is sometimes even smaller than 1.5 inches.

What is the origin of marine grass shrimp?

Grass Shrimp can be found throughout the western Atlantic Ocean and Gulf of Mexico. They are commonly found in salt marshes, seaweed, and eelgrass beds along the coast, mostly inhabiting New England’s shallow coastal waters from Cape Cod south.

What is the life history and behavior of marine grass shrimp?

Grass shrimp are the most common species of shrimp in New England. They can be found mainly along coastal salt marshes, seaweed beds, and eelgrass beds.
Grass shrimp have a well-developed set of senses, and they can easily maneuver in the water due to their impressive ability to swim. However, most often they are found crawling along the bottom. Like other crustaceans, grass shrimp can cast off legs and grow new ones as needed – just like how our skin grows back when they molt it off.
Grass shrimp have gills that are situated underneath their abdomen and breathe using a special organ near the mouth of the shrimp. Female grass shrimp carry eggs under them and move only at night when it is safer from predation. This makes them vulnerable to many fish and larger invertebrates in Rhode Island waters that feed on them during the day when they are.

What are common diseases with marine grass shrimp?

In colder water, shrimps are more likely to contract diseases. The pH range for a healthy life should be 6.5-8.0. However neutral tap water can also work as it is safe and easy to clean tanks with shrimps even when not heated.

Marine grass shrimp are scavengers that are an excellent addition to any freshwater aquarium. They will actively search for leftover food at all times, and their transparent bodies make them great for observing the inhabitants of your aquarium.

Therefore, I highly recommend you consider the marine grass shrimps for your aquarium. If you find it is a great option, welcome to my blog post. Hope it will be helpful and thanks for paying your attention to it.