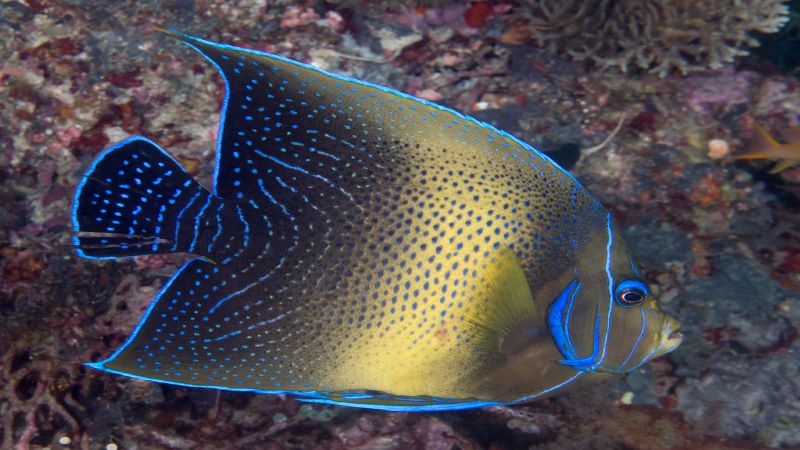 Angelfish are a popular freshwater fish species that are often kept as pets. They are known for their vibrant colors and beautiful fins. Angelfish come in wide different varieties, but the Koran Angelfish is one of the most popular. This type of Angelfish is native to Indonesia and can be found in lakes, rivers, and streams. It is a peaceful fish that is relatively easy to care for, making it a great option for beginner aquarium owners. Let’s scroll down and discover what you need to know about this pet!

Additionally, it is common in the Indian Ocean between South Africa, the Red Sea, Sri Lanka in the east, and Western Pacific from New Caledonia, Fiji, and Samoa to Japan in the west. The species lives in depths between 1-30 meters/3-50 feet and is a reef-associated species. Young fish tend to reside in shallow, protected environments, while adults prefer coastal reefs with abundant coral growth and hiding places. These fish tend to live alone or with a partner.

The largest Koran Angelfish that has ever been measured scientifically was nearly 40.0 cm / 15.7 inches in size.

In adults, the coloration on their bodies is yellow-green, fading from bright to dark as it moves from front to back.

During development, a blue-black coloration identifies juveniles of this species on top and bottom with a series of narrow white stripes that become increasingly curved as they approach the base of the tail. An observer can readily recognize these differences since, at first glance, there is no other fish in our pond that resembles it in any way!

As a general rule, Pomacanthus angelfish are not as tolerant of poor water quality as some other species of fish. Although the Koran Angel is less sensitive than some of the other species, it still requires clean water. This species requires a very large aquarium. It requires a large amount of food, which in turn creates a lot of bio-load, and a smaller aquarium will foul very quickly.

Depending on the water quality, Koran angelfish may develop infectious diseases, such as White Spot disease and Velvet disease, or parasitic infections from living rocks in the tank. You can read the detailed guideline here.

A stable and established tank with a minimum age of six months is crucial for the Koran Angelfish. An aquarium with a minimum capacity of 135 gallons (378 l) is recommended, and a minimum of 225 gallons (852 l) for adults of proper size and coloration and a pair.

As this angelfish likes to have hiding places, the tank should have plenty of rocks and corals arranged with enough hiding places. Set the temperature of the water between 72°F and 82°F, pH between 8.1 and 8.4, and SG between 1.023 and 1.025.

Koran Angelfish are omnivorous species that eat sponges, tunicates, and algae in their natural habitat. The organism also consumes corals, worms, crustaceans, and mollusks. Young fish eat algae and micro-organisms that live among them primarily for the majority of their diets.

Maintain a similar diet for your fish in the aquarium, which includes both meaty foods and an ample amount of algae and algae-based foods. You can serve seafood dishes containing live, fresh, and frozen shrimp, such as mysid shrimp and other crustaceans. The guests are sure to appreciate squids and freshly opened shellfish.

Also, the diet should contain a large number of algae, promote the growth of slime algae and cyanobacteria, and supplement with algae-based fish food and/or nori, kombu, and similar items from Asian grocery stores. It is preferable to consume spirulina and marine algae in one’s diet. In addition to zucchini, spinach, and green peas, this fish also loves to eat vegetables.

Finally, it is important to buy a high-quality angelfish preparation that contains sponge material. Koran Angelfish are grazing fish, so instead of just a few large meals per day, they should be fed several small ones throughout the day.

Koran or Semicirculatus Adult angelfish are usually solitary. They are semi-aggressive in the aquarium, but they may be a terrific community fish with the right tank mates, especially when young. They are hostile against smaller fish like gobies, clownfish, and blennies and should be maintained alone since they do not tolerate other angelfish.

They should be the final fish you add to the aquarium since they develop territories that they will protect. Larger angelfish may target slower-moving sharks and stingrays, particularly their eyes.

There are more than 30 meters / 100 feet of depth for this species of reef-associated fish. Typically, juvenile fish live in shallow, protected environments, whereas adult specimens live in coastal reefs with plenty of coral growth and hiding spots. Individuals or pairs live together.

A Koran Angelfish can’t tolerate other angelfish because they are highly territorial. If they are introduced too late in the life cycle of these fish, they can be aggressive toward smaller fish like gobies, clownfishes, and blennies.

Aquaria suffer from this problem since these creatures are aggressive and do not get along with gobies or clownfish. So make sure they have an aquarium big enough to fit all those beautiful angelfish if you want to keep several of them together!

The dance behavior of Koran angelfish before releasing their eggs makes them a popular aquarium fish.

The females extend all five of their fins while swimming beside their male companions. During this process, both sexes will release white clouds of sperm-filled gametes on the surface of the water near where the sperm would normally float while each male is releasing the gametes.

In general, the spawning process begins around sunset, followed by the release at midnight or earlier if there has been sufficient light for optimal fertilization rates (which can occur immediately after sunset).

The female Koran angelfish will scatter approximately 10,455 eggs, and the male will fertilize the eggs with his sperm. Within a short period of time, the fry will settle to the bottom and begin living a colorful existence.

The koran angelfish has a potential lifespan of over 21 years, even when kept in captivity.

Online and in stores, you can find the Koran Angelfish such as saltwaterfish.com, liveaquarium.com, etc. Depending on the size, they typically cost about $60-$150.

There is a distinct advantage to buying juvenile specimens in the aquarium trade that adult specimens do not possess.

Video: All About The Koran Angelfish

You should avoid keeping Koran angelfish in your reef tank. As well to nipping at stony or soft coral colonies toads, it also feeds on algae and invertebrates in the vegetation.

You can tell the difference between the two by looking at the white circle at the base of the tail of Emperor Angelfish, whereas the Koran has a c-shape.

Despite the Koran Angelfish’s size, good water requirements, and large tank size, it can be a challenging fish to take care of.

For tanks with a capacity greater than 250 gallons, moderate adult maintenance can be accomplished more easily. It’s also important to mention that foot traffic around the aquarium will stress them, which could lead to illness or lack of appetite, among other things.

The Koran Angelfish is a beautiful and popular species of saltwater aquarium fish. They are relatively moderate to care for but require a tank with plenty of live rock for grazing and hiding. As these fish can be aggressive towards other aquarium mates, they are not recommended for beginners. However, they can make a stunning addition to any aquarium with proper care.