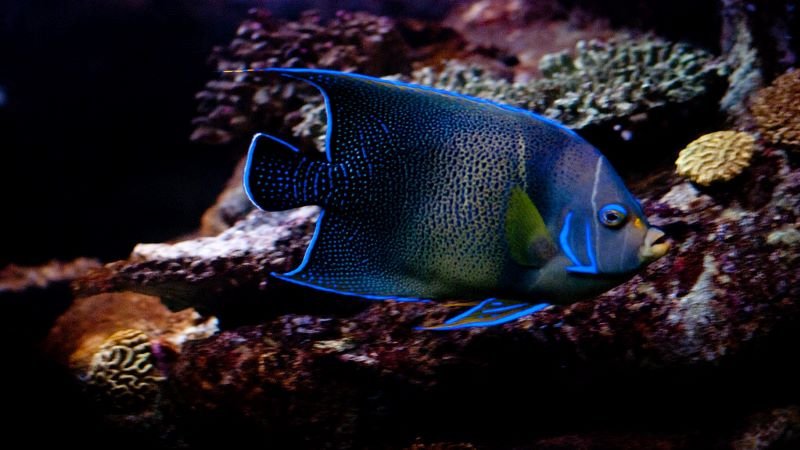 Koran Angelfish is a beautiful fish that can be a great addition to any aquarium. They are popular amongst hobbyists because of their vibrant colors and interesting behavior. However, they are sensitive to water parameters and can be quite difficult to take care of. This blog will go into the different aspects of Koran Angelfish care and provide tips on keeping them alive and happy in your aquarium.

Caring for a Koran Angelfish can be a rewarding experience. These beautiful fish are native to the Red Sea and are a popular choice for saltwater aquariums. If you’re thinking about adding a Koran Angelfish to your tank, this section is what you need to know about care and maintenance.

Anglerfish from the Pomacanthus genus are among the most sensitive species to water chemistry. Beginners or those with little experience keeping anemones in their aquariums will find them difficult to care for because they require certain temperatures and a more defined pH level than some other types of aquarium inhabitants.

The general recommendation is that if you plan to keep your reputation healthy, you should maintain 30% monthly changes (or 15% per week) each week.

Note: Remember to keep track of the tests you run on your water to determine when to replace your tank’s water.

Koran Angelfish is not as delicate as other Pomacanthus, but they still require a tranquil environment to avoid stress and sickness. Like other saltwater angelfish, they are susceptible to any illness that may be transmitted in a confined saltwater environment. The most frequent illness is saltwater ich, also known as White Spot Disease (Crypt), mostly found in marine tangs and angelfish.

White Spot Illness The most prevalent disease that affects marine tangs and angelfish is Cryptocaryon irritans, often known as Marine Ich, Saltwater Ich, or Crypt. Constant scratching, culminating in a slew of white dots, is one of the symptoms of Marine Ick. These dots vanish for a few days before reappearing with double the number. As a result of the parasites obstructing the gills’ ability to provide oxygen, the fish suffocates.

There is also Velvet Disease, also called Marine Velvet, caused by a parasite called Oodinium ocellatum (syn: Amyloodinium ocellatum or Branchiophilus Maris), which attacks skin flagellates. This disease causes a peppery coating that gives a yellow to light brown “dust” on the body, clamped fins, breathing difficulties (as seen in frequent or quick gill movements), clouded eyes, and glancing off the decor.

Keeping marine fish in the presence of live rock or any type of reef environment can make it extremely challenging to treat parasites. The treatment usually uses copper and formalin solutions and quinine-based drugs, which are toxic to other marine creatures. Nevertheless, metronidazole offers a safe, effective treatment for many protozoa and anaerobic bacterial diseases.

The effects of metronidazole are achieved by stopping bacteria and protozoa from growing. Metronidazole is an anti-protozoal antibiotic used to combat anaerobic bacteria. Drugs are added to fish food or the water to prevent coral bleaching. In addition to Seachem Metronidazole, Seachem AquaZole, Thomas Laboratories’ Fish Zole, and National Fish Pharmaceuticals’ Metro-Pro, many other products contain metronidazole.

As a protective measure against external parasites, you can slowly raise the tank’s temperature to at least 82°F (28°C). Consequently, the parasite will be prevented from completing its life cycle, including attaching to fish. The combination of high temperatures and medicated food provides relief sooner than later.

When taken in conjunction with another Seachem product called Focus, a bonding agent, the Seachem Metronidazole works well. A reef aquarium can use this treatment as the medication is bound to the food, which is not harmful to corals even if they eat it. Combine the Focus and Metronidazole in a 5:1 ratio (5 parts Focus and 1 part Metro), then mix this mixture with one tablespoon of food. Feed the fish with the medicated food three times per day for at least a week or until symptoms disappear.

Is Koran Angelfish Hard To Take Care Of?

Koran angelfish are not particularly difficult to care for, but they have some specific requirements that need to be met to thrive. They are reef-dwelling fish, so they need plenty of live rock and coral in their tank for grazing. They also need a diet rich in marine algae and small invertebrates.

Because they are slow-moving fish, they are often outcompeted for food, so it is important to make sure they are getting enough to eat. Koran angelfish can also be aggressive towards other tank mates, so it is important to carefully choose companions for them. Koran angelfish can be a beautiful and rewarding addition to a saltwater aquarium with proper care.

The Koran Angelfish is a unique fish that can be challenging to care for. These fish require a high-quality aquarium with a lot of space, and they are very sensitive to water quality and temperature. This fish requires a large aquarium, a special diet, deep sand beds, and a unique bubbler system. If you can keep the Koran Angelfish, you will enjoy their personality and exotic look!