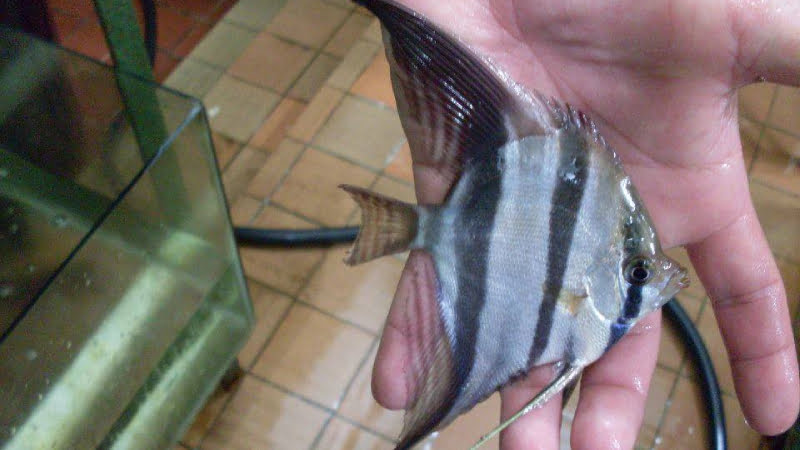 The Altum angelfish belongs to a very special class of fish in freshwater. Obtaining it is not very easy, and keeping it is even more difficult. Even so, its allure remains undeniable, and it is still the most sought-after of all the freshwater angels.

Many people have asked me where they can buy Altum angelfish. That question definitely piqued my interest. That’s why I will point out some notes, risks when buying Altum angelfish, and where you can find the real, legit, true Altum angelfish in this article.

I must draw attention to the fact that Altum angelfish are seldom bred in captivity. Most of the Altum Angelfish sold in the trade are actually wild-caught rather than bred. The availability of captive-bred Altums is limited, and they are more expensive than their wild counterparts of comparable size.

As a result of the annual schedule of fishery closures in the countries from which the Altiguan Angelfish are native, there is a fair amount of seasonality when it comes to the availability of this wild fish. I think of the season for Altum Angelfish as mid-summer into the fall.

There is no easy way to get Altums out of season. There is a wide variety of prices for Altum angelfish depending on their size, season, and mortality rate. Yes, Altum angelfish is considered a difficult fish to import and establish in captivity.

In general, finding Altum angelfish in the U.S. feels like running after a ghost. Generally speaking, they aren’t readily available through traditional channels. From my experience, if you simply order them from a list, you are more than likely to get something OTHER than P. Altum. For example, Peruvian Altum angelfish are not true Altum angelfish. Because of this, placing a special order through a local fish shop is risky for you and the shop.

There’s a chance you might be fortunate enough to find an aquarium shop that sells them locally, but this is extremely rare. Even when you did discover shops selling real, true Altum angelfish, they would always be out of stock before you could even get to them, as well as the quality seemed to be hit or miss.

As it is truly rare to catch an Altum angelfish for sale at local stores, many people were forced to resort to online sources. This can be incredibly risky, especially in the case of the Altum angelfish. In fact, my worst experience with online fish shopping involved procuring Altum angelfish. Here are some risks you have to face:

The Fish Was Different From What You Expected

One risk that we may encounter, no matter what goods are purchased online, is that the goods are wrong.

You may not be able to see the actual fish you want to purchase. Therefore, the size, color, and pattern of the fish you receive may be different from the image provided by the seller. You can also not check the real health status of the fish.

It Is Not True Altum Angelfish

This risk is much worse than the first risk. You pay your money to get a true Altum angelfish. However, what you receive is wrong Altum angelfish as you can not directly check any characteristic of the fish you buy thoroughly.

Death Risks From The Shipping Process

Many aquarists bought Altum angelfish online and have reported that their fish died after a few days. Yeah, I could say it may be the fault of the vendors, shippers, or you.

As it is the biggest risk, I advise you to read it carefully even though it’s quite long.

Do you know that Colombia is where nearly all the true Altum angels in the trade are exported from? So by the time these wild-caught fish are shipped to other countries, such as Europe, Asia, or North America. They have already gone through pH changes, temperature changes, etc. They are highly stressed out. They have not been acclimated to different conditions.

So when these fish arrived in aquatic stores in our countries. They are already in a horrible condition. But most of the aquatic stores don’t really care about it. They don’t have people knowledgeable enough to do that, so they will just add this fish straight to the display tanks and ready for sale.

In that case, you will be paying quite a lot of money for Altum angelfish, which is not likely to survive because this fish has not been treated properly or acclimated properly. They will most likely die within a few days.

But sometime, the reasons may be from you. You are not getting ready for Altum angelfish. When you got your fish and introduced into a different set of conditions. Maybe slightly different from your aquatic stores’ conditions. So that’s another level of stress within just a short time. They went through so many levels of stress, and that’s why they don’t make it through the shipment, and that’s why they will die in your tank really fast.

This section comes to a note:

While it is true that the actual Altums were “expensive” in comparison to the average domestic angelfish, in reality, there was a significant amount of additional investment in what amounted to bad purchases and wrong fish, fish are prone to death after the shipping process.

You need to have a certain amount of risk tolerance to pursue Altum angelfish. You also need to be willing to take the financial risk involved.

Where To Buy Altum Angelfish?

When I talk about importers/vendors here, I could probably name just two vendors who would properly acclimate the fish or adapt it to different work conditions when importing the Altum angelfish. Most other importers that I am aware of will never do that.

After asking around and experiencing it myself, I would suggest trying Houston Aquarium Warehouse or tangledupincichlids.com run by Jeff Rapps.

Are Altum angelfish hard to keep?

The Altum angelfish is not hardy like other tropical angelfish species. They are very fragile, and they should be kept in a strict aquarium environment. Because they do not like to be disturbed and are very sensitive to the level of nitrates in the water, they require a very strict filtration system with weekly water changes to ensure they do not suffer any harm.

What is Altum angelfish price?

If you want to purchase these fish, then be aware that they can be quite expensive, especially compared to the regular angelfish. Any price between 20$ and 50$ is considered to be a normal price depending on the size of the Altum Angelfish. And because it is very difficult to catch this fish in any local stores, you may have to pay much more money than that to get it.
You need to ensure that you are purchasing true Altum angelfish and not regular angelfish. At times, fish are mistakenly sold as other types of angelfish.

How do you introduce new angelfish?

You need to be careful when introducing new angelfish to your tank. When you bring an angelfish home, start by placing it in a quarantine tank. You have to let the bag float in the tank for about 20 minutes, and then open it and add tank water to it one cup at a time.