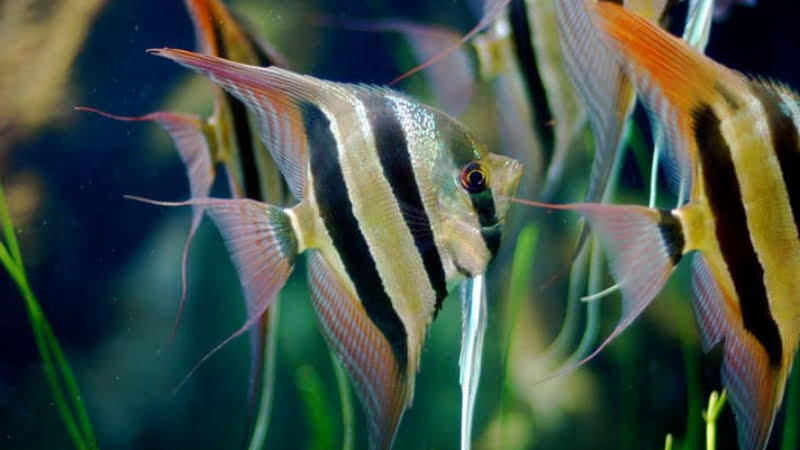 The Pterophyllum genus (angelfish) is a widespread genus in South America, resulting in confusion when distinguishing between many species within the genus in the wild. Currently, there are three different classified kinds of angelfish: Pterophyllum scalare, Pterophyllum altum, and Pterophyllum leopoldi.

Pterophyllum Altum or Altum angelfish is the largest representative of the Pterophyllum genus. In this article, we will find out all about the Altum angelfish. That includes where it inhabits, how to keep it, feed it, breed it, etc.

These fish are also known by the names Orinoco Angelfish, Altum Angelfish, and Deep Angelfish.

In the wild, these fish inhabit river watersheds and flood plains with moderate water flow, submerged trees and roots, and underwater vegetation. This kind of fish is most commonly found in very soft, well-oxygenated waters. These omnivores eat small fish and invertebrates as well as other food particles in the water.

As I have already mentioned above, Altum angelfish is the largest representation among the three Pterophyllum species.

In the world of tropical fish, angelfish are considered to be among the most popular, and beginning aquarists will look to get started with them. The Altum Angelfish, however, is a fish that is extremely challenging to maintain and is not the best choice for people who are just starting out. The species of the family have a high risk of holes in the head disease, have difficulties dealing with nitrates, and are more prone to stress-related diseases as well. Furthermore, they are also very sensitive to the condition of the water, need very soft and acidic water, and can be quite difficult to feed.

For the altum angelfish living in an aquarium tank, their lifespan varies from 5 to 8 years. The females usually live about 6-12 months longer than their male counterparts. In this respect, the tank water temperature plays a crucial role. The higher the temperature, the faster the fish’s metabolic processes are, which results in decreasing lifespan correspondingly.

For a single fish, a 55-gallon aquarium is sufficient, but a larger tank is needed if there are going to be more fish. Water movement as well as the need for a very strong and efficient filtration is also necessary for fish. Considering that they come from a natural environment with well-oxygenated and soft water, it is recommended to use peat-filtered water.

Altum angels’ tanks must be equipped with plant roots and rock formations for them to hide in.

As for the substratum, there is no specific specification on it. This means that any substratum will be fine to use since the Altum angels are mid-level dwellers, mainly hiding and vegetation.

Additionally, a lighting system should be installed on the roof of the aquarium in order to provide a toned downlight.

To successfully maintain an altum angelfish, high quality water in the tank is essential. The water in their natural habitats is very soft. They are kept in a tank with water of middle hardness because it is easier to maintain their basic hydrochemical parameters in this case due to their small volume.

You should follow these parameters for the tank water:

Atlum Angels require a strict water change schedule that includes at least 25% every week. Make sure to test any water that is going back into the tank, as the Angel is very sensitive to water fluctuations. If you perform water changes, make sure that you vacuum the substrate thoroughly after each change. Whenever the tank is cleaned, and water is changed, take great care so as not to cause unnecessary or excessive stress to the fish, as they are prone to stress-related diseases.

The Altum angelfish are generally considered a ‘community fish” but as the fish grow older, they may become a bit territorial. The Altum angelfish are more peaceful than other angelfish species. Because they belong to the cichlid family, smaller fish may not be compatible with them. After maturing, males and females will pair off and develop a strong nuclear family and then defend a territory for breeding. There is one nice thing about the Altum Angelfish is that they do not burrow or disturb the plants in the tank.

Tetra and Corydoras species mentioned above are all schooling fishes, so you should keep them together in a tank with at least ten species. Each species must pass a 4-week health test. For bottom-dwelling fishes, the requirement is the same.

Altum should not be kept with small fish, like oto catfish or bristlenose pleco juveniles. Although these algae-eating creatures are rather welcome in aquariums, their small size sooner or later causes them to be treated as the prey of altum.

Generally, Altum Angelfish will eat a wide variety of living, fresh, or flake foods, as they are omnivorous fish. If you want to maintain a balanced diet for your fish, you have to give them flakes or pellets of high quality every day. Feed brine shrimp (living or frozen) or blood worms for a treat. Spinach and lettuce are also great treats. You will have to feed mosquito larvae very sparingly if you don’t want them overeaten. Overeating can result in the buildup of fats in the body, which results in inactivity and could even result in death.

Altum angelfish have been caught from the wild and introduced into the aquarium trade business for years. It was not clear how to get the fish to breed in captivity. It’s just been a while since they’ve been bred in captivity.

It is recommended to breed the Altum angelfish with Scalare as they are closely related to one another, and it is very easy to breed these two angelfish. The resulting hybrid fish species is known as the Orinoco Altum fish.

To breed these fish, they are first paired together. When it comes to pairing them up, you need to place a couple of Altum angels or a group of them together and then wait until they are paired up with one another.

They are then fertilized by the male. But there’s another issue here. Eggs can be eaten by their parents. When not eaten, the eggs will hatch within a few days. After hatching, you should remove the larvae from the tank if you wish to raise them.

Video About How To Keep Altum Angelfish

What is the difference between Altum and Scalare angelfish?

Are Altum angelfish hard to keep?

How to define Altum angelfish’s gender?

Only during the fish’s spawning period can you define the fish’s gender. All secondary characteristics do not provide a certain indicator of fish gender if you don’t identify the gender at that time.
Male species tend to be a bit larger and have a taller body and a sharp forehead than female species. They are also more contrast-colored. Nevertheless, all of these traits are quite relative and strongly depend on the tank’s conditions.