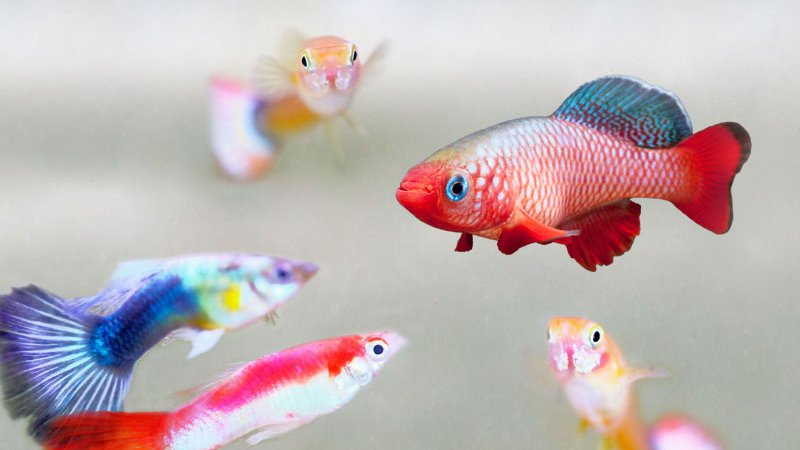 Killifish and guppies are both very pretty fish that definitely add stunning beauty to your aquarium tank. Many people love both of them equally and want to mix killifish with guppies in the same tank. Is it possible?

In the case of guppies, as you already know, they are pretty friendly fish that can get along with practically any other type of species. Killifish, however, are quite different. Killifish and guppies exhibit some differences that could make it difficult for them to coexist peacefully.

That’s why I thought it would make a good article to discuss killifish and guppies and assess whether these species would make good tankmates or not.

The answer to that question will be a definite no right from the start. If you intend to keep Killifish with Guppies, it is not a good idea. In actuality, there are several differences between the two breeds, even those that are not related to physical appearance. That makes them incompatible tank mates for each other.

Why Guppies Are Not Good Tank Mates For Killifish?

Below are some differences between killifish and guppies that are reasons why I assume they are not compatible.

First of all, Killifish and guppies have different diets. Guppies are tropical fish, and they have omnivorous diets. To stay healthy and thrive in the long run, their diet should include a mix of meaty foods, live foods, vegetables, and algae.

However, killifish have a carnivorous diet. Killis aren’t actually particularly aggressive, but as carnivores, they are willing to eat anything that they can fit in their mouths. As a result, it can be disastrous if you mix killifish with a friendly and peaceful breed of fish such as guppies. Some cases have even been known to have occurred where a killifish has managed to kill guppies twice their size and consume them.

The Killifish is an extremely diverse species of fish, each of which has its unique specifics. The killifish can grow from 1 to 4 inches wide, whereas most guppies can only reach 2.5 inches. The result will be that guppies will quickly be transformed into potential meals for carnivorous species of fish that are twice their size.

Guppies males have territorial behavior. But that behavior is limited and shown if your tank is relatively overcrowded. It is not the same when it comes to killifish. In general, male killifish tend to be extremely territorial and aggressive, which will spike the intensity tenfold compared to the guppies. They show territorial behavior not only toward one another but also toward other fish species. Having both guppies and killifish in the same tank can quickly lead to disaster.

The standard recommendation for guppies is that they should be housed in tanks where there is one fish per two gallons of water. You should not keep more than ten guppies in a 20-gallon tank. However, killifish have different requirements. In their case, you should ideally only keep one pair in a 20-gallon tank. You should at least get a 40-gallon or 50-gallon tank, so you can prevent overcrowding and lower the risk of aggression if you plan on adding guppies.

How To Mix Killifish With Guppies In The Same Tank?

Although keeping Killifish with Guppies is not recommended, many people still have mixed them in the same tank. So, if you love and want to keep both of them, read these precautionary measures thoroughly to keep them together successfully with minimal fallout:

Provide them with enough room

As I’ve mentioned previously, a killifish requires a minimum of 10 gallons of water. Generally, guppies require less water volume, which means that when you are choosing a tank, you should mainly consider the specifications of your killifish, rather than the guppies. If you can allow both species enough room, you can minimize the aggression from the killifish.

Control the number of killifish males

There is greater aggressiveness and territoriality in male killifish than in females. So if you want to keep killifish with guppies or any other fish, the best idea is to choose a female killifish. This will create a more stable environment in your tank for a prolonged time.

Ensure your killifish is getting an adequate diet

The killifish is a carnivore that prefers to consume arthropods, worms, and insects as part of its diet. If you provide the fish with adequate food, the fish will be less likely to kill guppies. If possible, the killifish should be fed separately from the guppies, and adequate live food should be provided daily.

Select a species of killifish carefully

The number of killifish species you can choose from is somewhere between 1,270, with each having its characteristics and temperament. There will be more aggressive and territorial species than others, and species that are bigger than others. Your best bet is to choose a killifish that is similar in conformation to guppies. The ideal species of killifish to use is one that is smaller and has a more pleasant temperament, which will reduce aggression and stabilize the tank dynamics.

It doesn’t always happen, but sometimes it does. It is all up to a variety of factors, including how much bigger the fish are, how aggressive they are, the tank conditions, etc. If you have a killifish that is the same size as your guppies, then it will be less likely that it will attack them. This is certainly not to say it can’t happen, especially if the killifish is not fed enough.

However, the answer will be entirely different when it comes to guppy fries. It is likely that the fry of your killifish will be consumed by the fish as soon as they are born. To keep the fries from surviving, you should move the pregnant female guppy into a different tank once she begins to give birth.

You do not have to worry about your guppies eating killifish since they are very unlikely to do so. In normal situations, guppies will attack only smaller fish species, but killifish are larger or of similar size to guppies. While guppies aren’t predators, they’ll eat fry killifish. During their first week of life, the fries are quite small and pretty defenseless.

Guppies normally don’t show predatory behavior towards other fish species, and this is mainly due to the fact that they are omnivorous. They have no interest in other fish species; they just care about having enough food throughout the day.

Video About Guppies and Killifish

Do killifish eat other fish?

If the fish are small enough, Killifish will readily eat their tank mates. Tetras, Guppies, and nano Killies are small and easily become prey for the Killifish. However, any fish over the length of two inches will be safe from the Killifish.

How many killifish can you keep together?

If you are setting up species tanks, a 5 to 10 gallon tank can house one to three killifish. But for community setups or if you intend to keep more than one male Killifish, a 20-gallon or larger aquarium is recommended.

It is usually reported that killifish are peaceful and passive pets, but depending on their environment, they can become aggressive and territorial. The most common type of aggressive behavior among male killifish is for them to act aggressively when they are in close proximity to other male killifish.

Can killifish live with other fish?

The answer is “yes,” but barely. Some killifish species are more aggressive than others, which makes it difficult for them to live peacefully with other species. When choosing tank mates for Killifish, you should choose a more peaceful species that show less aggression and territorial behavior than Killifish.

Killifish and Guppies are both beautiful fish, but they are not compatible living with each other as they differ in diets, size, temperaments, and tank requirements.

If you insist on mixing these two species, there are several precautionary measures that you have to take. By doing so, you can reduce the likelihood of territorial displays and aggression in the long run.