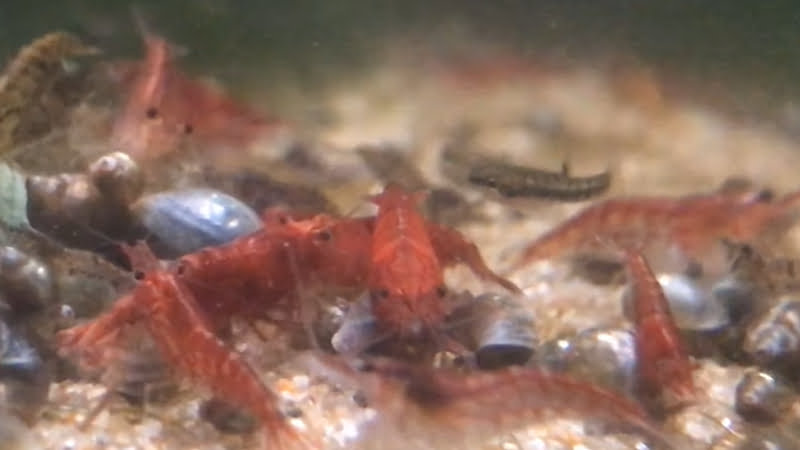 Is it safe to keep least killifish with shrimp? Aquarists love having different species in the same aquarium for a better aesthetic. But these are very different creatures with distinctive behavior, so many wonder if they can live together in peace. Quick answer: it’s possible, but you have to take into account the size and types of killifish and shrimps. I will elaborate further right now!

There are 4 things about least killifish that I want to comment about: their size, lifespan, ideal tank mates, and behavior.

There are tons of different killifish breeds, each has distinct characteristics. The size of the killifish ranges anywhere from 1 to 6 inches in length. As for least killifish, this is one of the smallest breeds that only grow up to 1.2-1.5 inch. It’s impossible or nearly impossible to encounter one bigger than that, even 1.5-inches killies are hard to find.

Least killfish can live around 3 to 4 years, some even reach a 5-year lifespan, though it’s not common. If the living conditions are off, one may survive 1-3 months only.

Killies are quite a peaceful aquarium fish specie. And given that they aren’t big in size, avoid picking aggressive tank mates that are larger than them, like angelfish, swordtails, or bettas. Their environment requirements are different and they belong to different fish families, which will end up in a severe population control situation within the tank.

Male killifish are extremely aggressive and territorial. They display territorial behavior not only towards each other but also with other species of fish. Females are much less hostile.

Shrimps are constantly in search of food. If they are really hungry then they will take a break for a while but then, after a resting time, they go back to eating and moving. Some of the most common aquarium shrimps are cherry, ghost, and bamboo shrimps, among other breeds. Cherry shrimps are typically peaceful, but this is not the case for many other types. Ghost and Amano also are good options for a tranquil tank.

Should I Keep Least Killifish With Shrimp?

From my experience and according to the characteristics of these species, I don’t recommend keeping killifish and shrimps together, especially when you have unique aquarium shrimps like cherry, ghost or crystal shrimps that you want to keep alive instead of making them killifish’ food.

Nevertheless, it’s still possible to keep least killfish with shrimps, given that this breed grows up to 1.2 inch only and doesn’t pick a fight with those bigger than them. For breeds like gulf killifish or Gardner’s killi, I don’t recommend keeping them with shrimps since they can grow up to 5-6 inches and are true predators for the crustaceans.

Where can I find least killifish for sale?

Killifish eggs are hard to get, so purchasing fries or adult ones is a better idea. You can get them from AQUABID, EBAY, or LRB AQUATICS – AQUARIUM HOARDER. They sell a good variety of kill fish so users have more options.

Yes, most killifish eat shrimps and don’t have trouble consuming these crustaceans, especially brine shrimps. However, there are breeds of shrimps and killifish that can cohabitate. In general, if there isn’t a big difference in size between the 2 species, they should be able to share the tank.