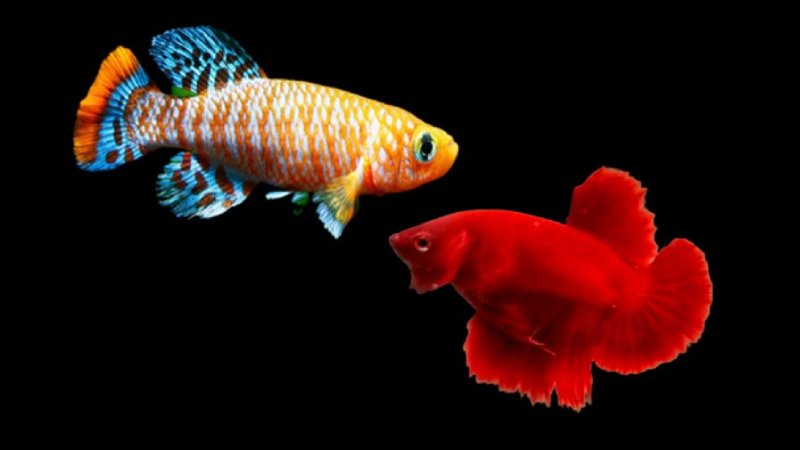 Killifish are very pretty freshwater fish. This fish is so attractive because it is not only diverse in color but also peaceful. However, killifish is not very popular in aquarium husbandry and you will rarely find them available in pet shops.

On the other hand, Betta fish are one of the most popular freshwater fish for pets, and you can find them in almost every pet shop. It is due to the fact that they come in a variety of colors, patterns, and tail variations that they are loved by so many people.

Can we house Killifish with Betta together in the same aquarium tank? Let’s find out the answer in this article. Also, I will help you find compatible tank mates for your Killifish if you want to keep Killifish company.

The majority of Killifish are known for having a peaceful temperament. Considering this characteristic, they are ideally suited for tanks with other types of calmer tropical fish, such as neon tetras.

However, they sometimes show aggression. One noticeable difference between Killies and their female counterparts is that male Killies may be aggressive towards other male Killifish when paired in the same aquarium. That said, female killifish tend to get along with others in a community tank. To prevent male killifish from showing aggression in your tank, if you intend to feed them with other fish, be sure to provide lots of hideouts for the bullied male to hide from their tormentors.

For first-time owners, it is recommended that you start by keeping just one male so that you can get familiar with the care requirements of this fish. Keeping 2 male Killifish may be more complicated. However, if you keep only females, you can keep more than one in the same tank as long as there’s enough room to do so.

Depending on the species of killifish, some may show more aggression than others. For example, the Blue Gularis and the Golden Wonder are two popular species, but they do have the tendency to be fairly aggressive compared to other Killifish.

One impressive ability of Killifish is that they can jump high. Some people have reported that they saw the killifish jump out when they lifted the lid. You’ll definitely want to keep an eye out for this since they are able to take you by surprise.

What Makes A Good Tank Mate For Killifish?

Killifish are schooling fish that are quite peaceful except when they are in the company of other male Killifish. These fish do very well when they are mixed with other small fish species, which are also calm and have similar requirements regarding water parameters.

In the wild, Killifish are naturally schooling fish. Thus, it is important to keep them in a group for the sake of their health and wellbeing. It is easy for them to become stressed if they are left alone.

If you want to start a killifish company, here are some recommended Killifish tank mates:

It’s also important to remember that it’s not recommended to keep two or more male Killies because they can be aggressive towards each other. You should also avoid any species that looks very similar to the male version of the Killifish. Killifish is not suitable for housing with larger, more aggressive fish like Angelfish and Barbs.

Moreover, it is advisable to avoid smaller fish (like fry) as well, since they will be viewed as prey by Killifish.

Invertebrates like Shrimp and Snails should also not be kept in the same tank with Killies if you don’t want to see them become an expensive, tasty snack for killifish. Not only for that reason but also due to the soft water conditions, their calcium carbonate shells will erode as a result.

Can We Keep Killifish With Betta Together?

No, keeping killifish and bettas is a bad idea. If the killifish and the bettas are kept in the same tank together, they may get aggressive.

If you have Killifish eggs and fry in your tank, then there is a chance that they could become a tasty snack for bettas.

There is a possibility that the presence of your killifish could stress your Bettas, as they are highly territorial. Ideally, the two should be kept in separate tanks with more compatible tank mates.

Video About The Killifish And Betta

When Clown killifish are young, they tend to school together and swim beautifully around their aquarium. A clown killifish adult doesn’t care about schooling and often just picks one part of the tank. However, It is ideal to keep a few together as they don’t like being alone.

Do killifish get along with guppies?

While some breeds of killifish can live with guppies in relative peace, others are completely incompatible. If you insist on trying your luck with mixing the two species, at least look for a smaller, less aggressive breed of killifish. This will minimize the chance of aggression and territorial display in the long run.Nov 10, 2021

Can we keep the killies together?

Yes, your Killifish will thrive when you keep some of them together. I recommend you to keep at least 3 of them together (2 females and 1 male). If you have larger tanks that are 30+ gallons, you can keep up to 12 killies.
In larger tanks (30+ gallon tanks) you can keep up to 12 individuals and they will school together. The large tank is also mandatory if you intend to keep male killifish together because they will have plenty of room to hide if necessary.

Killifish aren’t the most well-known aquarium fish, but I think we need to start talking about them more! This is because they are easygoing fish with many different color options for you to choose from. In a tank with any other similar-sized and peaceful fish, you will find them to be the perfect mates.

Killifish with Betta are not a good combination. But they have a lot of other compatible tank mates. I hope that, after reading this article, you will find the answer.