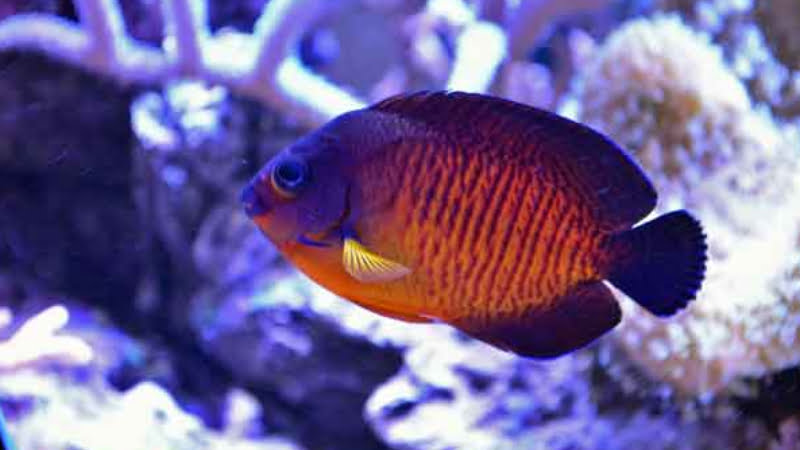 Many aquarists are attracted to the saltwater aquarium hobby because of the colorful creatures that live in the ocean. The coral beauty angelfish is no exception to this rule: this little species makes up for its diminutive stature with a stunning array of colors.

Continue reading to learn all the information you need in order to provide proper care for your home dwarf coral beauty angelfish.

In 1860, Gunther described the Coral Beauty Centropyge bispinosa, which is often referred to as the Coral Beauty. This angelfish belongs to the family Pomacanthidae, of the genus Centropyge, which has more than 33 species. This dwarf angelfish is classified as Least Concern (LC) by the IUCN due to its large population and wide range. Despite their harvest for the pet industry, there are no major threats at the moment.

In addition to the Tuamoto Islands, it can be found from East Africa to the Izu Islands, as well as the Lord Howe Islands near Australia. It is a fact that they cannot be found in Hawaii, the Red Sea, or the southern Pacific Ocean. The Coral Beauty Angelfish is also known as the Two-spined Angelfish, Dusky Angelfish, and Twospined Angelfish.

The Coral Beauty Angelfish looks like most dwarf angels. It has a small body that is long and oval-shaped, and its fins are round. These angels can get as big as 4 inches (10 cm).

Most of the time, these dwarf angelfish are red or orange with thin vertical lines of dark blue. The head, face, and fins are all a purple-blue color, and there is an orange-red spot with blue edges at the base of the pectoral fin.

Nevertheless, the colors and patterns of different specimens can be different depending on where they were found in the wild. They can be almost all purple or a little less purple. The center body can have a lot or a little reddish-orange, orange, or orange-yellow color, and the stripes can turn into broken lines of dots and dashes. Dwarf coral beauty, which lives in deeper places, will be paler. The color of the Philippine variety is a beautiful blue-red.

You can keep a coral beauty angelfish as a pet for a long time, but not as long as it would live in the wild. In the wild, it can live for 10 to 15 years.

But the information from different aquarists shows that it is very unlikely that they would live as long as they would in the wild.

But if you keep the tank in good condition, you can still enjoy their company for a long time.

Males are usually bigger than females, but the color doesn’t always tell you which is which. These fish, like all Centropyge, are born as females. As they grow up together, the biggest and strongest fish will turn into males, while the others will stay females. In the event that the dominant male passes away, the next dominant female in the hierarchy will transition into a male. The best way to get a pair is to put a bigger fish with a smaller one. This could happen in about two months.

There have been reports of the Coral Beauty behaving in a semi-aggressive manner against other fish. As opposed to other dwarf fishes, it is not aggressive towards smaller tank mates except when competing for algae in smaller tanks. These fish may be stressed out even in a 55-gallon tank if there are other algae eaters around.

Two males of the Coral Beauty species will engage in a battle to the death. Only in tanks exceeding 100 gallons with enough hiding places can they co-exist peacefully with other dwarf angels, and there also must be plenty of food. Making two different “reefs” in a larger tank helps to “split the line,” so to speak. The Dwarf Coral Beauty Angelfish is the least likely of all dwarf angels to harm coral when kept in bigger aquariums.

As an omnivore, Dwarf Coral Beauty Angelfish eat a variety of things. In nature, it predominantly eats algae, but it will also eat small creatures that live in the algae. While in captivity, their diet consists mostly of algae and a small amount of additional protein.

Feeding your fish a wide range of healthy meals is essential. Spirulinaenriched meals, Mysis shrimp, and other high-quality meaty feeds such as angelfish preparations and flakes or pellets specialized for algae-eating fish should be provided. Formula II and Angel Formula are two of the best commercial meals on the market. When natural foods are available, feeding your pet several times a day is recommended.

The Coral Beauty Dwarf Angelfish is one of the simplest to keep among all Dwarf Angel species. The most important thing to keep in mind is territoriality. If you’re just going to retain the one, you shouldn’t have too many problems!

The Coral Beauties are a solidly average Pygmy Angelfish species in comparison to other dwarf angelfish species. Fully grown, they are 3-4 inches long and can be kept in 40-liter breeder aquariums. Despite having a moderate volume, the footprint of a 40 breeder enhances its carrying capacity.

However, it’s best to keep these fish in a 55-75-gallon tank, since they’re quite active. Besides, a minimum of 80 gallons of tank capacity is required for keeping more than one, since they may become territorial and engage in bloody battles for dominance.

The Coral Beauty is one of the easiest Angelfish for beginners to care for, which is saying a lot since most Angelfish are sensitive. An Angelfish should never be the aquarium’s first fish (because of New Tank Syndrome). However, in comparison to their relatives, they have a far higher tolerance for ammonia, nitrite, and nitrate.

In spite of this, you shouldn’t skimp on water changes, particularly if your Coral Beauty was just imported and is already stressed out by the rigors of travel. As soon as you’ve gotten it used to its new environment, it will be a long-lasting source of amusement in your aquarium. You should thus strive for a nitrite/nitrate/ammonia level of zero for all of your fish.

Coral Beauties do not have any particular res; the optimal water temperature for the majority of reef fish is between 72 and 78 degrees Fahrenheit, and the ideal specific gravity (salinity) range is between 1.020 and 1.025.

When it comes to currents, dwarf coral beauty angelfish have no strong preferences. It is important to avoid providing currents that are excessively powerful since they have a tendency to graze while hugging the living rock. They likewise spend most of their time in the bottom of the tank, only sometimes rising to the middle. Low to moderate currents are excellent for them.

Besides food, Live Rock offers lots of hiding spots for these creatures. As the result, the fish are provided with a feeling of relaxation and security.

In a large tank with several living rock formations, the coral angelfish is less prone to nibble on the corals. Consequently, if your tank is big enough, a reef aquarium may be an option for you. In a communal tank, it is best to introduce these fishes lastly.

Mid-level inhabitants, angelfish spend much of their time in and among the rocks and crevices of their habitat. Hence, there are no restrictions on substrate choice when raising coral beauty. However, the substrate that is made up of stones would be something that the fish would really like.

The live rocks in a coral beauty angelfish tank need light energy to grow algae, thus a lighting source is required. For fish that are going to be bred, the gentle blue light is ideal.

The filtration setup would purify the water in the tank and perform all three of the necessary filtering tasks.

For the most part, Coral Beauties are friendly with non-Angelfish. However, they may be a little bit hostile towards their tank mates if they see a delicious patch of algae they want to take for themselves. Because of their temperament, they make excellent pets for a variety of fish, from the semi-aggressive to the aggressive.

This species of coral has been described as staying close to the reef rather than going to the top. Nevertheless, most of them rise into the water column and simultaneously release eggs and sperm while they are at the top.

As a general rule, the majority of dwarf angelfish do best in a deeper tank, and they also need an appropriate lighting schedule in order to successfully reproduce. It is important to replicate the natural dusk light cycle in your aquarium at the same time every day. To do this, first, have half of the lights go out(the brighter lights). Then, about 1 hour later,  let the other half of the lights (the actinics) go out.

The eggs will hatch in just less than a day, and within two to three days after hatching, the larvae will need tiny algae in order to feed their very small mouths. Clearly, this is the most challenging part of parenting the babies.

Video: Are Coral Beauty Dwarf Angels Hard To Care For?

That being said, it’s true that the coral beauty angelfish is a resilient, widely accessible, and affordable saltwater fish.

Is Coral Beauty a safe reef?

Coral Beauty does not cause damage to reefs, although there are certain reasons to be cautious around it. In an aquarium, you may safely keep them among the majority of the reef’s fish, corals, and invertebrates. Caution is suggested since it has been observed that certain species of fish have been known to nibble at corals and clams.
There have been instances of Coral Beauty angelfish nibbling on the mantle of clams or eating soft, fleshy coral polyps. This is likely due to the diverse nutritional requirements of these fish.  This seems to be a problem that must be handled on a case-by-case basis and appears to be the exception rather than the norm.

How big do Dwarf Coral Beauty Angelfish get?

They can grow up to four inches long (Michael 2001). In most cases, juveniles are marketed in lengths ranging from 1 to 2 inches. Despite their little size, they need a tank with at least 70 gallons of water since they require a lot of space to move about.

Coral beauty is a non-aggressive fish, but if kept in a small tank, it may become violent. The coral beauty angles may not be suited for aquariums with polyp-covered stony corals or sessile invertebrates because it may eat them.