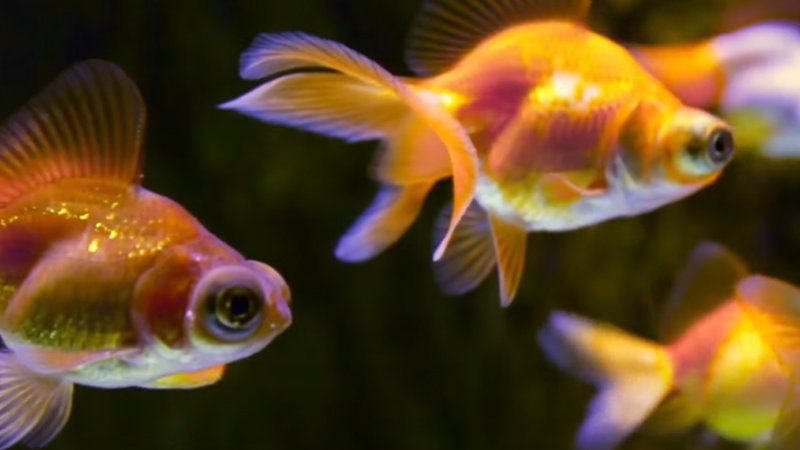 For decades, goldfish have been a popular family pet. Many goldfish owners are unaware that their fishy pals have a lot more in common with them than they know.

These adorable tiny fish have their own set of teeth! These smooth, flat teeth, located in the back of their necks, fall out exactly like human teeth and are designed to aid in feeding and digesting, as well as having an astonishing renewal rate. These teeth are not harmful to humans, but they do serve a purpose for our goldfish pals.

This article will provide you with all of the information you want about goldfish pearly whites. So you can dazzle your buddies with your newfound goldish knowledge.

Do Goldfish Have Teeth?

Simply put, yes, goldfish do have teeth. Although it may appear to be a practical joke at first, it is completely true! However, they are not the teeth we are used to seeing, and they are not situated where most people expect them to be. These teeth are also not meant for ripping, tearing, or biting, as many of the animals that most humans are accustomed to. They are, nevertheless, critical to the goldfish’s physiology and guarantee that it lives a long and healthy life.

So you do not need to be anxious about the next time you wish to swim in a lake or river that may include goldfish. Although goldfish may grow to enormous sizes when left in their ideal environment, you won’t be on the menu anytime soon.

Goldfish, like many other animals, have teeth that serve specialized functions. These teeth are designed for grinding in the case of goldfish, which assists in the process of digesting larger food that the goldfish cannot swallow whole. Goldfish are not the only fish with teeth adapted to grinding.

Where are goldfish teeth located?

Finding goldfish teeth may appear to be a hopeless mission at first. You won’t find them smiling at you or shooting high-quality shots anytime soon. It is also not a good idea to go searching in your fish’s mouth for these teeth because they are difficult to find, not to mention it would be a very painful experience for your pet.

Unlike the great majority of the animal kingdom, goldfish teeth are not located directly in front of the mouth. Goldfish teeth can be found at the back of their throat, called the pharynx. The pharynx is a small portion of the goldfish’s structure that links the mouth to the esophagus. The great majority of life on Earth has a pharynx; you and your goldfish have much more in common than you would imagine!

Goldfish have short and flat pharyngeal teeth. They, like human molars, are employed for crushing and grinding food rather than catching prey. Goldfish have pharyngeal teeth because they are placed far back at the border of their mouth and into their throat in a location called the pharynx, as mentioned above.

Goldfish, unlike sharks and piranha fish, do not require strong teeth at the front of their mouth like some other fish since they are not natural predators of other fish. Goldfish enjoy little, easy-to-chew snacks.

A photo of several goldfish teeth is shown below.

What Are Pharyngeal Teeth?

Our tongue moves food around in our mouth, helping our teeth to work more efficiently. Goldfish, on the other hand, do not have tongues. Instead, they have an organ called a “basihyal,” which has fewer muscle connections and mobility capabilities than a real tongue. This rigid organ has no taste buds and provides little function for eating. Its principal function is thought to be to protect the ventral aorta, an essential major artery, from harm caused by eating live or hard food objects.

Do other types of fish have teeth?

We know that goldfish are not predatory because they have pharyngeal teeth located at the back of their throat, known as the pharynx. But are goldfish the only type that has teeth? No, there are other types of fish that have teeth, but not all fish teeth are the same. They differ in shape, size, sharpness, and position within the mouth of the fish.

Piranhas appear in many movies, most recently in the extremely famous Netflix series “Wednesday.” Piranhas are believed to attack upon the sight of flesh, but they may be rather calm until they detect blood in the water. Piranhas have razor-sharp teeth and powerful jaws that can rapidly break the skin, rip into flesh, and because they swim in big shallows, a feeding frenzy will soon turn any living thing into pure bone.

Sharks are the sea’s top predators and are recognized for their deadly nature. Many sharks have serrated teeth that generate a sawing movement when they come together and bite, making them extremely sharp.

I’m sure you’ve never heard of the sheepshead fish. These fish have human-like teeth that are ideal for removing shelled animals off rocks and crushing them.

The sheepshead’s front teeth are incisor-like and sharp, similar to human teeth, however the molar teeth, which are flat teeth, are placed further back, making them suitable for crushing when combined with the powerful jaws of the sheepshead fish.

Because of its human-like teeth, the sheepshead fish is one of the strangest fish recently.

So why do goldfish need teeth?

Many members of the Carp family, including goldfish, share these structural similarities. Because they are not predatory fish, their teeth never develop beyond their original function.

This grinding function comes in helpful when the goldfish tries to eat more solid items in its natural surroundings. Most goldfish in a fishbowl will consume pellets, flakes, or chopped vegetables like lettuce and peas. Goldfish will devour insects such as larvae, zooplankton, and dead plant and animal materials in their natural habitat. Detritus is dead plant and animal materials that make up a large portion of the wild diet. Because these pieces of food might be rather big, the teeth assist in the grinding process. Because bigger items might pose choking concerns, goldfish teeth have secured their survival for a very long period of time.

Again, there is no reason to be concerned about potential goldfish bites. These teeth are supposed to ground food into a paste, and their teeth are not designed to turn you into a full course meal. However, you should keep your goldfish on your good side just in case.

If you annoy your goldfish considerably, it may attempt to bite you. However, all you’d get is a strange sensation from some goldfish lips and gums attempting to bite you. Even if the goldfish’s teeth were close enough to your finger, it couldn’t create enough force to cause serious injury. It would feel like soft stones scraping across your finger.

Goldfish do not pose any threat to you in terms of biting, and if one were ever furious enough to try, it would be quite dissatisfied with the outcomes, assuming it got up the nerve to try in the first place.

Does a goldfish bite hurt?

Goldfish bites do not harm humans, but they may harm other fish. Even while goldfish have flat teeth rather than sharp teeth, their teeth can still hang on well enough to do some damage if they can put a little fin or tail in their mouth.

You can also read: Can Betta Fish Live With Goldfish to get more information!

Because most goldfish are not predatory fish, they are not aggressive. Because goldfish are amiable, you shouldn’t have to worry about them biting other fish in the aquarium. Goldfish, in fact, are one of the greatest fish to have in a communal tank.

Will goldfish eat other fish?

As previously said, goldfish are one of the most sociable fish and are ideal for community tanks. Therefore, goldfish are unlikely to eat other fish in the tank.

Because a goldfish’s diet can include microscopic worms, insects, and small shrimp, you should avoid keeping newborn fish in the tank as they may be eaten. This is true for the majority of fish since freshly hatched fry is easy prey for everyone in the aquarium.

You can also read: How Long Can Goldfish Go Without Food to see more about goldfish.

Because goldfish lack stomachs, they frequently consume small quantities of food. If your goldfish is consuming other fish, it is most likely because the other fish is sick or wounded and unable to swim away.

Do Goldfish Lose Their Teeth?

Goldfish indeed lose teeth throughout their lives, but fortunately, like sharks, another one replaces it when one falls off. Because goldfish constantly have new teeth lined up behind the gums, old teeth are expected to fall off.

If you have goldfish in your aquarium, you will undoubtedly notice that as old teeth fall out, you may often discover them laying on the gravel. This is quite common, but many fish keepers have no idea what it is.

Can a goldfish have dental problems?

A goldfish’s teeth, like humans’, will yellow and wear down as a result of dental decay. This is due to their diet consisting of soft meals that do not need much chewing; however, unlike humans, goldfish will not need to clean their teeth twice a day.

Video About Teeth Of Goldfish

Do goldfish have sharp teeth?

No, goldfish do not have sharp teeth at all. Their teeth are flat and fairly smooth, more or less like our own molars.

Do goldfish chew their food?

Goldfish chew food with their pharyngeal teeth, which are found at the back of their throat. Because goldfish don’t have stomachs, they must chew or grind their food into a soft paste before passing it through the intestine.

How many teeth do goldfish have?

Goldfish have 2-4 pharyngeal teeth on each side, which are placed at the back of the throat in the pharyngeal arch. When a goldfish’s teeth fall off, it has new teeth ready to replace the old ones.

Do goldfish have tongues?

Nope. Fish do not have tongues since they do not require them. Goldfish, like other fish, have a bone structure called a basihyal, which resembles a tongue and lies on the floor of the mouth.