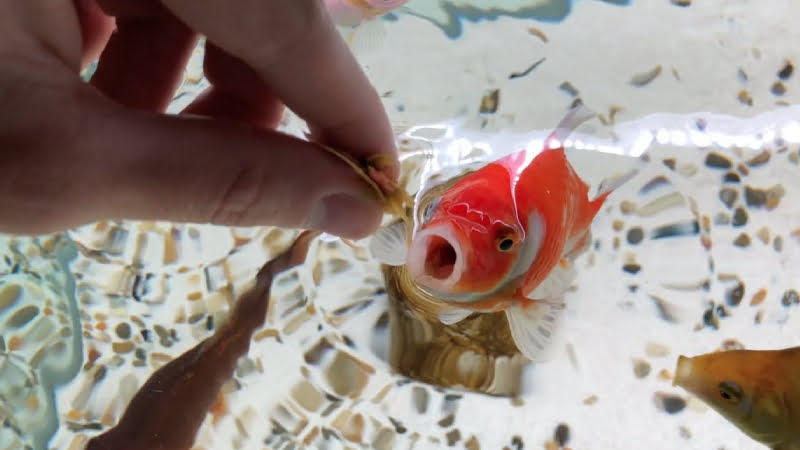 Overfeeding goldfish is very easy, as we are very fond of interacting with our fish, which is part of what makes fishkeeping attractive.

In addition, your fish will soon learn that the best way to catch your attention is by swimming to the top of the tank or coming to the glass at the front of the tank. Therefore, we take this as a sign that they are hungry and we then feed them, thinking we are doing the right thing. At this point, we couldn’t even realize that we had fed them too much.

Can Overfeeding Goldfish Kill Them? And Why

Yes. It is possible for your fish to die from overfeeding due to a number of reasons, as explained in the following sections.

Fish Can Die Directly From Overeating

When it comes to feeding goldfish, they aren’t too smart because they don’t know when to stop. They may go without food for days in the wild because they don’t have easy access to food. They have evolved to grab food as quickly as possible after millions of years of evolution.

It is very common for them to eat more than they require within a short period of time. It does not seem to be a problem in the wild as they will stop eating as soon as they begin to feel uncomfortable.

It is a different story however when it comes to a home aquarium. Do you remember what kind of food are we feeding goldfish? Most of the commercially available fish food on the market is dry food. Pellets and flake food are the staple foods of most home aquarium fish, goldfish are no exception. Once dry foods are wet, they will expand.

Only when you knew that dry food can puff up twice when it is on the body of the goldfish, did you realize how much worse it would be. If the fish have already swallowed too much dry food, once the food expands, they can block block their intestines or press upon their swim bladder. And then, goldfish might die as a result.

Overfeeding Can Kill Goldfish By Polluting The Aquarium Water

In contrast to popular belief, most fish who die of overfeeding does not actually suffer from any kind of digestive problems as a result of overfeeding. Goldfish do not always eat all the food that is given to them, so there isn’t much possible that they will die from overeating. More often than not, problems arise when excess food is left uneaten and ends up accumulating as waste in the aquarium.

During the decomposition process of unconsumed fish food, toxic ammonia and nitrite are released into the water tank. The leftover fish food in the aquarium is not the only thing that can turn into poisonous ammonia and other forms of pollution. Even when goldfish have eaten all the extra food you gave to them, every food you gave them is still in the goldfish’s digestive system. They will eventually come out as fish poop, mainly, but also as other waste products. Ammonia is ammonia regardless of where it comes from.

One way or another, too much food will cause the aquarium to produce too much ammonia in some form. High ammonia and/or nitrite levels can cause stress and even cause the death of your fish in some cases. In small aquariums, this issue is even more serious since the presence of toxins can quickly reach a high level, posing a serious health risk.

It will prevent fish deaths indirectly by keeping the aquarium water clean by not overfeeding fish.

#Tip 1. The amount of food you feed your goldfish should only be able to be consumed in two minutes or less, once or twice every day. It is not how many times you feed goldfish per day that causes overfeeding, but rather how much food you give out at each feeding.

#Tip 2. The fish may still be hungry after 2 minutes, you can give them a little more, but you should not see food falling on the aquarium’s bottom.

#Tip 3. Make sure that you feed your goldfish according to how many and what size they are, not according to the size of the tank.

#Tip 4. If you have a lot of scavengers in your aquarium tanks such as catfish, loaches, snails, shrimp, or any other creatures that can help clean the bottom, you will keep it cleaner.

If you do not have any bottom feeders, then you will need to remove the uneaten food after an hour or so. After an hour, if the food is still there, it will not be eaten by the fish, so it needs to be removed from the aquarium so that the water will not be polluted.

#Tip 5. Do 10% water changes every week or 25% on a biweekly basis, along with a light vacuuming of the bottom at the same time.

Video About Can You Overfeed Goldfish

How do you tell if you are overfeeding your goldfish?

You may be overfeeding your goldfish if you notice any of these signs. When your goldfish cannot eat its entire meal in three to five minutes, you’ve given it too much food. Additionally, you will also notice the accumulation of excessive food in the substrate, where it will break down into a brownish-gray or black-colored substance called “mulm”. That’s when you know you are overfeeding.

Why is my goldfish always hungry?

In general, goldfish are one of many kinds of fish that will continuously eat food whenever it is available. Goldfish will come to the front of the tank and look like they are “begging” for food. However, this behavior is not a sign of hunger, it is just learned behavior.

How long can goldfish go without food?

In the wild, goldfish can go up to two weeks without food, but it’s not recommended to leave your goldfish without food for so long as captive goldfish have a daily feeding schedule. When you are going to be away for more than a couple of days, arrange for your goldfish to have a regular schedule of getting food.

Knowing why overfeeding can kill your goldfish is the best way to avoid overfeeding them. In some cases, goldfish will die because their stomachs is overloaded when they overeat. But the main reason is that overfeeding pollutes the water and then causes death.

Following our tips will help you avoid killing your beloved fish by overfeeding.