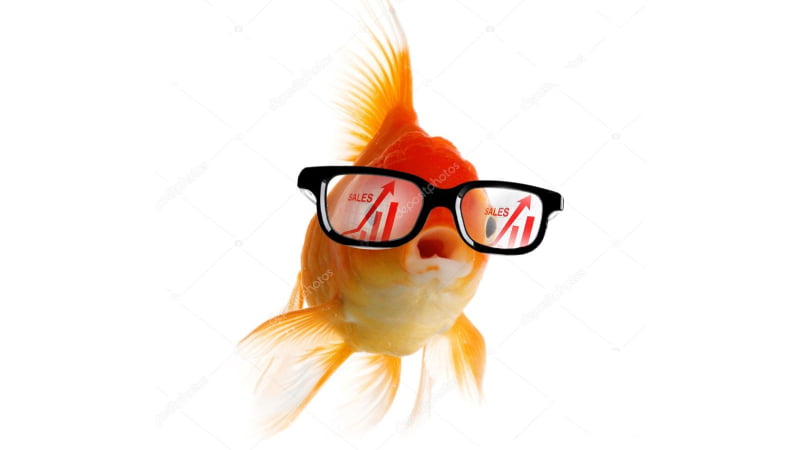 Among all of the fish kept as pets, the Goldfish is probably one of the most popular. This group of freshwater fish belongs to the family Cyprinidae, order Cypriniformes, and has been one of the earliest modern domestic species of fish.

Goldfish are very intelligent and sensitive. As a result, they exhibit an impressive ability for learning and may have a memory span that is up to five months long. Furthermore, they have a keen sense of awareness of their surroundings, using noises, sights, and other cues to find food and stay alive.

Because of these characteristics as mentioned above, a question has been raised among goldfish keepers: “What is the IQ of a goldfish?”

Let’s find out the answers in the below sections.

What Is The IQ Of A Goldfish?

Goldfish, according to research, have an IQ between 30 and 40 points. We would not consider that to be a sign of intelligence in humans, but in animals, it is far ahead of what is considered to be an acceptable level of intelligence.

In certain circumstances, they have even exhibited greater intellect than some of the more intelligent warm-blooded creatures.

Goldfish and koi are both members of the carp family. There is evidence to suggest that members of the carp family have memories that are at least three months in length. The duration of their long-term memory has been shown to be twice as long in certain circumstances. It has been discovered Goldfish are not only an intuitive and sensitive species, but they also have a memory span of up to five months (which is far from the ‘goldfish brain’ concept).

In addition, Goldfish have recently been the subject of many questions regarding their memory and IQ because of their worldwide popularity as aquarium fish. Since Goldfish were one of the first domesticated fish, they have probably been at the center of considerable expert research determining their intelligence and ability to learn from humans. Also, their use of sights and sounds, as well as their ability to detect signs of food or survival, indicates that they are highly perceptive of their surroundings.

Goldfish are now believed to recognize humans who feed them regularly and get excited when they see them. Their behavior, whether it be a call to the belly or trained, certainly indicates their intelligence.

Your Goldfish are capable of recognizing you, responding to musical signals, and seeing the whole color spectrum, just as people can. Moreover, baby goldfish have a difficulty in distinguishing the hue blue, quite similar to how infant humans do.

Goldfish have also been taught by scientists and young enthusiasts alike to do a variety of tasks, including the following:

Some Examples To Know How Smart Goldfish Are

Goldfish are used in scientific research

Since Goldfish are so easy to train, they are used in a wide range of scientific studies. In fact, only mice outnumber them.

Goldfish have been utilized by researchers in an effort to better understand memory and learning. Some of the research included putting the fish in mazes to test their capacity to recall their surroundings, which the fish are very capable of doing.

Some researchers have even included music in their experiments to test how various sounds affect the fish’s behavior. Researchers discovered that goldfish exhibit behavioral changes in response to jazz and classical music. Therefore, if you want your fish to have a pleasant day while you are at work, you should keep some Bach music playing for them.

Additionally, it has been shown that Goldfish are able to recognize color differences. When they are fed with their food arranged around a red leggo, they quickly learn that the color indicates that they are being fed. After some time has passed, they will react rapidly to that color while searching for food.

As more recent research comes to light demonstrating that fish have consciousness, it’s feasible that existing rules governing fish may be revised in response to this expanding body of evidence. Moreover, they may even be provided some of the same protections that other pets, like cats.

The Goldfish’s ability to learn

Researchers have shown that Goldfish are very good in associative learning abilities and social cognition. They can also identify one person from another because of their keen eyesight. If you’ve ever watched your Goldfish, you’ve probably noticed that they are more friendly and outgoing while you’re there. Meanwhile, they will hide or flee if someone new enters the tank.

You will learn that your goldfish associate food with your presence if you interact with them often during feeding time. Consequently, they will “beg” for food whenever you approach their tank. Moreover, if you keep a specific feeding schedule for your Goldfish, your fish will soon become accustomed to anticipating feed time.

Goldfish will no longer see humans as possible hazards if they have frequent visual contact with them. In addition, a goldfish may even be fed by hand after a few weeks or months in a tank; however, we don’t encourage doing so!

Moreover, Goldfish have inherited habits from their carp-like ancestors. All of these behaviors—various eating, reproducing, and avoiding predators—help them survive. The Goldfish is extremely social and outgoing, and so, they display schooling behavior.

Furthermore, long-term memory lets this fish maintain track of complicated social interactions. They have a spatial memory that is comparable to that of any other vertebrate. And this enables them to create mental maps that may assist them in navigating their aquatic environment.

Video: Are Goldfish Smart?- What is the IQ of a goldfish? Do Goldfish recognize their owners?

Are Goldfish more intelligent than other fish?

The majority of people hold the misconception that Goldfish only have a memory of three seconds, much like Dory, who appeared in the classic Disney film Finding Nemo. This is incorrect. You may be surprised to learn that your fish have more memory than you previously thought. However, in spite of the Goldfish being more intelligent than most people assume, their IQ is lower than much other fish like freshwater salmon,…

Is it true that Goldfish have emotions?

Fear is an emotion that indicates a degree of memory and cognition in Goldfish, which has been observed in several studies. To put it another way, a fish with this level of intelligence knows when something is going to hurt or be unpleasant.

Are Goldfish able to recognize humans?

Yes, according to recent research. In a study, scientists discovered that the fish can accurately distinguish between hundreds of unfamiliar faces and a recognized human face. This is an amazing fact, right?

Is it possible for Goldfish to play football?

capable of playing some sports such as football, basketball, and fetch. They also have a number of impressive tricks up their sleeves! Until not very long ago, all of this was accomplished by a goldfish type known as Comet. Comets, on the other hand, are very active and spend a great deal of time investigating their surroundings.