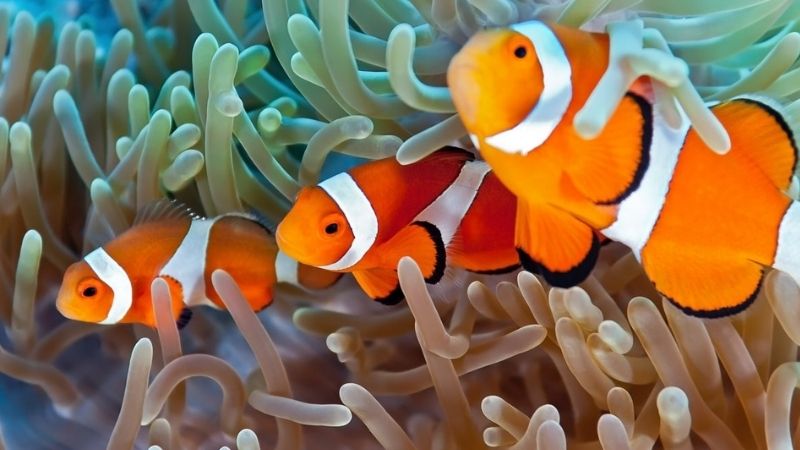 The clownfish need an anemone for food, protection, and reproduction. Clownfish are unable to care for themselves in the wild without an anemone. The current opinion is that they either won’t coexist peacefully or the clownfish will eat the other fish’s eggs and larvae because it doesn’t need any other food source.

As with any critter in the ocean, nothing is cast in stone, and many clownfish will not go anywhere near their “preferred” anemone.

Clownfish have been known to host many things other than anemones, including feather dusters and toadstool corals after rejecting every anemone presented to it

Some aquarists have noticed that clownfish tank-raised in captivity tend not to host anemones as readily as the wild-caught ones do. The reason for this is suspected to be that these marine creatures lose the instinct or need for protection from potential predators when they are raised without seeing their parents hosting anemone symbionts.

Clownfish are found near their host anemone (except when swimming out to touch the ‘butt’) in the wild. In a home aquarium, however, clownfish don’t need anemones and it might be best if you don’t introduce one.

Clownfishes and anemones make for unlikely companions, but clownfishes do not require their presence in the wild.

According to a survey in Wilkerson’s book about Clownfish, less than 1 in 18 anemones survive for 3 years and 1 in 36 make it to 5 years.

The good news is that clownfish can live in saltwater aquariums on their own, without a host anemone. Look for them to take up residence in surrogate invertebrates such as sea anemones and sea fans.

If you MUST have an anemone, ask your local fish store for a bubble tip anemone. These anemones are, on average, harder than the average one and look great in the tank. They come in different colors that blend green and red together.

Anemones, while attractive and relatively peaceful, can wreak havoc in your aquarium when they drift around. They have a nasty habit of stinging fish and other objects as they float past them, even ending up being sucked into the filter’s suction. It’s important to be realistic about all anemone challenges before getting one.

Why don’t clownfish get stung by anemones?

According to AskNature.org, clownfish and anemones share a symbiotic relationship to the extent that without one another the other would die. Clownfishes get protection from their mucous coating which can be spread by contact with an anemone as it spreads its mucus across its body. The clownfish absorbs some of them and the anemone gets the rest.

According to wiki answers, the secret lies in how clownfish mucous interacts with that of other fish and they lack the substance in regular mucus that triggers the stinging response.

A third site does not report that they need anemones and they could live with or without them.

Can an anemone kill a clownfish?

Clownfish are protected from anemones because a sting to the fish would not hurt it.

Clownfish are believed to be protected from predators via a mucous coat that is found on the outside of their skin, which varies depending on the species.

It is suggested that some species of clownfish are innately protected from an anemone’s sting before ever coming into contact with the anemone. This is because the mucus coat they produce is sufficient to protect them from the anemone’s sting.

Clownfish are at risk of dying without a host anemone to live on, but that’s not the only reason clownfish benefit from living in an anemone. They have two options for living with their host: The first option is by establishing themselves as fully independent beings which can happen if they relocate or the second, more common choice is

Importantly, clownfish that have an innate immunity to the stinging of the anemone fish exhibit this “acclimation behavior.” After being in contact with other members of their species coated with these antigens, they too become immune to its sting.

It has been proposed that these ants serve as a type of “chemical camouflage ” for the clownfish, which would otherwise be an easy target of predators.

Can you keep clownfish without anemones?

Your clownfish do not need an anemone to thrive and will do just fine without one. However, if you’re looking for a symbiotic relationship or would like your fish to associate with something, tank-raised clownfish will live amongst either anemones or corals just as well.

Are anemones hard to keep?

Hobbyists don’t always have the space to keep anemones in their tanks because of special lighting, water flow, and oxygen levels. The truth is that keeping anemones requires owners to take on a new level of responsibility for their fish’s care.

Will clownfish live in a fake anemone?

Clownfish will not only host in fake anemones, but some people have also taken rubber bands and stuck them into epoxy. Clownfish are attracted to the right flow and they might start hosting in those.

In conclusion, clownfish will live with or without anemones. If they are kept in a tank, you can provide them with artificial ones as well. Clownfish also do not need to be around their hosts all the time for protection from predators.