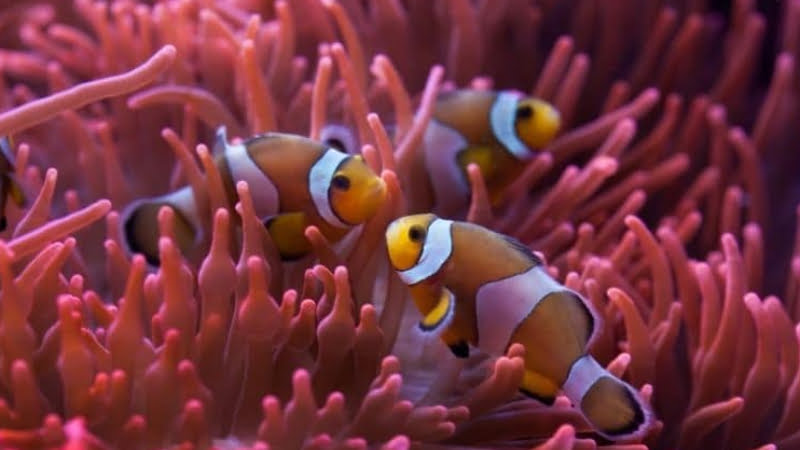 Clownfish are hardy creatures that can live in a variety of environments. They have an innate ability to adapt and thrive, so they don’t require much help from humans.

However, hardy anemones for clownfish are something you may want to consider adding as part of your environment if you’re looking to increase the likelihood of success with this type of fish. Learn more about how hardy anemone for clownfish works by reading through this blog post!

Best Anemone For Clownfish (They Prefer These)

When most people think of clownfish, they see them peeping out from an anemone’s polyps. This is due to a symbiotic interaction between clownfish and sea anemones in the wild. Anemones thrive on the nitrogen that the clownfish generates, while the fish eats the anemone’s leftovers. Although clownfish can thrive in a home aquarium without anemones, it’s frequently interesting to watch them interact with them, and it provides a more natural, healthy environment. Selecting the right anemone, especially one that is suited to certain clownfish species like Ocellaris or Picasso, can assist in establishing a long-term, mutually beneficial connection.

Anemones in the wild and giant carpet sea anemones are favourites of clownfish. It’s usually preferable to match specific clownfish with the anemones they’d pick in the wild. Ocellaris clownfish, on the other hand, have been reported to adapt successfully to bubble tip anemones.

On the other hand, bubble tips are known for being aggressive and reaching out, so it’s best to keep them away from other fragile fish, crustaceans, corals, and anemones.

When it comes to choosing partner anemones, Picasso clownfish are a little more flexible than Ocellaris. The Picasso, like the Ocellaris, adapts well to bubble tip anemones. Merten’s and gigantic carpet sea anemones, as well as the beautiful sea anemone, are among their favourites.

Another favourite of Picasso’s is the leathery, or Sebae, sea anemone. This beautiful anemone, white or tan with vivid blue tips, is aggressive and challenging to keep since it does not adapt well to living in an aquarium.

Pairing it with a clownfish, on the other hand, can help it adapt more rapidly and significantly increase the anemone’s life.

Other Good Anemone Choices For Clownfish

Many clownfish, notably the Picasso, may adapt to live with several different anemone species in addition to the anemones described above. For example, the beaded sea anemone is a common choice for many clownfish and is a favourite among aquarists due to its hardiness and ease of care.

Another good choice is the Haddon’s or saddle anemone, prized for its vibrant colors and unusual form. This anemone is semi-aggressive and easy to care for, making it an excellent choice for intermediate aquarists.

They may grow to be nearly 3 feet long, so they’ll need a tank with a capacity of 100 gallons or more.

Intermediate aquarium keepers should consider the long tentacle or corkscrew sea anemone. This anemone, which is about a foot and a half wide, comes in various colors, including purple, tan, and black, but is most commonly red or orange.

Some clownfish prefer this anemone form in nature, but many clownfish will gravitate toward the corkscrew anemone in the home aquarium.

Entacmaea quadricolor, or Bubble-Tip Anemone, is a resilient and cheap anemone that acts as a good host organism for clownfish, porcelain crabs, and Periclimenes shrimp. Clownfish Treatment. It also has the highest number of Clownfish species (13), isn’t picky about what it eats, and doesn’t get particularly huge. They’re simple to feed and don’t move around as much as some other varieties in the hobby. Clownfish are subject to the same illnesses and injuries that affect other marine fish, including bacterial, fungal, parasitic, and other disorders. Each month, around 50-500 eggs are produced, which hatch after eight days.

Clownfish, despite their hardiness and ease of care, can become unwell and require frequent monitoring and treatment. Concerns about your health Anemones are rarely noticed by the Ocellaris. This involves water testing and tank cleaning on a regular basis. This robust fish eats well and is simple to breed in your home aquarium. If you want to breed your clownfish, clay flower pots are the ideal item to place in your tank. Clownfish may be kept together, although it’s best to maintain them in pairs or groups of the same species. Entacmaea quadricolor is the scientific name for the bubble tip, bulb tip (or tipped), or Rose anemone. Clark’s clownfish resembles common clownfish in appearance and is noted for being hardy or robust and resilient. Tomato, Maroon, and Clarkii clowns appear to be the only ones who regularly host an anemone.

The most popular species is the common clownfish (also known as the clown-anemonefish), which has distinctive orange-and-white stripes. Sea anemone information, including the ten species of anemones that host clownfish, as well as the ones that are tough aquarium anemones, and a checklist for buying sea anemones! This anemone is visually appealing, inexpensive, resilient, and versatile. Consistent water parameters are required. Krazykarel started the thread on March 10, 2008, and it was last updated on March 10, 2008. Clownfish are typically highly tough and disease resistant because they are captive-bred, as long as your tank is well-maintained.

Discussion about Anemones and Clownfish How hardy are wild clownfish? Clownfish Ocellaris This clownfish, a member of the Pomacentridae family, has a stunning orange hue with white bands and black borders, made even more popular by the film “Finding Nemo.” They begin moving gently at the bottom of the tank for 15 days after hatching, eventually finding a suitable home among anemones. Although the Ocellaris Clownfish prefers a variety of sea anemones, the Magnificent Anemone, also known as Heteractis Magnifica, is the most frequent and nicest anemone.

While the anemones provide a safe refuge for the clownfish, researchers believe the anemones eat some of the food particles that the clownfish leave behind. In terms of illumination, this anemone is extremely demanding. Anemone Clownfish: 10 Clownfish Host Sea Anemone Species Many hobbyists maintain this new designer clownfish with the popular and resilient Bubble Tip Anemone because it accepts a broad range of host anemones (Entacmaea quadricolor). That is if your tank is capable of supporting one.

What is the easiest anemone to keep?

What anemones are best for clownfish?

Clownfish and anemones share a symbiotic connection in their natural environments; each relies on the other to thrive.

Can you keep clownfish without anemones?

Yes, clownfish can live without anemones, especially in aquariums where there isn’t much of a hazard.

With the above information of the article, we hope to provide you with the necessary details on hardy anemone for clownfish and answer your questions. I hope you have a rich and eye-catching clown pool.