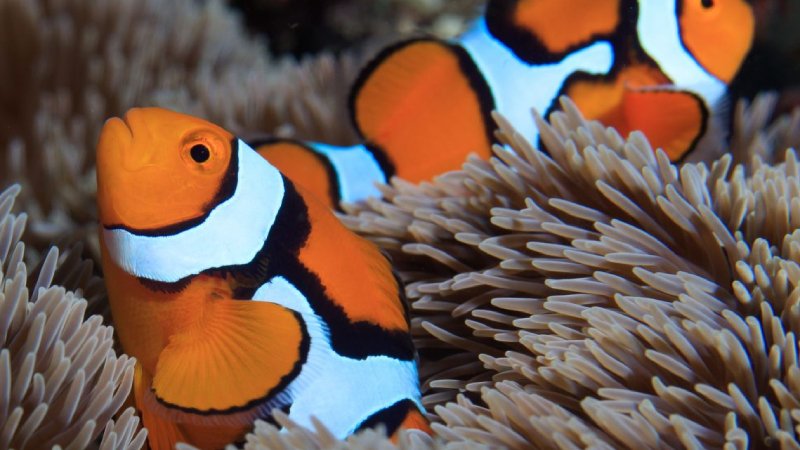 Have you ever seen clownfish sleeping in anemone? It is fascinating to see these brightly colored fish with clown-like smiles sleep peacefully. They are only vulnerable when they are asleep. It is because of this that protective anemones constantly surround clownfish.

In this blog post, we will explore clownfish behavior, their symbiotic relationship with anemones, as well as how clownfish sleep while inside of one!

Clownfish Help Their Anemones To Breathe At Night

The relationship between clownfish and sea anemones is one of the most well-known in the animal kingdom. Unlike in Pixar’s Finding Nemo, clownfish seldom leave their anemone. They dart through the water overhead throughout the day to capture bits of food. They sleep soundly amid the stinging tentacles at night. And the nocturnal portion of this regimen continues to amaze us.

For a long time, everyone assumed that the two partners were a self-preservation organization. The anemone tentacles protect the clownfish from predators, while the clownfish scare away butterflyfish that would devour the anemone. In Alabama, Nanette Chadwick of Auburn University has demonstrated that the fish nourish the anemone with ammonia-rich feces. Now, Chadwick’s team has discovered that the fish provide another secret service: they assist the anemones in breathing at night.

Sea anemones have limited control over water flow over their bodies and rely on local currents to bring oxygen and nutrients in. For decades, experts have speculated that clownfish may be of assistance, but no one has put that theory to the test.

Chadwick and his student Joseph Szczebak accomplished this by examining the two-band clownfish and its host, the bubble-tip anemone, both of which were obtained from the Red Sea near Aqaba, Jordan. Szczebak and Chadwick demonstrated that they utilize around 40% more oxygen together than apart in the dark by separating the couples and monitoring the oxygen contents in the surrounding water. This could only happen if they were able to establish contact. They consumed less oxygen if separated by a mesh barrier and could see, smell, but not touch one another.

To figure out why Szczebak used infrared cameras to film the couples at night, and discovered that the clownfish were considerably more active than anybody had expected. While other marine researchers stated that clownfish stayed stationary all night, Szczebak found that they spent most of their time moving. They would wiggle violently to fit themselves between the anemone’s tentacles, frequently turning 180 degrees in the process. And they never acted this way when anemones were not around.

The fish’s frantic dancing aerates the anemone. Despite their swaying, the tentacles aren’t great at transporting water back and forth, and stagnant zones can form around them. This restricts the passage of prey, nutrients, gases, and other substances, severely limiting the anemone’s capacity to develop. On the other hand, the clownfish actively move and opens up their tentacles, allowing water to pass between them. The fish consumes more oxygen due to the effort it exerts, and the anemone consumes more oxygen as a result of its partner’s antics, explaining the duo’s 40% increase in oxygen consumption.

The same processes are at work on coral reefs elsewhere. Many fish, such as gobies and damselfish, spend the night among corals, where they are subjected to chokingly low levels of oxygen due to weakly moving water. Both are known to beat their fins quicker than usual to generate an excellent flow.

Certain fish stay in continual motion confuses novice fish owners, who cannot but assume that their fish are awake but merely mesmerized. It takes them some time to figure out how to read the signs.

Adding some stimulus to the aquarium is the most excellent method to tell if your clownfish is genuinely sleeping or simply swimming slowly. Don’t frighten the fish. Do anything that would typically pique the creature’s interest. One possibility is to introduce food to the tank. If your clownfish do not reply while having its eyes open, it is sleeping.

Of fact, some illnesses will cause your clownfish to become drowsy. It would help if you did not always assume that your fish’s failure to respond to stimuli indicates that it is sleeping. Keep an eye out for trends. If the species exhibits the same amount of inactivity at the same time every day, it is simply sleeping.

It would help if you also put your clownfish appearance to the test. Keep an eye out for white spots or torn fins. One of these might indicate that your fish is ill rather than asleep. However, if they appear normal, you should be suspicious that they are displaying a physiological activity.

There should be times when your fish is active and responsive. Otherwise, if it is constantly slow, it is most likely sick. If it has been completely dormant for several hours, you may have a dead fish on your hands.

Fish, like people, have a time of day or night when they eventually wake up. They don’t sleep eternally. This may seem simple, but you’d be amazed at how many fish owners have had dead fish in their tanks for days without noticing it.

Sleep is a complicated undertaking for fish in the wild. They are quite vulnerable to attack, which is why some of them must remain on high alert. They have to be ready to make a quick escape the moment a predator enters their vicinity. Of course, this isn’t an issue in an aquarium, not unless you have surrounded your clownfish with dangerous tank mates.

Not all fish sleep in the same manner. Some will sleep at the tank’s bottom. You’ve most likely seen this in your clownfish. This is the scariest behavior for novices since fish that are lying down at the bottom appear to be dead.

Other fish aren’t satisfied with merely lying on top of the substrate. They’ll locate a hole to dig into. Many will remain afloat, slowly drifting across the ocean. These are the ones who appear to be captivated rather than asleep. They are also the least frightening because they do not appear to be dead.

Do clownfish sleep in the bottom of a tank when no anemone is present?

Clownfish sleep at the bottom of the aquarium at night among anemones or near hollow shells in a trance-like state.

Is it normal for clownfish to sleep at the top of the tank?

They had plenty of other “normal” places to be hosted. So yes, perfectly abnormal.

How long does it take for clownfish to bond with anemone?

Generally, the anemone will attach within the hour. After it connects, it moves around via its foot until it finds a good spot and then starts to burrow.

Clownfish, like humans and other types of fish, sleep. Their regular activity is to lie motionless at the bottom or inside anemones. They should do so at night. As a result, I urged you to simulate the outdoor lightning hours within your tank. Hopefully, the information we provide about clownfish sleeping in anemone will help you have more exciting knowledge about clownfish.