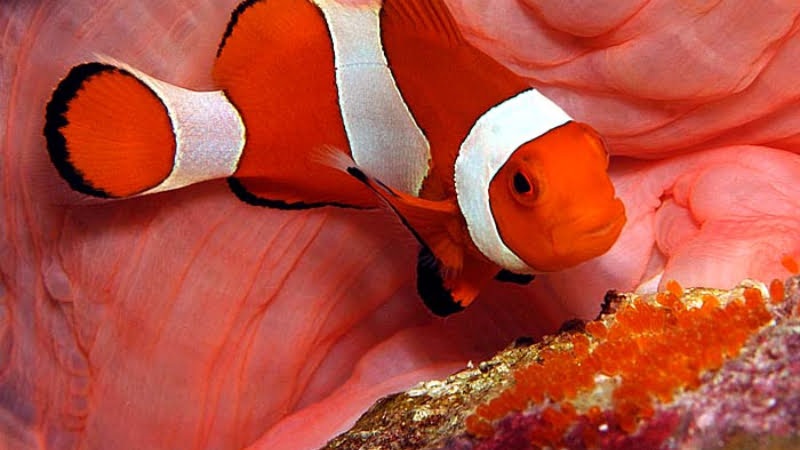 Clownfish can and do breed in the aquarium. Breeding fish is a fun project for the more experienced aquarist, and it’s very satisfying to successfully raise the fry!

There are several species of fish that eat their young. Are you wonder if clownfish eat their babies? It is also one of the most frequently asked questions by clownfish owners.

Do Clownfish Eat Their Babies?

The truth is that it sounds pretty “cruel” that clownfish will probably eat their own babies. When laying eggs, clownfish will protect their eggs but once the eggs hatch, the babies are on their own. Their parents take no part in raising them. The fry can be eaten by other fish, or even eaten by their own parents!

To prevent clownfish parents from eating their babies, you should move the eggs before they hatch. If you can’t move them, you’ll have to wait until they hatch and quickly move them somewhere else.

Do Clownfish Eat Their Own Eggs?

The answer is the same as the answer to the question of whether clownfish will eat their babies. Although clownfish are generally adept at raising their own young from eggs, certain circumstances and environmental pressures can cause clownfish to eat their own eggs. Males are the custodians of the nest, so they are more likely to eat the eggs.

This very natural and advantageous adaptation helps to cull the weak, damaged and sickly eggs. But sometimes, this natural behavior gets awry that they will mistakenly eat even healthy eggs.

5 Common Reasons Why Clownfish Eat Their Own Eggs

1. When the eggs are non-viable

As a natural instinct, male clownfish will swim very close to their eggs to care for them. He will eat the non-viable eggs. These likely were not fertilized. If Clownfish do not eat them, those non-viable eggs will attract harmful bacteria and fungi that endanger the entire clutch.

2. Eggs that are infected with fungus

When infected with a fungus, clown eggs will be lost. Males will eat these sick and infected eggs to avoid infecting other eggs.

3. When a pair first starts spawning

When a pair first starts spawning, they are inexperienced, so most eggs won’t be fertilized properly and start to decay – that’s why clownfish have to eat their eggs.

This usually happens with the first 2 batches (or so) so they can get it right.

4. The parent clownfish is in poor health

Clownfish require a lot of energy to produce eggs and then tend them until they hatch. Clownfish eggs are very nutritious and lots of work goes into raising them. When parents run out of calories, the temptation of caviar may be too much for a hungry parent to resist.

If the tank or the particular place in the tank where they choose to spawn is in a stressful, crowded area, that’s also a trigger for clownfish to eat their eggs. Those stresses will distract them from their egg-laying task. Pressure also comes from the fights that lead to carelessness and damage to the eggs. You must ensure a peaceful space, adequate conditions for the spawning to occur most favorably.

Do clownfish leave their babies?

The clownfish seem less anxious, and they generally leave the newly hatched larvae alone so you need to snag the larvae out of the breeding tank after hatching. You should set up a dedicated breeding tank to make it easier to take care of fish and rescue baby clownfish.

How many babies can a clownfish have?

The female will lay from 100 to 1,000 eggs, which are 3 to 4 millimeters long. The male then passes over the nest and releases sperm to fertilize the eggs. Then, the female swims off. Not all eggs can hatch.

Where do Clownfish produce their eggs?

In different hiding spots that they find on live rock. The live rock will provide the fish with hiding places and will give a surface on which the clownfish can lay and care for their eggs. Or clownfish lay eggs on any flat surface close to their host anemones.

To sum up, it is entirely possible that the parent clownfish will eat their own young and eggs. You should set up a dedicated breeding tank to make it easier to take care of fish and rescue baby clownfish.