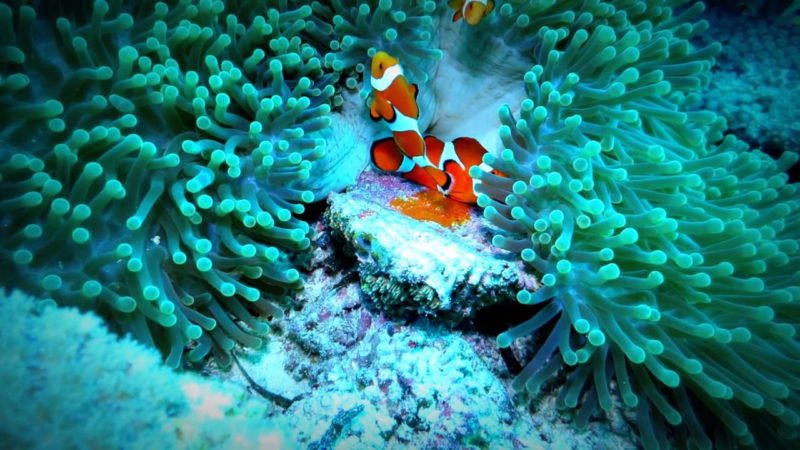 The clownfish is a favorite among aquarium enthusiasts. Known for their bold contrasting colors and “smiling” faces, clownfish are one of the most attractive fish to keep in an aquarium. Clownfish are also known for laying eggs, which can be as small as 0.06 inches (1 mm) in diameter!

This blog post contains some interesting facts about clownfish laying eggs that you may not have heard before!

How Many Eggs Do Clownfish Lay ?

Clownfish can lay how many eggs?

Clownfish are known to lay between 100 and 1500 eggs in a single event. The average pair pledges about 400-500 during spawning.

A clownfish’s egg production varies based on:

Larger fish, like the maroon clownfish, produce as many as 1000 eggs at once. But smaller species are much more modest, with just a few hundred.

Have your clownfish ever laid eggs?

Among all saltwater fish creatures raised in tanks, clownfish are likely the most candidates to breed. However, taking care of a baby clownfish until they grow requires your patience, persistence, luck, and maybe need some extra equipment.

The place that clownfish lay their eggs

Clownfish lay their eggs on a small patch of rock that they’ve cleaned. In aquariums, aquarists often use pots or tiles as substitutes for more natural stones to make the job easier and keep new parents from accidentally eating the eggs.

How Long Does It Take Clownfish Eggs Ready To Hatch?

Clownfish spawn every 10-14 days when they are spawning consistently. The eggs of clownfish hatch between 8 and 10 days later. The larvae hatch on consecutive evenings, which can drive you insane if you try to gather them from a breeding tank.

Yes! Clownfish eggs will survive until they hatch if adequately fertilized and cared for by the male – around eight days after fertilization. Following that, you’ll notice tiny clownfish larvae approximately three millimetres long. On the other hand, the freshly born larvae require particular nourishment and care to ensure their survival.

When Will Clownfish Eggs Ready To Hatch ?

When clownfish start laying eggs, they usually keep to a timetable. In around 6 to 8 days after the eggs are deposited, they will be ready to hatch. The time it takes for eggs to hatch is determined by a variety of factors, including the temperature of the water and the species.

The easiest approach to predict when they will hatch is to use a calendar. The eggs will always hatch on the same day as long as the environment remains constant. So, if you obtain the first clutch of eggs and discover that they hatch on day seven after being deposited by keeping meticulous track of the development, you may be sure that the eggs will always hatch on day 7. Again, this is assuming that everything else remains constant.

They are predicting when the eggs will be more challenging if you don’t know when the nest was laid. The eggs, on the other hand, will seem extremely silver on hatch day. This is due to the egg being nearly transparent, allowing you to see the clownfish larvae within plainly. If the great majority of the eggs are silver and their eyes can be seen within the eggs, they will most likely hatch that evening.

Before Clownfish eggs ready to hatch

You must have live food for the larvae before you can even consider growing clownfish from eggs. Clownfish larvae will consume plankton and other nearly tiny plants and animals in the environment. Rotifers are by far the most easily accessible food for clownfish larvae in captivity. They cannot survive without rotifers and will not take dry food for at least the first several days of their life.

Reed Mariculture has an excellent piece on rotifer culture. If you can’t culture and maintain the rotifers, your efforts to raise baby clownfish will be futile.

Clownfish eggs hatch only at night. When hatching eggs at home, having a separate hatching tank ready for them on hatch night is the best chance. This should be done where you can have complete darkness, not in a crowded area where people will come in and turn on the light.

The small fry will generally emerge from the eggs within a few hours after the lights are turned out on hatch night.

I examined how long it took for two pairs of clownfish to lay eggs, as well as generally how often they breed. One group seemed more regular in their breeding while the other one alternated between regular and irregular periods with no activity at all.

When spawning regularly, the clownfish laid eggs about every 10-14 days. The eggs hatch in 8-10 days from being bred and on consecutive evenings when enough was spawned to overwhelm me with having to collect them.

The best way to take care of the fish and rescue baby clownfish is to set up a breeding tank. Clownfish seem less anxious in this environment, which means they generally leave newly-hatched larvae alone after they break free from their egg sacs

Ways To Protect The Clownfish Eggs

Place rocks and plants in a saltwater aquarium, providing spaces for clownfish to hide as well as surfaces they can lay their eggs. Soon after one batch of eggs is laid, the female will switch into a food-hunting mode while the male is left caring for them until they hatch. It is also up to the male partner to remove the eggs that do not get fertilized and those infected with fungus.

Clownfish generally lay eggs averaging 50 to 200. Breeding can take place a few times per month, and females live an average of 30 years. Clownfish breed more under favorable conditions of salinity at 30% or higher and temperature around 25oC.

When the eggs are first laid, they are a pinkish to orange color. They then become grayish in texture and finally silvery that our eyes can see. When the fry survives for about 10 days, it is certain that you will end up with a new clownfish.

How To Care For Clownfish Baby

Place the new hatchlings into a separate aquarium

The breeders can transfer the eggs to new tanks when they hatch or wait for the fry to come out of their eggs. Regardless, you need to separate the clownfish from their babies after hatching and put them in separately-framed tanks.

As embryos, clownfish hatchlings use the yolk as their only source of sustenance. Through a process called hermaphroditism, the female can produce eggs for males to fertilize; she will eventually turn into a male and reproduce through parthenogenesis, which is an unfertilized egg that develops into a live member.

One way that you can maintain a clean aquarium is to filter the water. This will help keep harmful bacteria and other organisms out of your water in order to keep it clear enough for you to see the tiny rotifers.

Try your best to help your fry turn into a fish

One of the most difficult transformations a clownfish undergoes is when it transforms from its larval stage to becoming an adult.

To give them a good chance at developing, start feeding the eggs with live brine shrimp that provide enough energy to grow rapidly. To improve their chances, even more, add some nutrients to the water, such as those sold for saltwater tanks.

If your clownfish make it through the transition, their distinctive color should start to show after about five months. They’ll grow rapidly, so you need to keep feeding them regularly and monitor your tank for water quality.

How do I feed clownfish fry?

Ensure that your fish are equipped with adequate lighting but not too bright. A single light bulb is sufficient, but the light should be dispersed to the areas where your fish are located.
To feed a Clownfish fry, you can offer freeze-dried brine shrimp or some fresh brine shrimps as they become slightly older.
Half the water regularly to improve visibility. Keep a steady supply of food because you’re trying to boost nutrition levels at this stage in the newborn’s life, and it can be chancy without adequate nutrition intake.

To conclude, Clownfish, like most other fishes, will lay eggs. This fish is a shy species by nature, but with diligent and patient ownership, they can become sociable pets and spawn joyfully.

Raising baby clownfish from eggs laid in your reef aquarium is an incredible hobby. If you have a pair of clownfish, who’ve gone broody and laid eggs, congratulations! And I hope my blog will be informative to you. Thanks for reading!