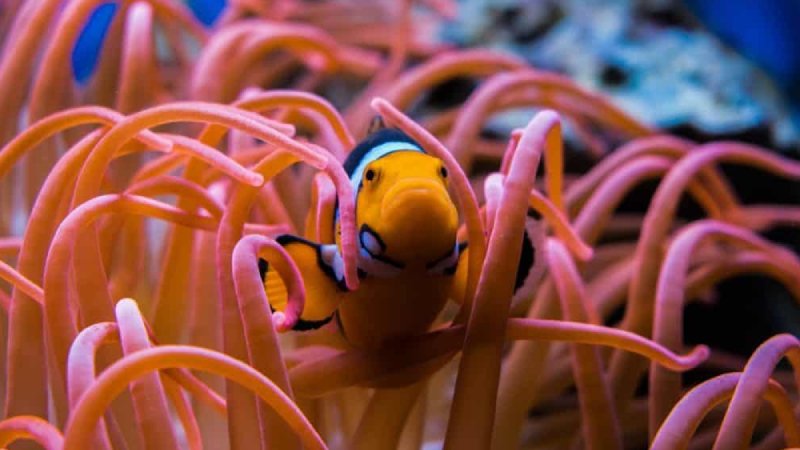 The clownfish is a fascinating creature. These small fish have many interesting behaviors, one of which is clowning around with other clownfish in the reef. Another behavior that clownfish exhibit is sleeping! Clownfish sleep at night when they are not actively searching for food or looking after their eggs. Like humans, clownfish need to sleep to survive and recover from the day’s activities.

In this blog post, we will discuss clownfish sleeping and what it means for them as well as provide some information on how clowns interact with other animals in their environment while they are asleep

Clownfish live in warmer areas of Southeast Asia, the Great Barrier Reef, and Indo-Malaysia. What is surprising, however, is that they are predominantly fed uningested food. Clownfish are generally patterned with orange and white stripes, which have garnered them fame in movies because of their adorable physical features.

The clownfish have a special antitoxin immunity that defends them. The dominant female leads these social, community fish, but if she dies the next largest female will take her place. Clownfish communicate through clicking noises and sounds.

Does A Clownfish Ever Sleep?

The most exciting thing about clownfish is that they sleep. They share this trait with almost every other fish out there, and they have daily periods of rest; however, unlike many other fish, their eyes are not concealed behind eyelids. If the aquarium lights are on all day, the tendency is that clownfish will stay awake and eventually get tired and stressed out, which could kill them.

Like humans, clownfish enjoy staying in the dark for sleep; they usually burrow down at the bottom of their tank or go to a favorite spot on coral. In the ocean, they are also nocturnal and prefer dim light without any presence of sunlight.

Why Do Clownfish Need To Sleep?

Clownfish need sleep to maintain their health. They use that period of inactivity to rejuvenate their bodies and organs. It is a therapeutic process, one that resets their system.

Scientists had previously researched how sleeping fish reacts to sleep deprivation. Therefore, they began with in-depth research on the sleep habits of clownfish and then prevented them from getting their 6-hour break from worries. The zebrafish had difficulty waking up the next day as their mouth and gills moved slowly. The researchers surmise that sleep deprivation was making it difficult for them to function during the day.

As such, fish sleep much like other animals. They do not suffer from a lack of sleep as severely as humans, but they still need it to function properly.

New fish owners often mistake a fish that never stops moving as being “asleep”, but it is actually just done resting. To know whether your clownfish is asleep or treating, the best thing to do is add some stimulus to the tank. Don’t startle the fish. Something they typically come out for that draws their attention would tell you if it was asleep.

Clownfish usually sleep at night, but some diseases will make them lethargic during the day as well. You shouldn’t presume that a fish’s inability to respond to stimuli is always because it is sleeping – look for patterns. If they are displaying inactivity each day at the same time then this is probably just laziness and not sleep.

One test of a clownfish’s health is the appearance of its body. White dots or ripped fins may indicate illness, while healthy fish should show normal body wear on their skin.

Beyond sleeping, your fish should also display periods of activity and alertness. If it is too sluggish for hours on end or shows no signs of life at all, then the chances are good that you’ve lost this particular fish to disease.

Humans need to sleep every day- fish and other animals do too. But don’t assume a pet is sleeping just because it isn’t moving; they have an active part in the night/day cycle like humans. Sleep is risky for fish unless they are in a protected environment. When fishes live in the wild, their sleep can be interrupted by a predator.

Some fish sleep by lying down on the bottom of the tank. You may have seen this behavior in Clownfish like Nemo, who lay at the bottom looking as if they are dead.

Clownfish typically sleep “posterior end” up. Other fish, meanwhile, will burrow into a substrate in either swimming or drifting modes of operation. These are the least alarming because they don’t look like they’re dead and, quite frankly, we have no idea what is happening to them at those depths.

When Do Clownfish Sleep?

Sleep is typically associated with nighttime, but due to the nature of their daily routine, many fish doze at day and awaken at night.

Nocturnal fish are a challenge to keep at home as they might see sleeping tankmates as an easy meal. Fortunately, clownfish don’t sleep during the nighttime like humans do, which is helpful if you have nocturnals in your tank.

Clownfish spend their days swimming, hunting, and mating. After the sun sets, they become inactive and unresponsive. They tend to sink to the bottom of their tank to find darkness.

Overly shady areas can disrupt the sleeping patterns of a clownfish. This is due to disruptions in its basic circadian rhythm. If you plan to keep your fish tank permanently on an indoor window sill, it’s best to mimic natural light cycles as much as possible by turning lights off and letting the sunshine through during daytime hours.

Clownfish remain awake more often than they sleep, but it is bad for their health. This is the reason why new fish owners are recommended to create a fixed daytime and nighttime routine for their tanks by using automated lights.

Healthy sleep is one of the most important parts of a healthy lifestyle. In order to make sure your aquatic life has a sufficient amount of rest, you must ensure that your tank gets twelve hours with light and twelve hours without. This will allow them to establish their circadian rhythm slowly and naturally so they can lead happy lives in captivity.

Not everyone knows that natural light in aquariums can be unreliable. The intensity and color of the light are based on weather conditions, obstructions to the tank, and even where you put your tank. An example of people who need reliable sleep is the clownfish in an aquarium. You can’t rely on the room’s artificial lighting either because it too can be unreliable. What will happen when you do not remember to switch the light on? A lot of people sleep earlier or later depending on how early or late they were able to fall asleep at night.

These setbacks are going to affect the time when switching the lighting in your room, which leads to instability in your fish’s sleeping cycle. To maintain normal sleep times for their clownfish, consider purchasing a light with a timer.

Yes, clownfish do sleep, especially during nighttime. At this point, they will lay motionlessly at the bottom of the tanks and will be difficult to arouse. Clownfish may also sleep inside anemones, hovering without any significant movement. That allows them to stay out of predators’ sight.

Can you realize a sleeping clownfish?

Like almost fish, clownfish don’t have eyelids. Therefore, it’s very hard to take notice of whether they are sleeping or not.

What is the normal behavior of clownfish when sleeping?

An inexperienced fish owner may think his or her fish are awake, but in reality, they are not. To tell if they are just “sleeping”, add some food to the tank and observe the response. If its eyes don’t open when food is introduced, it’s probably asleep rather than moving slowly.
The behavior of sleeping is never used to identify a lack of sleep. A fish may not react as much in response to external stimuli, but this should not be interpreted that it’s asleep. The clownfish activity is one way we can tell if it’s actually sleeping or not, but it might come with other symptoms such as torn fins or white dots.

Do clownfish only sleep at nighttime?

No, their sleep can happen at every time in a day. Clownfish sleep at different times, depending on the time of year or geographic location. If your tank is in a shady spot like an aquarium, activity may be limited to daytimes. But if you leave artificial light on all day and night as you would for saltwater coral reef tanks, your clownfish can never really rest.

Some say that happier fish live longer and can gain energy with more rest. Clownfish can sleep peacefully in the dark, and for good fish-keeping, it is important to consider what is the most comfortable environment for them.

I do hope that after reading my article, you should feel confident that clownfish sleep. As your tank matures, you will have a better idea of the difference between normal yawning and an illness in one of your fish. If you’re still unsure what to do about it, please consult with someone who is experienced in raising pet marine life near you.