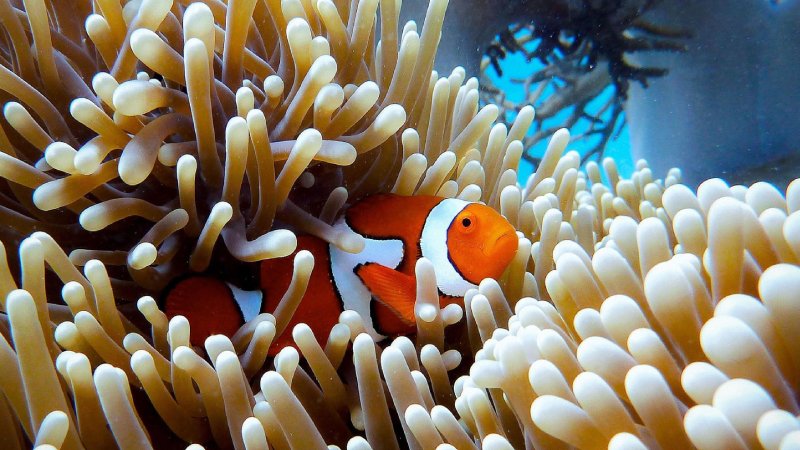 Are you really interested to know whether or not clownfish sleep? Since they don’t have eyelids, it was difficult for you to tell if they behave like humans during nighttime. More importantly, we wanted to distinguish between typical sleeping patterns and ongoing diseases.

I am a fish ower and I have research further information in the Internet. So, in this article, I will elaborate on the question “do clownfish sleep” and the typical behavior of clownfish present during their sleep. After that, you know how to distinguish between sleepiness behavior and impaired health conditions.

Yes, clownfish do sleep, especially during nighttime. At this point, they will lay motionlessly at the bottom of the tanks. They are difficult to awaken during this process. Clownfish also sleep inside anemones, hovering without any significant movement. That prevents predators from seeing them as they doze off.

How the Fish Sleeps?

Many people believe that most animals sleep at regular intervals; you can tell an animal is sleeping because it will have its eyes closed. It may also find a comfortable spot and lie down during this period of time when the brain shuts down.

However, what is special about clownfish is that they are fish. They live underwater. Do they also lie down when they sleep? And if they do, what about their eyes? Do they close them during this period of rest?

Clownfish sleep just like most other fish, with regular periods during which they take a rest. You may not know this unless you have observed your clownfish at night to see evidence of it happening.

Still, clownfish can’t sleep in the same way as people do. As was mentioned above, they live in water. So, they can’t just lie on their side. Or rather, they can, but some of them don’t. Clownfish do not have eyelids. So, they can’t be expected to close their eyes. They are going to keep their eyes open when they sleep. They will become inactive while sleeping, however.

Each fish in an aquarium will exhibit different behavior. Although some fish will entirely avoid moving, others will move slower while sleeping. They all sleep, but for ventilation in their gills, they must remain moving.

The Behavior Of Clownfish While Sleeping

It’s a common misconception that fish are not able to sleep at all due to their constant motion. It takes them a while to learn to read the signs.

The best way to tell if your clownfish is sleeping is by using stimuli. Don’t set off the fish, and do something that would typically grab their attention, like adding food. If they don’t react, even though their eyes are open? It’s asleep!

The best way to tell if your clownfish is truly asleep or merely swimming slowly is to add some stimuli to the tank. Don’t startle the fish. Do something that would typically draw the creature’s attention. One option for stimulation may be adding food to the water. Your clownfish is asleep if it doesn’t respond even after its eyes are open.

Of course, some diseases will make your clownfish lethargic. you shouldn’t always presume that your fish do not respond to stimuli is a sign of sleep. If the creature shows the same level of inactivity during the same period each day, it is merely sleeping.

One way to tell if your clownfish are well rested is by observing their appearance. Look for white dots or ragged fins, both of which might suggest that they’re sick rather than sleeping. However, if they look perfectly fine, that should raise your suspicions that they are presenting asleep.

There should also be periods during which your fish is active and responsive. Otherwise, if it is continuously sluggish, that might be an indication that the fish is diseased. If your fish has been inactive for hours on end, then it might be diseased.

All clownfish do not exhibit the same behaviors when they sleep. Many will lie down to the bottom of a tank. This is often frightening for newcomers because while fish that are lying at the bottom look dead, this behavior is natural on their part.

When Do Clownfish Sleep?

Just as with humans, fish tend to sleep during the nighttime. When the day’s activities are over. Once the sun sets, clownfish become inactive and unresponsive as they seek out darkness on the bottom for sleeping.

If you keep your tank in a shaded area, the activity may also happen during daytime. The body clock of the clownfish could be controlled while it is out of its natural environment. If you leave lights on all day and night in aquariums, your clownfish will always stay up. You need to make sure that 12 hours of light and 12 hours of darkness are provided to your tank.

Also, to make your fish comfortable, private whenever it falls asleep you should add some plants to the tank. The most suitable one is the anemone.

Do Clownfish sleep on the sand?

Yes, they do sleep on the sand. It is normal so don’t worry about them.

Why do Clownfish sleep?

Clownfish need sleep just like humans to maintain their health. They use that period of inactivity to rejuvenate their bodies and organs. It is a therapeutic process, one that resets their system. Sleep is as essential to fish as it is to other animals. The lack of sleep does not harm clownfish as drastically as it does humans, but they still need it.

Do clownfish float sideways indicate that they are sleeping?

If your clownfish are floating on their side rather than swimming upright, that means trouble. At this point, I suggest that you scrutinize your fish. Look for white spots or ripped fins that may indicate your clownfish are sick.

Like humans and other kinds of fish, clownfish do sleep. The typical behavior they present is lying motionlessly at the bottom or inside anemones. The ideal time for them to do so is at night. Therefore, I encouraged to mimic the outdoor lightning hours inside your tank.

I hope my article had answered your question regarding whether or not clownfish sleep. As you raise them longer, you’ll learn to distinguish typical sleep behavior from symptoms of ongoing disease.