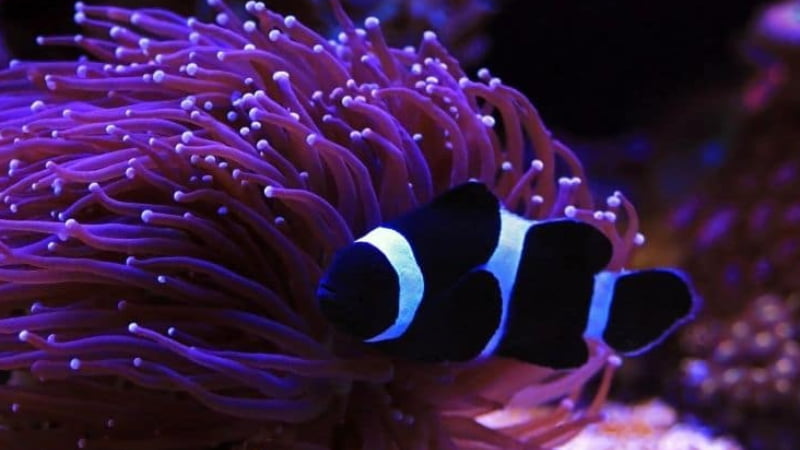 Clownfish are tiny saltwater fish that live in the Pacific and Indian seas. They are popular among aquarium owners because of their vibrant colours. Clownfish are marine clowns who thrill and entertain their human companions with their clown-like antics.

Clownfish, on the other hand, have a serious side. They develop quickly! In this blog article, we’ll discuss Clownfish growth rate and how they mature throughout their lives!

Let’s look at some specific types of clownfish and find out how fast clownfish growth rate .

The Ocellaris is the most common clownfish species in saltwater aquariums, with over 30 species identified. They’re simple to look after and don’t require any special watering.

They do nicely with other tankmates and may be kept in tiny tanks of approximately 20 gallons. When young, smaller clownfish can be maintained in 10-gallon aquariums. When bought, Ocellaris clowns can be as tiny as 0.5”-1”.

They typically grow 0.5” in the first year, then another 0.5-1” the following year, eventually reaching a full size of 3” when completely matured. This might take anywhere between two and three years.

It’s tough to be accurate when there are so many factors involved. It’s uncommon to see them grow larger than 3 inches, but it does happen.

One of my favourite clownfish is the Darwin. They are black with white stripes and are a variation of the normal Ocellaris. The Darwin clownfish will grow at a comparable rate as the Ocellaris, although it may reach a somewhat bigger size. Expect them to grow at a rate of 0.5”-1” each year until they reach full maturity. They have the same personality as ordinary Ocellaris clownfish.

One of the most violent clownfishes is the maroon clownfish. Unless it’s a bonded couple, they usually won’t accept another clownfish in the aquarium. If there is an anemone in the tank, they will guard it, which adds to their hostility.

The body of the Maroon clown is dark maroon with vertical stripes. They may grow to be considerably bigger than other clownfish, reaching 5-6” in length.

They may live for 6-7 years and grow at a pace of one inch each year. These fish require a tank with a capacity of at least 30 gallons.

The Tomato clownfish resembles the Maroon clownfish in appearance. They are hostile as well, although not to the same extent. Tomato clowns are robust fish that are excellent for beginners.

Their bodies are orange with a single white stripe along the middle. When fully mature, they may reach a height of 5-6” and grow at a pace of 1” each year.

The Frostbite is a unique designer clownfish that isn’t as well-known as the others. They’re a kind of Ocellaris clown with Wyoming white and Snowflake genetics.

The majority of their body is white, with orange accents and black dots. They are calm clownfish that may be kept in nano-sized saltwater aquariums.

When fully developed, they may reach a height of 4”, although most people see them at approximately 3”. They will grow at a pace of 0.5”-1” each year, similar to other Ocellaris clownfish.

They will only grow to 0.5” in the first year, then continue to develop at a slightly faster rate.

As you can see, most clownfish develop at around the same rate. Although some develop faster than others, their growth rates are nearly identical. It will take at least a few years for most clownfish to achieve maximum size.

It’s difficult to predict how big your clownfish will grow. There are several elements that influence a fish’s growth rate. The kind, gender, or overall health of the animal.

Even though the clownfish belong to a specific kind, this does not guarantee that they will grow in the same way as the others. Adult fish, like people, are not all the same size. The following are the factors that have the greatest impact on the rate of growth of clownfish:

The clownfish’s size is most affected by regular feedings and tank size. The excessive nitrates and inconsistent feedings in smaller tanks might stifle its growth.

Sexual maturity also has a significant influence. Females are often bigger than men. Sexual maturity will develop sooner if there are more than one clownfish in the aquarium.

Clownfish’s general health is also an essential growth element. Health issues in their early years of life might stifle their development.

Why Are My Clownfish Not Growing?

Your clownfish may not be growing for a variety of reasons. Keep in mind that they are sluggish growers that may only produce a tiny quantity each year. The difference in the size of some tiny clownfish might be difficult to observe. Feeding is also a consideration. The amount of food and the frequency with which they are fed are both important.

Poor water quality can cause significant health issues, and plants may not grow as well as they should. Clownfish are hermaphrodites, which means the female grows to be bigger than the male.

How long do clownfish take to grow?

When bought, Ocellaris clowns can be as tiny as 0.5”-1”. They typically grow 0.5” in the first year, then another 0.5-1” the following year, eventually reaching a full size of 3” when completely matured. This might take anywhere between two and three years.

How do you make clownfish grow faster?

What do people feed clownfish and how often do they feed them to encourage them to grow to reach 2 1/4 inches long? To get fish to grow large quickly, all you have to do is feed them a lot.

How long does it take a Clown Loach to reach full size?

While growth rates vary, in less than two years, clown loaches should reach a length of 4-5 inches. Every year following that, they grow approximately 1/2 to 2 inches. In six months, one of my latest acquisitions has grown from 1.5 inches to 5 inches.

If you want to raise clownfish, you must first understand their growth rate so that you may have the finest techniques for producing clownfish.