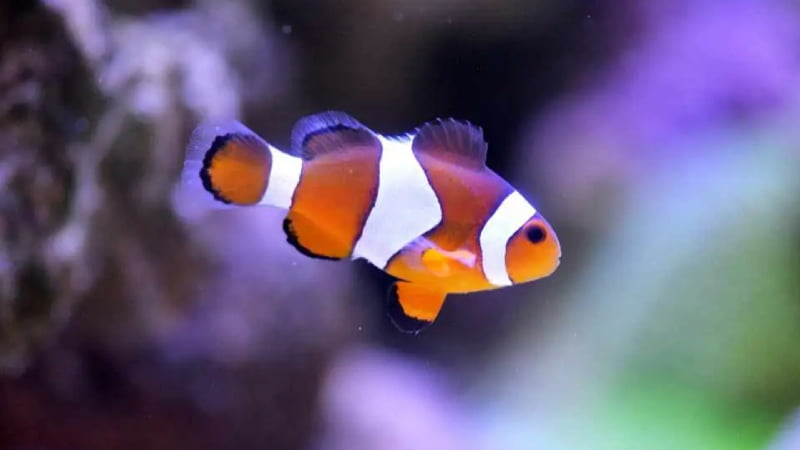 Here are three symptoms of swim bladders diseases in clownfish and treatment options for swim bladder disease in saltwater aquariums.

All clownfish have an organ that floats them in the water. The organ is called a swim bladder and weighs them down until they can release gas to keep them at the right level of buoyancy. A fish with a disease affecting their swim bladder may need help keeping their air bladder inflated or deflated to keep from sinking

A swim bladder is an organ that allows a clownfish to adjust its buoyancy. Clownfish without this capability relies on capillarity for their buoyancy. Clownfish are one of many species that suffer from conditions that interfere with this mechanism, losing the ability to control their buoyancy and sink into the seafloor or rise towards the surface where they cannot breathe.

What Is Swim Bladder Disease?

Swim bladder disease is a term used to describe a sick or injured fish unable to hold itself upright or maintain its position in the water.

Swim bladder disorder is a condition when the swim bladder does not function normally due to disease, physical abnormalities, mechanical/environmental factors, or for reasons that cannot be diagnosed. Affected fish will exhibit problems with buoyancy which includes difficulty controlling their ability to float or sink.

Find Out The Symptoms Of Swim Bladder Disease

A common symptom of swim bladder disease is a fish that has trouble staying upright with its head up or so does not rise to the surface.

Some fish with swim bladder disease bob back and forth in the water, down then up. Other times they may just appear to be laboring or swimming really hard just to stay in place.

Why Is A Clownfish Being Swim Bladder Disorder?

This disorder can be caused by compression of the swim bladder, which may be exacerbated when a fish gulps air and eats rapidly. Eating freeze-dried or dry flake food that expands when it becomes wet can also lead to an enlarged stomach or intestinal tract.

There are some reasons that lead to swim bladder disease:

If a swim bladder disorder is caused by an enlarged stomach or intestine, feed the fish for three days without food. At the same time, keep your water temperature at 78-80 degrees and don’t change anything else during treatment.

Feed the fish a cooked and skinned pea on day four. Frozen peas are best because they can be microwaved or boiled for a few seconds, which will produce the right consistency (neither too soft nor too firm).

Feed a pea, or similar-sized food item to the fish and continue this for a few days. Then, replace with a species-appropriate food source that will not float such as cooked seafood pieces.

If your fish is showing signs of swim bladder disease, it may be due to an infection. Such infections can often be treated with a broad-spectrum antibiotic from your vet

Basing on the causes, I recommend some other treatments as following:

Clownfish are saltwater fish that are easy to care for. They have long lifespans and don’t usually cause any problems for their owners. Therefore, try your best to apply these below advice to protect your clownfish from getting swim bladder disease:

Clownfish are tropical fish and, as such, need temperatures to be kept at 72-78 deg F, salinity at 1.020 to 1.025sg. The pH in saltwater aquariums should be kept between 8.1 and 8.4 with alkalinity remaining somewhere between 8 dkh and 12 dkh

To keep your fish healthy, it’s a good idea to test water parameters weekly. This way, adjustments can be made before any problems emerge or the fish get stressed out.

Clownfish can eat both plants and live food. Offer some variety with their diets such as marine flakes, pellets, frozen fish food, and seaweed sheets. Clownfish’s favorite is shrimp; mysids, krill, or brine will do just fine.

Always soak your fish flake in tank water before feeding them. This will prevent the food from bloating and becoming indigestible to your fish. For better nutritional content, you can use liquid marine vitamins like silicon or garlic oil once or twice a week to soak the food instead of only relying on freshwater.

Do not feed frozen food to clownfish. Thaw a cube and drain the water before putting it in the tank.

Clownfish will also do well to eat vegetables such as chard, spinach, spirulina, and nori.

Clownfish are not choosy eaters, but their health depends on a varied diet. Feed them slowly and be prepared to add some food to the tank if your clownfish refuse it all at once. Feeding should be done in two small sessions per day.

Always make sure all your fish are treated well, and inspect them regularly for any signs of injury.

Providing hiding and play areas for your saltwater tank can be difficult without the addition of an anemone. Corals, clams, and live rock are all fitting options in a tank with no cavity animals.

What is a swim bladder?

As with most of their anatomy, the swim bladder of a fish is responsible for balancing both their swim and buoyancy activities.
A swim bladder, which is known as an air bladder, is filled with gas and placed near the center of a fish. It’s associated with the ball on the spinal column.
Fish have swim bladders, but not all of them do.

What are the sights when a clownfish having a swim bladder disorder disease?

Fish suffering from swim bladder disorder exhibit a variety of symptoms, including sinking to the bottom or floating at the top of the tank, floating upside down or on their sides, or struggling to maintain a normal buoyancy.
Other physical signs of swim bladder disease may also be present in the affected fish. Affected fish may eat normally, or have no appetite at all. If severe buoyancy problems exist, the fish may not be able to feed properly and/or reach up for oxygen, depending on where it is in its cycle of illness.

What leads to swimming bladder disease?

Despite not knowing the root cause of swim bladder disease, many theories have been proposed.
Theories include: A difference in salinity between home and public aquariums causes fish to drink more than they would at home, changes in diet-related to behavior changes or signs of illness, etc

Multiple issues are responsible for a swim bladder disorder, not just one. The disease is most commonly seen in goldfish and bettas but can affect virtually any animal.

If your clownfish has any of those symptoms above, hope my article will help with your problems. Many thanks for reading!